A black hole in the M87 galaxy photographed by EHT team

The EHT project has spent years on a singular mission: to capture images of the immediate environment of the supermassive black hole Sagittarius A*, which is at the center of the Milky Way. Also on EHT’s agenda has been to try documenting an even larger black hole in the Messier 87 galaxy, which is a little over 50 million light-years from our planet.

“6.5 billion times the mass of our Sun exists… and now we’ve got photographic evidence of one.”

“What you’re about to see will demonstrate an imprint on people’s memories,” Dr. Cordova from the NSF says.

“We believe even supermassive black holes exist…. and while they’re small, we know they can outshine all the other stars in the vicinity,” Dr. Shep Doeleman from the NSF says.

The Black Hole, which measures 40 billion kilometers across–or nearly three million times the size of our planet– has been described as a cosmic monster’.

The Black Hole is located some 500 million, trillion kilometers away, in a distant galaxy. The very first image fo the black hole was photographed by astronomers making use of a network of interconnected telescopes located around the world.

Details of the massive black hole have been published today in Astrophysical Journal Letters.

The first image of a black hole shows an intense bright ring of fire surrounding what seems to a spherical dark hole. The bright halo surrounding the black hole is created by superheated gas falling into the hole.

The light we see int he image appears brighter than all the billions of other solar systems in the galaxy combined, which is one of the main reasons why astronomers were able to photograph it at such a long distance from Earth. 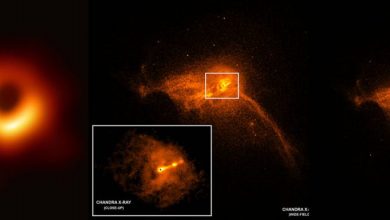 First Ever Image of a Black Hole Could be Released Today During Global Press Conference, Here’s How to Watch

Scientists Photograph a Black Hole Located 50 million light-years Away; Here’s What You Need to Know