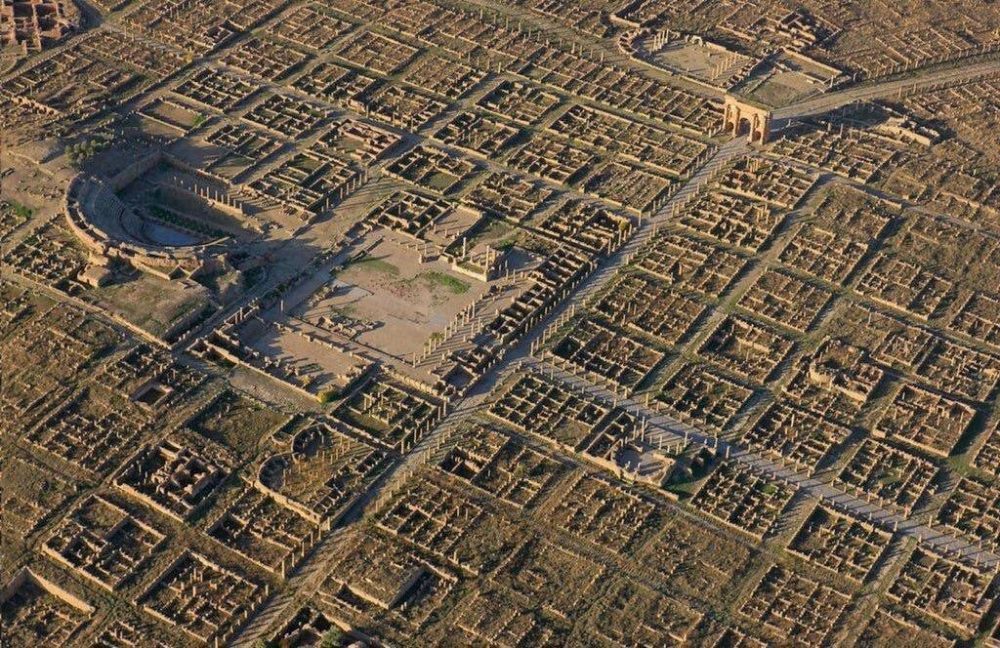 Few ancient remains around the world have remained in such good condition as the Roman city of Timgad.

Lost in the Algerian desert, the ancient outpost of the Roman Empire, Timgad is one of the most impressive abandoned cities in the world. Little known by comparison with Pompeii, Timgad, or Thamugadi, remains one of the best-preserved examples of Roman urban planning in the world.

Chronology of discoveries and excavations in the Roman Ghost City

Timgad was first discovered in the 18th century by the British explorer James Bruce. In Great Britain, however, the news of the find was received with skepticism: Bruce was simply not believed. A full excavation began over 100 years later and ended in the 1950s.

It’s easy to imagine the excitement of James Bruce, who stumbled across the ruins in 1765. Bruce became the first European to visit Timgad in several hundred years. He called the city, then almost completely hidden in the desert, “small, but full of elegant buildings.”

James and his companions cleaned several statues of Emperor Antoninus Pius by hand. In 1765, photography had not yet been invented, and the travelers could not take the sculptures with them, so they buried them in the sand again.

When Bruce returned to the UK, his stories were not taken into account, and no one looked for Timgad. Offended by the bias towards his story, Bruce soon retired, and no one became interested in the mysterious city for another hundred years.

Bruce’s research was continued by the British diplomat Lambert Playfer, who, inspired by the scientist’s diaries, which described in detail the finds in Timgad, went to study this place. In his book Travels in the Footsteps of Bruce in Algeria and Tunis, Playfer described the city he had found.

In 1881, control of the region passed to France, when large-scale excavations were finally initiated. They continued until Algeria gained independence in 1959.

Archaeologists have concluded that despite the desolation in which the city was built, its inhabitants enjoyed a luxurious and comfortable lifestyle. What made the Romans build a thriving colony in such a place?

What was the true intent behind the building of Timgad?

Explained in the simplest way, the Roman expansion in North Africa was not met without fierce opposition by the local nomadic tribes.

The Romans officially founded Timgad as a settlement for retired soldiers of the empire, but their goal was actually to establish a better connection with the local residents and weaken their resistance.

Evidently, this was a truly successful plan as locals were attracted by the comfortable life in the Roman city and searched for ways to be accepted into Timgad. Initially, the only possible way was through 25 years of service in the Roman Legion. This was the only way to obtain Roman citizenship for yourself or your family.

Аfter several generations, its population grew to 10 thousand people and consisted of Romans, Africans, and Berbers. Most of them have never seen Rome, but the city authorities tried to instill in the local residents with imperial culture and belonging, despite the distance from the capital.

Granting Roman citizenship to residents of other countries (and in this case continents) was a deliberate strategy of the empire. The Romans knew it was better to let people in than to keep them outside. In exchange for loyalty, local elites received a share in the powerful empire, its protection, and laws, as well as urban amenities: baths, theaters, and libraries.

Many of the buildings that once stood in this marvelous city have remained intact to this day. Excavations have found marvelous mosaics in various locations, a total of 14 baths, a 12-meter sandstone triumphal arch, a 3,500-seat theater, a richly decorated basilica, and even a rare Roman public library from the 2nd century.

How did a thriving Ancient Roman City turn into a ghost town?

The Roman City of Timgad began to flourish soon after it was founded by Emperor Trajan. From a town built for war heroes and veterans, it became one of the major trade points in the Empire as well as a source for important goods like grain, wine, and olive oil.

The only people whose life was not good were the local farmers who, unfortunately, were not well paid for their production. Together with the excessive taxes, at some point, it forced them to rebel against the authorities. This began a series of civil wars and religious conflicts.

Add the endless barbarian invasions that weakened the Roman influence in the region and we can fast-forward to the 6th century when the Arabs burned down the city and left it into oblivion for a millennium.

Archaeologists excavating the remains of Timgad were amazed by a Latin inscription they found on the forum. It reads: “Hunting, bathing, playing games and laughing. This is life! ”A French historian said that this “testifies to a philosophy that may be devoid of ambition, but some would take it as the secret of wisdom ”.

In fact, the Romans lived this way for many years. The apostle Saint Paul in the first century spoke of people whose philosophy in life was “Let us eat and drink, for tomorrow we die.”

Although they were religious, the Romans lived for pleasure at the moment, without thinking much about the meaning and purpose of life. Although the people of Timgad died 1,500 years ago, perceptions of life have not changed much. Many today live only for the present. For them, the view of the Romans is quite logical and they do not think about the consequences.