Venus is the second planet in the solar system in order of distance from the Sun, the sixth in size, ordered from highest to lowest.

It receives its name in honor of Venus, the Roman goddess of love.

It is a planet of rocky and terrestrial type, often called the sister planet of the Earth, since both are similar in size, mass, and composition, although totally different in thermal and atmospheric matters (the average temperature of Venus is of 463.85 ºC).

Venus, in other words, is a hellish place of infernal temperatures. It is home to a corrosive atmosphere and crushing pressure at the planet’s surface.

And to do so, they’ve come up with a conceptual manned mission to Venus, named the High Altitude Venus Operational Concept – (HAVOC).

This crewed NASA mission concept contemplates the entirety of the human portions of the missions to be conducted from lighter than aircraft or from orbit and de-emphasizes traditional landings.

But could we actually make something like this work? Temperatures on Venus are infernal as we already wrote above.

In fact, despite being the second planet from the sun, its hotter than the planet Mercury which is the Sun’s direct neighbor.

The temperature on Venus, 463.85 ºC, is higher than the melting point of many metals including bismuth and lead, which may even fall as ‘snow’ onto the higher mountain peaks on the planet’s surface.

The barren rocky landscape of Venus is made out of vas plains composed of basaltic rock, featuring countless volcanic features as well as several continent-scale mountainous regions.

The planet is also geologically young and has undergone a number of catastrophic resurfacing events.

This makes Venus a terrible candidate to visit.

But luckily NASA doesn’t plan to land mankind on its surface but use the planet’s dense atmosphere as a base of exploration, composed of a city of airships high above the surface.

No date has yet been set for the HAVOC mission, but NASA has already stated its a long-term mission that will initially rely on small test missions to be successful.

The best part is that we already have the necessary technology to create such an airship city in Venus’ atmosphere.

In fact, the more we think about a mission in the dense upper atmosphere of Venus the more awesome it gets.

At altitudes between 50 and 60 kilometers above the surface of the planet, the pressure and temperature on Venus can be compared to regions of the Earth’s lower atmosphere.

An astronaut could survive without a pressure suit, as it is roughly equivalent to the air pressure you would encounter at the summit of Mount Kilimanjaro. Furthermore, you would have no need from insulating yourself as the temperature at that altitude rages between 20 and 30 degrees Celsius. 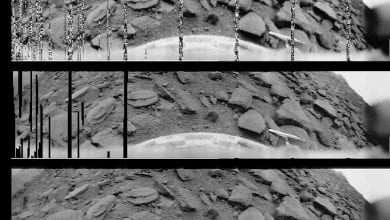 We Landed on Venus Exactly 45 Years Ago; Here Are The Surface Images