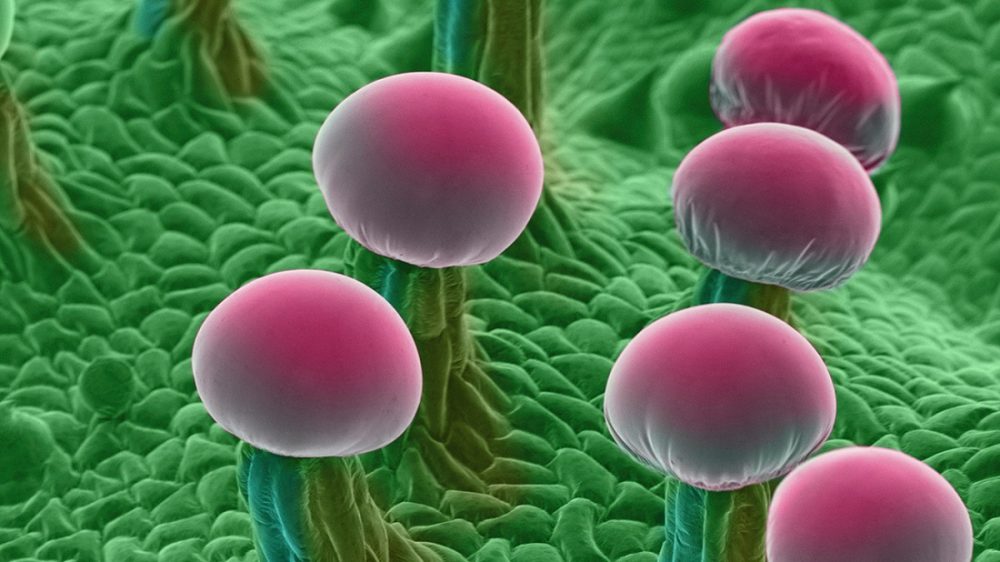 To some, this image may look like a weird alien life form. However, what you see here is what cannabis looks like in detailed microscopic scans.

New, fascinating microscopic scans show marijuana in unprecedented detail, pinpointing even the sacs that store the psychoactive chemical THC (tetrahydrocannabinol) on the ends of individual hairs.

According to a professor who prepared marijuana for its close-up photo shoot, the samples take several hours to prepare and have to be dried out so water vapor doesn’t mess with the final images.

After the samples are ready, they are photographed inside a vacuum chamber using a computer scanner that records each image in about four minutes.

Speaking to the Business Insider, Professor Ted Kinsman from the Rochester Institute of Technology who is the author of ‘Cannabis: Marijuana Under the Microscope‘ said:

“I like to think what a person would see if they were just a few microns tall.”

The images are stunning.

Prof. Kinsman gives the HC-containing cannabis sacs–responsible for getting people high when they smoke marijuana–a brighter color so they stand out in the images.

The samples eventually are coated with gold, and bombarded with electrons, after which a computer records how the electrons are scattered away from each sample.

Data is then collected and an image is generated using the SEM, the scanning electron microscope.

Professor Kinsman’s images reveal never-before-seen details and appear to also show how hair-like trichomes on the planet form a matt of thorns that protect the center of the stem from insect attack.

Some scientists believe that marijuana could help people with autism, eczema, psoriasis and even Alzheimer.