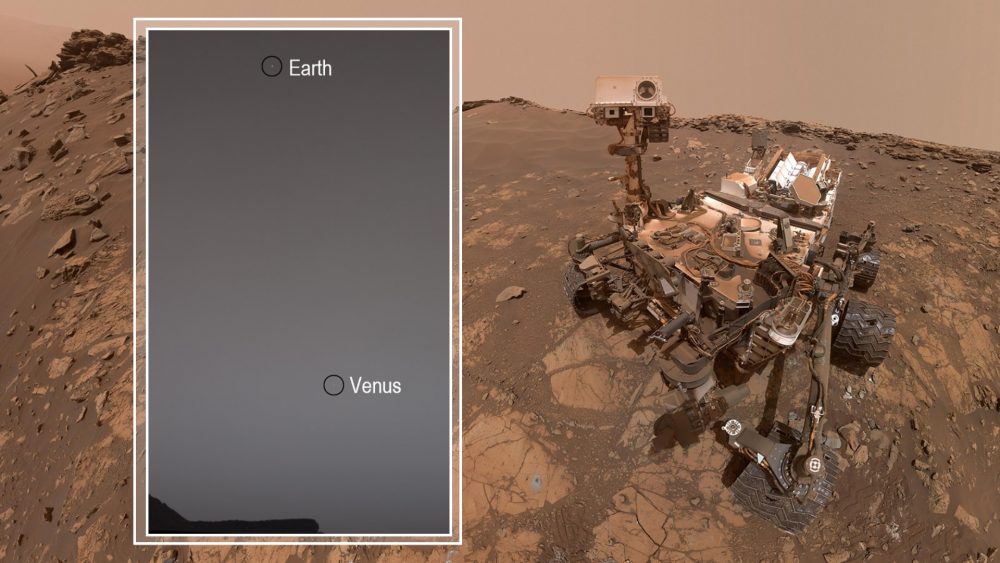 Here's what Earth and Venus look like, as seen from the surface of Mars.

This image taken from the surface of Mars shows what Earth and Venus look like from the perspective of someone standing on the red planet, looking towards Earth.

As you are reading this, NASA’s Curiosity rover is exploring the surface of the red planet, helping us better understand how Mars formed, whether it had life on its surface, and what eventually led to its demise. Along the way, the multi-billion-dollar rover takes images of Mars and its surroundings. Perhaps nostalgic of home, the rover turns its cameras towards the sky, looking for home from time to time. Earth.

Earth and Venus as seen from Mars

The latest image from Mars taken by Curiosity not only shows our home planet as seen from the surface of Mars, but it also features a faint view of Venus. It is a beautiful image that shows what our planet looks like from the surface of an alien world. Both Earth and Venus appear in the Martian sky as no more than pinpoints of light, owing the unperfect view to a combination of distance and dust in the air; Earth and Venus would otherwise look far brighter in the sky.

During the late Martian spring, there are often many dust particles suspended in the air. They reflect sunlight, illuminating the atmosphere and making it difficult to see objects in the sky.

“Even moderately bright stars were not visible when this image of Venus was taken,” Mark Lemmon of the Space Science Institute in Boulder, Colorado, said. “Earth also has bright twilights after some large volcanic eruptions.”

As revealed by NASA, The panoramic image, which is composed of two photographs, was taken 75 minutes after local dusk on June 5, 2020 (or sol 2,784 from the Curiosity mission).

To snap the image of Earth—and Venus—Curiosity used the same instrument commonly used to make panoramas, the Mast Camera, or Mastcam.

Although Curiosity’s image of Earth and Venus is a present surprise to us Earthlings, planet-watching was not the only goal of this sky-watching session; the mission scientists took time to study and analyze the luminosity of the Martian sunset.

NASA’s Curiosity rover is located just below the equator, in a large crater called Gale.

The red planet takes 687 Earth days to orbit our Sun, and a typical day lasts 37 minutes longer than on Earth.

Back in 2014, when Curiosity turned its cameras towards Earth and its moon, “the color and brightness of the sky were significantly different than from these most recent images because of all the high-altitude dust in the Martian air right now.”