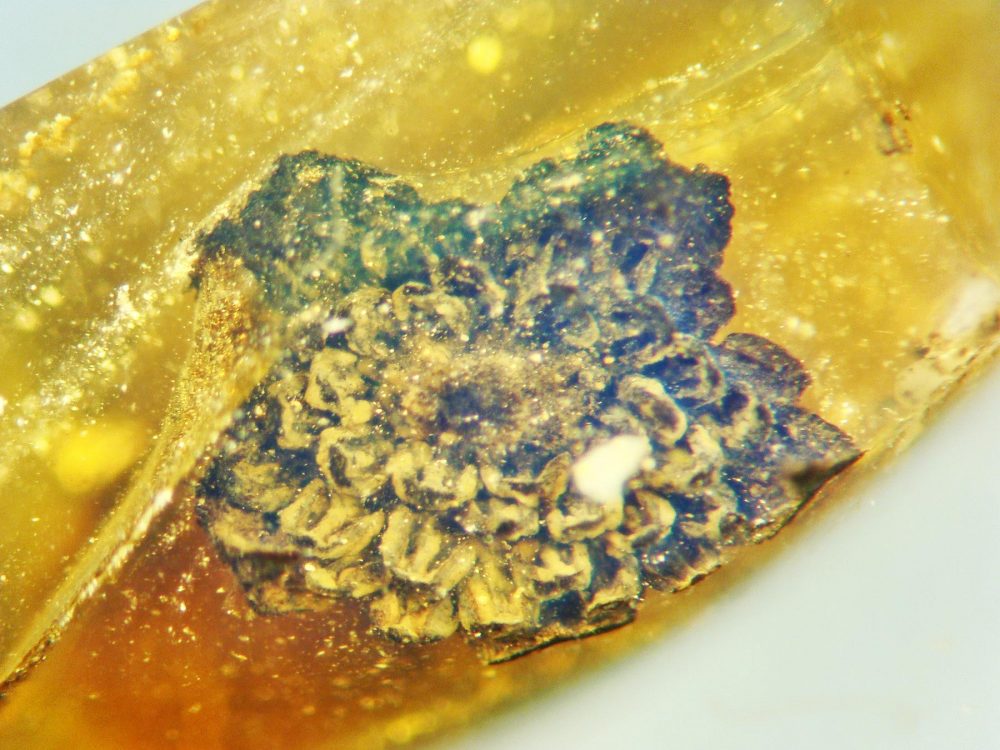 See how detailed the flower is and how well-preserved it is even 100 million years later.

A flower unknown to science was discovered in a fragment of Burmese amber, which is mined in the northeastern part of Myanmar. This ancient flower has now been named Valviloculus pleristaminis and belongs to the Cretaceous period which makes it about 100 million years old. Earlier, ancient insects were also found in Burmese amber, which were called the “transitional link” between wasps and bees.

The new species belongs to the order of laurel flowers (Laurales) and is closest to the modern family of Monimiaceae, common in the tropics, mainly in the southern hemisphere.

According to the well-known expert on the remains of plants and animals preserved in amber, George Poinar Jr., despite its modest appearance, the 100-million-year-old amber flower is beautiful, since it is part of a forest that grew almost a hundred million years ago.

The size of the flower is only two millimeters. It is a male (staminate) flower with six petals and about fifty stamens arranged in a spiral. Scientists were able to make out the constituent parts of the stamens: filaments and anthers with two pollen sacs in each.

The flower may have been part of a large inflorescence with both staminate and pistillate flowers. It has an ovoid hollow hypanthium – a part of a flower formed by an intergrown receptacle and a flower tube. Among modern plants, there is hypanthium, for example, in wild rose and pomegranate.

“Even though the size of the plant is so small, the details are perfectly preserved. Our sample was probably part of a larger heterosexual inflorescence, ”says University of Oregon professor George Poinar.

Scientists are confident that the flower grew in forests on the supercontinent of Gondwana and can tell a lot about the geological processes on Earth. Experts determine the time of the split of the supercontinent in different ways – it is believed that it occurred from 200 to 500 million years ago.

Biologists say that angiosperms like Valviloculus pleristaminis only started spreading 100 million years ago. This means that the division of Gondwana, which once included Africa, South America, Antarctica, Australia, Madagascar, Hindustan, and New Zealand, may have happened much later than previously thought.

It is curious that this is not the first unexpected discovery of this kind. George Poinar’s team had a similar find three years ago in 2017 when they described another 99 million-year-old flower found in amber, belonging to the Araucariaceae family.

In case you haven’t heard of the previous discovery either, the flowers found in amber were also miniature – only 3.4 – 5 millimeters in size. However, just like the new Valviloculus pleristaminis specimen, a good look under a microscope revealed their incredible characteristics.

They have five sepals, nectar discs, on some flowers you can see ovaries (the lower parts of the pistils) with protruding ribs. The researchers determined that the flowers are related to another ancient species found in amber – Tropidogyne pikei, which was previously described by the same group of scientists.

Overall, I think we need to appreciate such findings much more than we do now. Although they do not seem significant compared to what is happening now in the world or to discoveries that could change our future, these discoveries reveal much about the planet’s past and life as it once was, while they also remind us and how unique nature is. Who would have thought that such things could be found during the mining of amber?