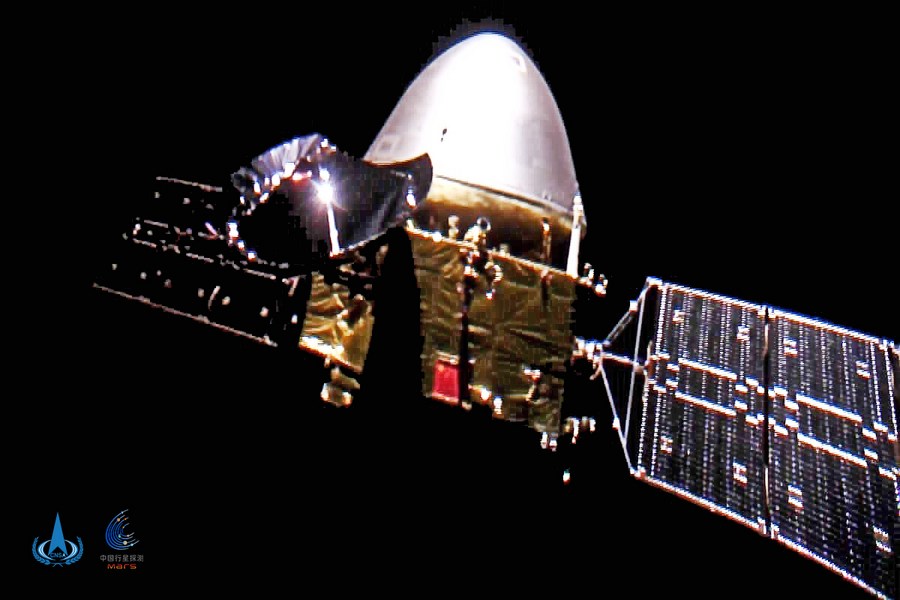 The spacecraft is expected to land on Mars in February 2021.

There’s a spacecraft heading towards Mars, launched in July 2020 by the National Space Administration of China, the CNSA. As it makes its way to the red planet, the Tianwen-1 mission–which carries a lander and a rover–sent back selfies from deep space to mission scientists on Earth.

The CNSA published images that the Tianwen 1 spacecraft snapped in deep space.

The photographs happen to coincide with China’s National Day. As revealed by Xinhua, “the images showed China’s five-star red flag dazzling with the golden orbiter and the silver lander and rover in the darkness of the universe.”

The flag on the spacecraft weighs no more than 144 grams according to Xinhua and is 39 centimeters long and 26 centimeters wide. To ensure the flag survives the harsh conditions of space, including solar radiation, it was “sprayed” onto the spacecraft with special materials as well as overprint technology, the Chinese Space Agency has revealed.

The CNSA launched the Tianwen mission on July 23, 2020. According to reports, all systems are go, and the spacecraft is expected to successfully land on the surface of the red planet in February 2021, curiously, the same month when NASA’s Perseverance rover is expected to touch down on Mars. So far, Tianwen has traveled over 188 million kilometers and still has a long way to go in order to reach Mars.

To take the “deep space” selfie, the probe was instructed to deploy a small satellite–the TW-1 deployable camera–attached to the spacecraft in order to take the image and test if the connection was working properly.

The CNSA revealed that an image was taken every second using the instruments two wide-angle lenses. The photographs were then transferred wirelessly to the spacecraft which eventually dispatched it to Earth.

The Tianwen 1 mission was designed to complete orbiting, landing, and roving in one mission, as per Xinhua.

The name of the mission originates from the long poem of the same name written by Qu Yuan, who was one of the greater poets in ancient China.

During the July 2020 Mars launch window, as many as three missions were sent to the red planet; NASA’s Perseverance rover, the Tianwen 1 mission, and the United Arab Emirates mission which includes the “Hope Orbiter.” All three missions are scheduled to arrive at Mars in February of next year.

The goal of the Tianwen 1 mission is probably somewhat similar to that of NASA; look for traces of past and current life on Mars. In addition to that, the lander and rover are expected to create new surface maps of the Martian landscape, as well as to investigate and probe the soil composition and water ice distribution of the surface.

Among other things, Tianwen 1 is expected to study the Martian atmosphere.

As I have already explained in previous articles, the red planet is expected to outshine not only Jupiter but Sirius as well in a cosmic event that will not repeat until the year 2035.

So make sure to grab a pair of binoculars, or a telescope and head out far from light pollution to observe Mars during the October 2020 “perihelic opposition.”