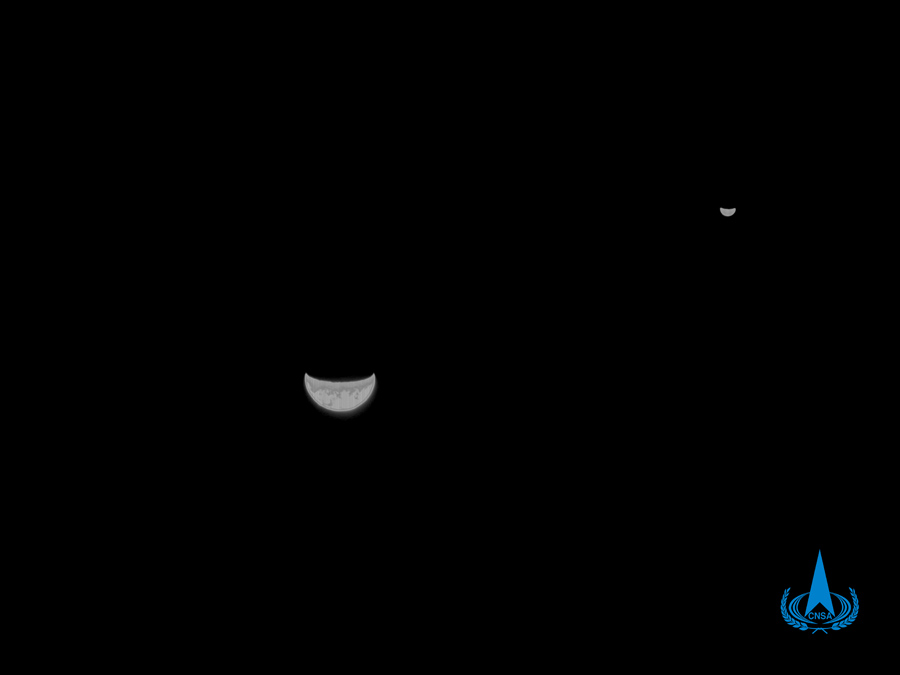 China's Tianwen-1 mission is heading to the red planet, but on its way, the spacecraft's cameras snapped a stunning image of the Moon and our planet.

The image shows a black-and-white photo of the Earth and the moon taken by the optical navigation sensor on July 27, 2020, when the Tianwen-1 probe flew about 1.2 million kilometers away from the Earth.

The Chinese Tianwen-1 mission, which is currently speeding away from the Earth towards the rated planet, carrying a lander and a rover, looked back at Earth and snapped a stunning view of our planet and its faithful companion.

Mission specialists at the Beijing Aerospace Flight Control Center worked closely with the test team of the China Aerospace Science and Technology Group to monitor the Tianwen-1 probe as it looked back at Earth and took this image, reports the CNSA (China National Space Agency).

Tianwen 1, the first Mars exploration mission by China, is in good flight condition, with energy balance, normal working conditions, stable trajectory measurement and tracking, flight control, and data reception, all of which work in an orderly and fluid manner.

The probe left Earth’s gravity sphere of influence, entered an interplanetary transfer orbit, and is currently at a distance of more than 1.,5 million kilometers from Earth.

With Tianwen-1, the China space agency officially kick-started its exploration of our solar system. The lander and rover were launched into orbit by a Long March 5 Y4 rocket, China’s largest launch vehicle, off the coast of Hainan province in South China at 3:41 UTC on July 23.

According to the China National Space Administration (CNSA), and quoted by Xinhua Tianwen-1’s destination is the Martian region of Utopia Planitia. The region is a large plain within Utopia, the largest acknowledged impact basin on the red planet and in the Solar System with an approximated diameter of 3300 km.

Tianwen-1 will conduct scientific research on the Martian soil, geological structure, environment, atmosphere, and water. The star of th emission is a 200-pound, six-wheeled rover which carries a dozen scientific instruments including ground-penetrating radar, camera, a weather station as well as a magnetic field detector. The mission aims to obtain important data from Mars that will help scientists better understand Mars, its environment, and geological history, but also look for traces of present or past life on Mars.

The mission is also expected to produce accurate maps of the Martian surface which would be used for the planning of future missions to the red planet.