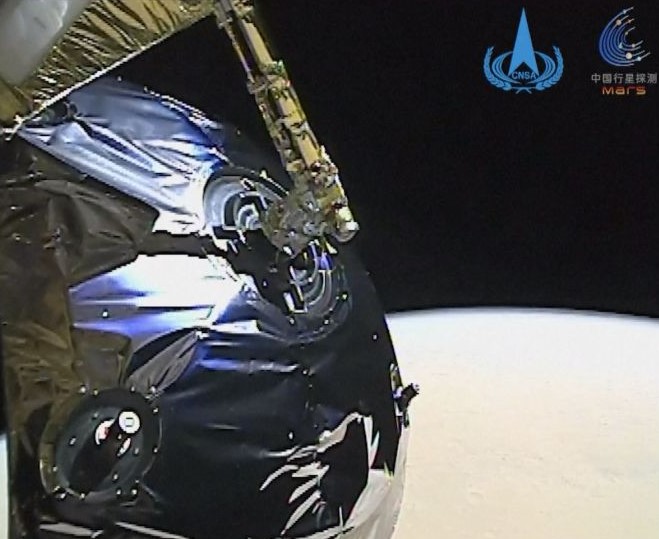 The China National Space Administration released a compilation of two videos captured by the Tianwen-1 orbiter.

The Chinese robotic mission “Tianwen-1”, which arrived safely around Mars on February 10, managed to capture a video as it entered orbit! Yesterday, two days later, the video was officially released.

The compilation of two videos clearly shows how Mars gradually enters the field of view of the camera, the vibrations on board after the engine is started, as well as the transition of the automatic interplanetary station from the daytime to the night half of the planet. Some of the components of Tianwen-1 are also clearly distinguishable.

I remind readers that the successful arrival of Tianwen-1 in orbit around Mars is another sign of China’s ambitions for the current 2021 year. In 2019, the country was the first to make a successful landing on the other side of the moon.

However, the big success came in December 2020 when the Chang’e 5 landing station landed on the visible side of our natural satellite, took samples from the rocks and chest, and delivered them to The Earth. It was the first two-way mission from Earth to the moon’s surface in more than four decades.

However, all the achievements of the Chinese over the past five years have been achieved through unmanned missions. China’s space program has not sent a man into space since 2016, but we expect that to change soon, as the ambitious construction of China’s first modular station in Earth orbit begins in spring.

As for “Tianwen-1”, the implementation of the scientific program of the expedition is yet to come. The automatic interplanetary station consists of an orbital compartment, a lander, and a rover. If all goes according to plan, in May or June the lander with the rover will have to make a soft landing on the Red Planet.

At present, the United States remains the only country in the world to achieve a soft landing on Mars with a working landing craft that managed to send information and photos after the landing and continued operating.

As for the brand new Tianwen-1 video of Mars, it is amazing, there is no doubt, but the quality is not the highest and it is in what I consider black and white.

Once the Tianwen-1 rover reaches the surface (hopefully), we can expect a plethora of high-quality images and videos of Mars because the rover is equipped with the same panoramic camera used for the Yutu-2 rover on the Moon. In case you want to see some incredible images from the Moon, captured by China’s mission, click here.

Other than capturing the surface of Mars, Tianwen-1’s rover will investigate the soil and water-ice distribution on the surface. It will also collect soil samples that will be stored until a later retrieval mission arrives in the upcoming years.

As for the Tianwen-1 orbiter, it will also continue to operate from the orbit, studying the surface and atmosphere. It is equipped with medium and high-resolution cameras, detectors for particles, and other equipment that should provide useful data for future missions to Mars.