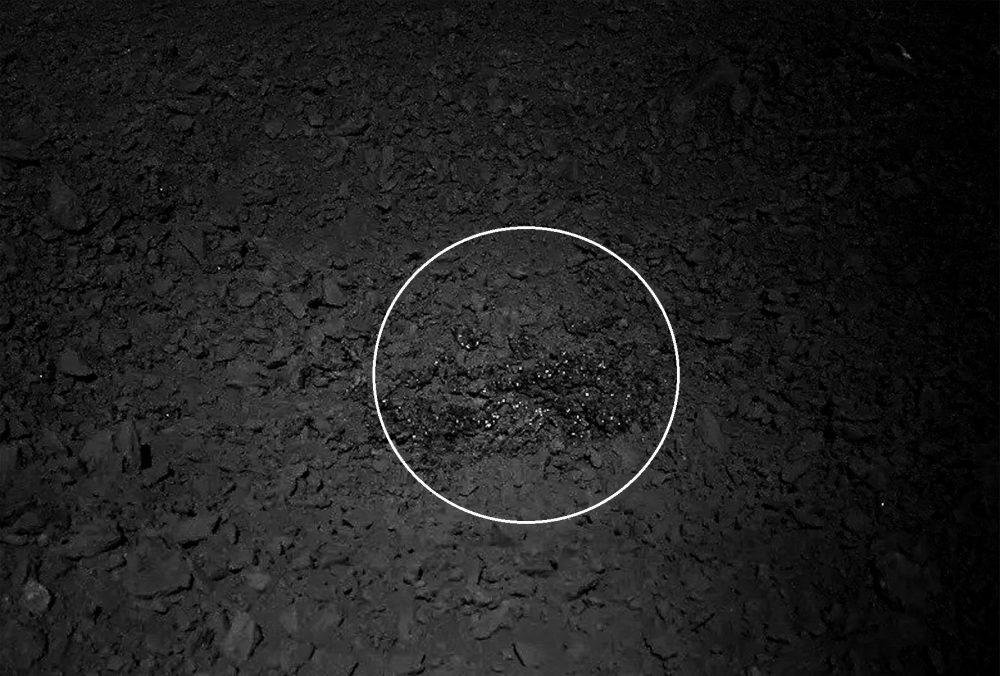 Although the material spotted by Yutu 2 was claimed to be a gel-like substance, it has been revealed how the material may actually be similar to what the Apollo 17 mission astronauts discovered on the near side of the moon when they found and recovered impact glass on the lunar surface.

Here are images of the gel-like substance the Yutu 2 rover from the Chinese Space Agency found on the moon’s far side.

While exploring the surface of Earth’s natural satellite, the Chang’e 4’s Yutu 2 rover spotted a weird lunar crater with something odd inside it: a kind of gel-like substance that looked like something straight out of an alien movie.

Was it alien tech? Was it traces of life? Was it something buried beneath the surface? Well, it may not be so sensational after all, say scientists who argue that the mystery gel-like substance may be more ordinary than we were hoping. New images released from the China Lunar Exploration Program have revealed the likely nature of the previously unidentified material.

The Yutu 2 rover spotted the odd material on the moon’s far side inside a small crater. The image it snapped revealed that the crater’s interior was filled with a material that was colored differently than its surroundings, featuring various birther spots.

The image was released by the Chinese science-outreach publication Our Space via its Weibo social media account (the social media post called the material jiao Zhuang wu, which means “gel-like”). From there, it made its way across the world, sparking sensationalistic claims.

Although the material spotted by Yutu 2 was claimed to be a gel-like substance, it has been revealed how the material may actually be similar to what the Apollo 17 mission astronauts discovered on the near side of the moon when they found and recovered impact glass on the lunar surface.

Experts have revealed that the substance spotted by Yutu 2 may actually be nothing more than precisely that, impact glass–also known as impactite and resembles trinitite.

Space.com refers to sample 70019, which was recovered from the lunar surface by astronaut Harrison Jack Schmitt. The substance is made of dark, broken fragments of minerals that seem to be cemented together and black shiny glass. This substance was most likely produced after a high-speed meteor impacted the lunar surface.

NASA Postdoctoral Program fellow at the Goddard Space Flight Center Daniel Moriarty revealed more clues about the alien material on the far side of the moon:

The shape of the fragments appears fairly similar to other materials in the area. What this tells us is that this material has a similar history as the surrounding material. It was broken up and fractured by impacts on the lunar surface, just like the surrounding soil.

I think the most reliable information here is that the material is relatively dark. It appears to have brighter material embedded within the larger, darker regions, although there is a chance that is light glinting off a smooth surface. But we’re definitely looking at a rock.

Chinese scientists in July of 2019 first spotted the odd material seen in the images. As it caught the experts’ eye, the researchers decided to drive the over towards the material to get a better look instead of continuing its planned journey. The first images the rover captured were of poor, low resolution and did not offer many clues about the odd substance.

Using its Visible and Near-Infrared Spectrometer (VNIS), Yutu 2 analyzed the bright spots in the middle of the crater. Further analysis of the material was done in August of 2019, but we have yet to see any of the studies’ results.

So far, we can only speculate as to what exactly the mysterious material is.

Although NASA experts believe the material is an ordinary lunar substance, some remain unconvinced and are eager to see what the Chinese Space Agency will further reveal.

Update July 2020: this article offers new clues about the odd material found on the far side of the Moon.