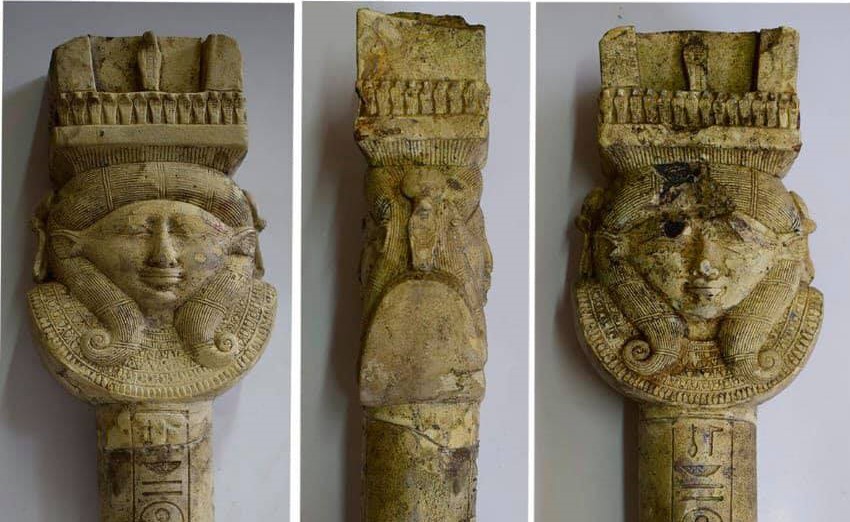 Archaeologists made new significant discoveries about the cultural and spiritual life of one of the oldest cities in the Nile Valley - Buto.

During excavations in northern Egypt, at the site of the ancient city of Buto, archaeologists have discovered objects associated with the cult of the goddess Hathor – faience incense burners, a fragment of a limestone column depicting the goddess, a golden udjat symbol (“Eye of Horus”) and other artifacts. The finds were made on the territory of a temple dating back to the reign of the XXVI dynasty (VII-VI centuries BC).

Buto, which the Egyptians called Per-Wadjet, was one of the oldest cities in the Nile Valley. It arose in the western part of the Delta in the pre-dynastic era and, before the unification of the country at the turn of the 4th-3rd millennia BC, apparently dominated the lands of Lower Egypt. The ruins of the city are located in the province of Kafr el-Sheikh, in the Tell el-Farain hills, 95 kilometers east of modern Alexandria.

Buto was the center of worship for Wadjet, the patron goddess of royal power. The Wadjet symbol – a standing cobra – along with the vulture, personifying the Upper Egyptian goddess Nekhbet, became an attribute of the headdress of the kings of the united state and was used in this capacity for three millennia.

Despite the loss of political significance during the dynastic era, the city retained its religious role. For example, in the 15th century BC, Thutmose III, famous for his conquests in Asia, left a memorial stele in the local Ouadjit temple, which lists the gifts he brought to the sanctuary. Two centuries later, Ramses II put his statues in the temple, one of which depicts him next to the goddess.

Period of prosperity in the ancient Egyptian city of Buto

In the 1st millennium BC, there was a period of prosperity for the city of Buto. Archaeological research also shows that the city experienced a significant upsurge in temple building during this era. So, in 2018, archaeologists reported the discovery of the remains of a sanctuary built during the reign of the XXVI dynasty. Fragments of a monument belonging to its founder, Pharaoh Psamtik I (reigned in 664-610 BC) were found in the temple.

This ruler, who came to power after a difficult period of rule by the Nubian dynasty and the conquest of Egypt by the Assyrians, placed his capital in the ancient city of Sais, not far from Buto. In an effort to restore the country’s former greatness and strengthen its position, he stimulated the conversion of the Egyptians to the spiritual heritage, supported temples in the nearby old religious centers, and built new sanctuaries.

Restoring  the spiritual culture in the city of Buto

Such a policy of restoring spiritual culture, which fell into decay after the crisis of the Third Transitional Period, when the New Kingdom collapsed and weakened Egypt lost its independence, was reflected in the story of Herodotus about how Psamtik I addressed the oracle in Buto.

Confirmation that Psamtik I and his successors paid great attention to the city of Per-Wadjet was the find of Egyptian archaeologists led by Hossam Ghoneim, made on the territory of the temple complex in Buto. Scientists have found in its southern part numerous ritual objects related to the cult of the goddess Hathor – the patroness of fun, love, fertility, and motherhood, the wife of the god Horus.

A column with the image of Hathor

Among the finds are ceramic bowls, earthenware incense burners (one of which retains the image of the god Horus), and the fragment of a limestone column. On such columns, a relief image of Hathor was carved in the form of a woman’s face full face, with cow ears, since the cow was a sacred animal of the goddess, and in a wig with characteristic curls.

Figurines of deities and amulets

The collection of finds also includes figurines of deities – the patroness of pregnant women and women in labor, Taurt, and the god of wisdom and sacred knowledge, Thoth. They also found a golden royal amulet with the udjat symbol or the “Eye of Horus”. According to the Egyptian mythological tradition, it symbolized the eye lost by the god in the fight with Seth.

In addition to the golden “eye of Horus”, archaeologists have discovered traces of gilding in the form of scales during excavations. This suggests that some cult objects were covered with a layer of gold, symbolizing incorruptibility.

The head of the Egyptian Antiquities Sector of the Ministry, Dr. Aymen Ashmawy, spoke about other finds made during the excavation of the ancient Egyptian city. These are various ivory objects depicting scenes of offering gifts, daily activities, plant and animal motifs.

Of particular importance are hieroglyphic inscriptions, according to which scientists were able to establish which rulers paid attention to the temple. These are Psamtik I (the inscriptions contain his full title, which included five names) and Ahmose II, or Amasis (567- 526 BC).

In addition to cult objects, archaeologists have discovered a reservoir for sacred water lined with polished limestone in Buto. The remains of another building made of raw bricks dating back to the Hellenistic period (late 4th – 1st centuries BC) have also been unearthed. It included a pool and a system of heating, supply, and drainage of water and was apparently intended for ritual ablutions.