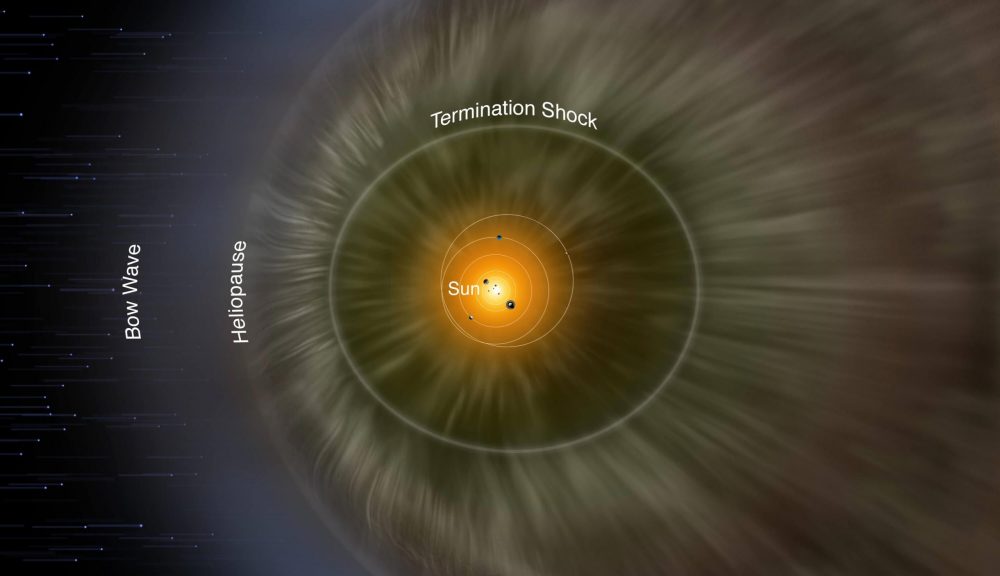 This is the first almost complete mapping of the heliopause.

Based on data from the IBEX spacecraft, astrophysicists were able to create a three-dimensional map of the outer boundary of the heliosphere. They used what could be called space echolocation: the probe has been capturing high-energy neutral atoms reflected from this region of space back into the solar system for ten years.

As described by the work of lead author Dan Reisenfeld, the IBEX behaved like a bat in the cave. Only the solar wind was used instead of sonar or the voice of an animal.

During the whole cycle of the Sun’s activity (from 2009 to 2019), the apparatus measured a stream of particles sweeping past it towards interstellar space. And at the same time, he tried to catch the atoms returning back.

Far beyond the orbit of Neptune (about 60 astronomical units, or nine billion kilometers), the solar wind collides with interstellar plasma. This interaction not only slows down the particles emitted by the Sun but also generates a steady stream of high-energy neutral atoms (ENA).

It is rather weak, but perceptible and, most importantly, has a strictly unique nature – anywhere, except for the heliospheric mantle, ENA with the desired characteristics cannot arise.

The path of the solar wind from the star to the heliospheric mantle takes from two to six years. By carefully measuring the activity of the Sun and the ENA flux, the scientists compared these two oppositely directed particle fluxes.

As a result, it was possible for the first time to draw up a three-dimensional map of the boundary of the heliosphere – knowing the speed of movement of matter and the time it took for it to travel the entire path, it is easy to measure the distance traveled.

The resolution of the method invented by American astrophysicists is not amazing yet. In the direction opposite to the motion of the interstellar plasma, the boundary of the heliosphere was determined at a distance of 120 astronomical units from the Sun.

But from the opposite side of the solar system, where the heliosphere is pulled out by the “tail”, the boundary has not been calculated. The map shows that it extends over 350 astronomical units, but that is the limit of the IBEX space sonar. It will be possible to refine the map only by further observations.

Our home star – the Sun – throws not only an incredible amount of photons of different energies but also about a million tons of matter. These are mainly electrons, protons (hydrogen nuclei), and alpha particles (helium nuclei).

Collectively, they are called solar wind. On Earth, we can indirectly observe its interaction with the atmosphere when we see the auroras.

But in space, this stream of particles can travel a long way before hitting an obstacle. Most often, the solar wind meets interstellar plasma on its way. This happens about 75 to 90 astronomical units from our star – the region is called the termination shock.

There, protons, alpha particles, and electrons emitted by the Sun slow down from 400 kilometers per second to less than 100: the movement of the solar wind becomes subsonic.

The speed of sound is a strict physical concept that characterizes the speed of propagation of elastic waves, and it can also be calculated for outer space. Due to the relative abundance of matter ejected by the Sun within the heliosphere, the average speed of sound is about 100 kilometers per second. The exact value depends on the activity of the star.

When matter drastically reduces its speed from supersonic, many interesting processes take place. In the case of the heliosphere, the heliospheric mantle is located beyond the boundary of the Termination shock (starts at 80-100 astronomical units from the Sun).

There, the plasma is compressed, its turbulent motion begins, and the very ENA appear – electrons that have lost some of their energy join the nuclei of hydrogen or helium.

But the heliosphere does not end there, its outer boundary is the heliopause. There, the speed of particles emitted by the Sun is finally compared with the interstellar plasma, and they are mixed.

The latter represents the same solar wind, only emitted by other stars. It was she who was found by astrophysicists using the IBEX probe – in the heliopause, the ENA flux again falls. Scientists were able to do this for the first time, although not from all sides of the Sun.

To understand the formation and evolution of planetary systems, it is extremely important for scientists to study the heliosphere. It is she who protects us from most of the galactic rays. Probably, it was precisely due to the presence of the heliosphere that, in principle, the existence of developed life on Earth became possible. 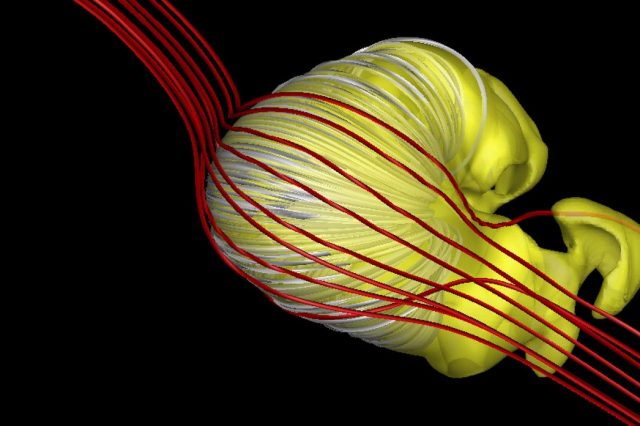