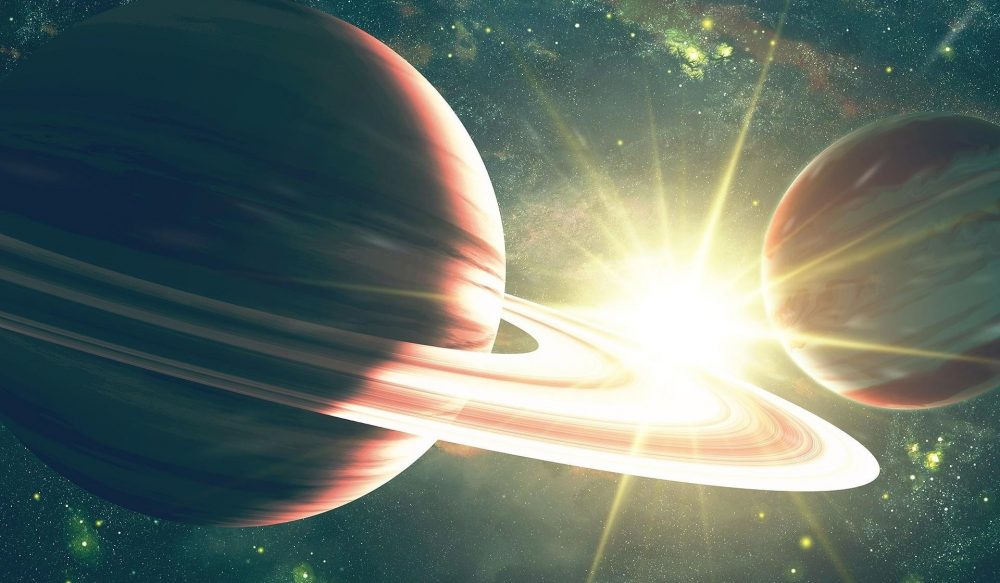 One of the rarest astronomical events we will witness during our lifetimes.

What will the end of 2020 be without another major event? This special occasion is reserved for the Great Conjunction of Jupiter and Saturn which hasn’t occurred since the Middle Ages or more specifically – 1226.

Of course, Great Conjunctions occur regularly when the two planets align once in about 20 years but they haven’t been this close for nearly 800 years. At the winter solstice, December 21, the two largest planets in the solar system will be visible “on” each other in the western sky.

From ancient times to the present day, the Great Conjunctions have attracted considerable attention as celestial omens. Indeed, as early as the Middle Ages, astrologers paid special attention to the 20-year cycle of Jupiter and Saturn, calling these planets “rulers of the times”.

The Great Conjunctions were a subject considered by most astronomers until the time of Tycho de Brahe and Kepler, starting with scholastic thinkers such as Roger Bacon or Pierre d’Ailly, and moving on to literary giants such as Dante and Shakespeare. Interest in the Great Conjunctions in Europe dates back to Arab sources, most notably the book on Abu Ma’shar’s conjugations (787-886).

In what astronomers call the “Great Conjunction,” or the meeting of Jupiter and Saturn, the planets will look perfectly aligned from Earth’s point of view and will be only 0.1 degrees apart (that’s just one-fifth of the diameter of the Moon). Jupiter and Saturn last appeared about this close in 1623, just 14 years after Galileo made his first telescope and discovered Jupiter’s moons.

The German astronomer Johannes Kepler suggested in 1614 that the closeness between Jupiter and Saturn observed in 7 BC may be what the three wise men in the “Nativity” called the Star of Bethlehem. Whether the famous “Christmas Star” was a real astronomical event, such as a planetary connection or a comet, remains a mystery.

How Can You Observe The Closest Alignment Since 1226?

Jupiter is five times farther from Earth than Earth is from the Sun – a whopping 774 million km. Saturn is almost twice as far away.

Your birthday on Jupiter will happen once every 12 Earth years and once every 30 years on Saturn. At this speed, Jupiter aligns with Saturn every 20 years in the orbital plane of the solar system, creating a connection seen from Earth. But these connections don’t always seem as close as they did this year.

The real alignment of these two gas giants from the solar system happened a few weeks ago, but from the point of view of the Earth, as it orbits the Sun rapidly, the Great Conjunction will occur in the next three weeks.

It can already be seen that the planets are close to each other and set later in the night, so you will have ample opportunity to track the progress of their convergence.

But don’t wait too long, because the planets will sink below the horizon soon. No such connection will be seen again until March 15, 2080, which is a long time to wait, right?

In the northern hemisphere, this planetary connection can be observed in the southwestern sky shortly after midnight. If you’ve been waiting to pull out your telescope, this may be the perfect option. Even if you have an amateur telescope, you can see the Galilean moons, the bands of Jupiter, and the rings of Saturn, all in an amazing view.

Anyhow, the Great Conjunction will be visible from the entire world but specialists say that people around the equator will have the greatest view.

• Lewis, S. (2020, December 03). Jupiter and Saturn will come within 0.1 degrees of each other, forming the first visible “double planet” in 800 years. Retrieved December 04, 2020, from https://www.cbsnews.com/news/jupiter-saturn-great-conjunction-double-planet-december-21/?ftag=CNM-00-10aab6a

• A magnified view of Jupiter and Saturn at conjunction. (n.d.). Retrieved December 04, 2020, from https://earthsky.org/astronomy-essentials/jupiter-saturn-conjunction-telescopic-magnified-dec-2020