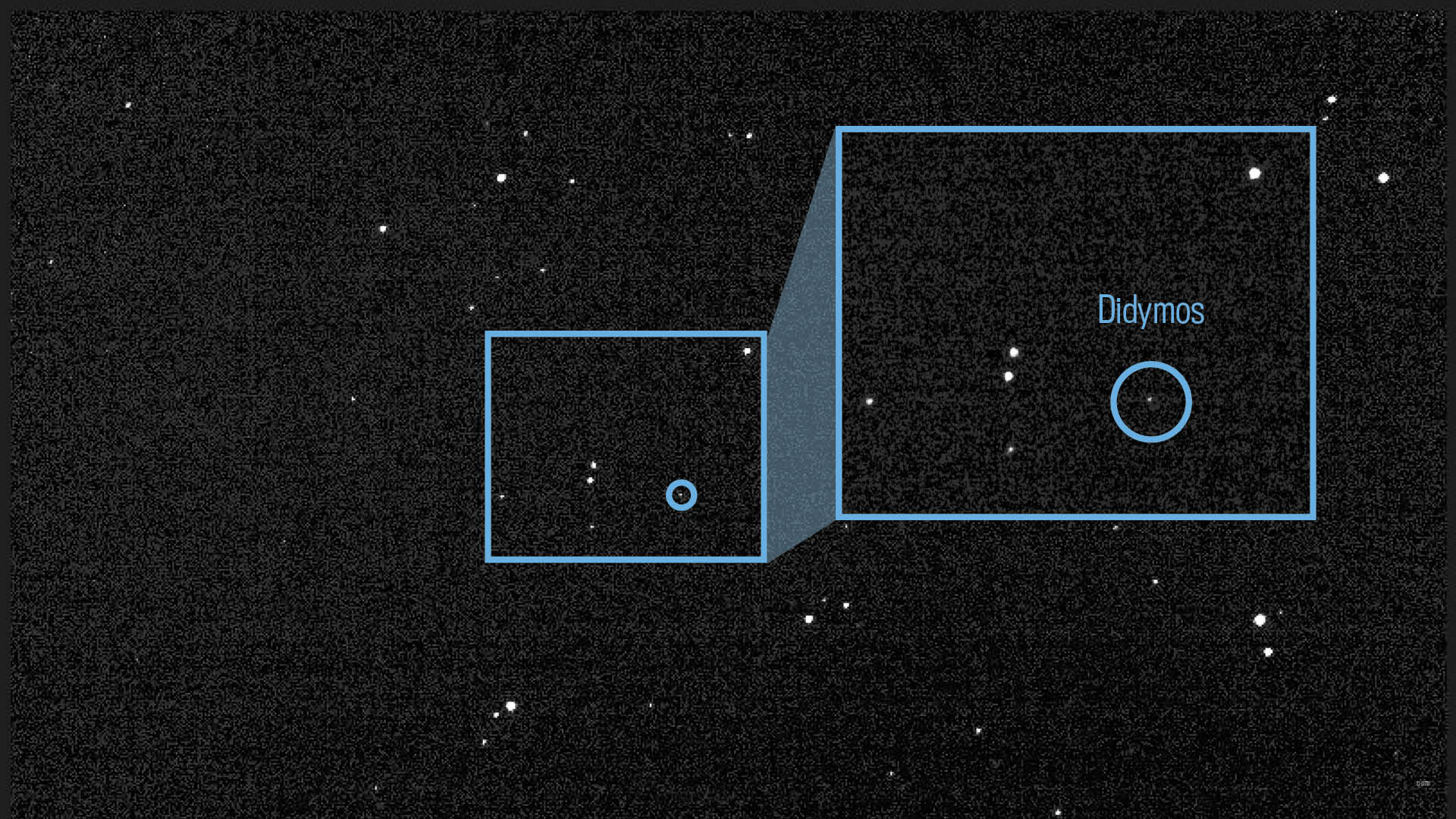 NASA's Double Asteroid Redirection Test (DART) spacecraft has spotted the asteroid it will impact against in space. This is the first time a spacecraft will be used to deflect an asteroid for planetary defense.

NASA’s Double Asteroid Redirection Test (DART) spacecraft sees Didymos in the distance, one of the double asteroid systems that include its target, Dimorphos. Didymos’ small moon Dimorphos will be intentionally crashed into by DART on September 26.

In spite of the fact that the asteroid is not a threat to Earth, this is the first time a spacecraft will be used to deflect an asteroid for planetary defense.

In this photograph, we see a clear reflection of light off the asteroid Didymos and its moonlet Dimorphos in orbit. The image was created by combining 243 images taken by the Didymos Reconnaissance and Asteroid Camera for Optical Navigation (DRACO) on July 27, 2022.

At this distance, around 20 million miles from DART, Didymos is still very faint, and navigation camera experts weren’t sure whether DRACO would find the asteroid. In order to reveal Didymos, the team combined the 243 images captured by DRACO and enhanced them, therefore revealing a faint light from the asteroid system in the faraway distance.

According to Elena Adams, a mission systems engineer with Johns Hopkins Applied Physics Laboratory (APL) in Laurel, Maryland, these first images are being used to demonstrate imaging techniques. Despite the fact that the image quality is similar to what we can get from ground-based telescopes, scientists need to make sure that DRACO is working correctly and can see its target before they can begin guiding the spacecraft into the asteroid autonomously using the images.

As a result of using non-DRACO images of Didymos, DART has already conducted a number of navigation simulations, but the spacecraft’s navigation will ultimately be guided toward the asteroid, especially during the last four hours before impact, by seeing and processing images of Didymos and Dimorphos. Then, DART must self-navigate without human intervention to impact Dimorphos successfully.

We can adjust the DRACO settings and fine-tune the software based on seeing the first DRACO images of Didymos,” said Julie Bellerose, the DART navigation lead at NASA’s Jet Propulsion Laboratory in Pasadena. As scientists get a better understanding of Didymos’ location in September, they will refine DART’s aims.

Over the next three weeks, the DART team will execute three trajectory correction maneuvers based on observations taken every five hours, which will further reduce the spacecraft’s margin of error towards impact. In approximately 24 hours prior to impact, the navigation team will know the exact position of the target Dimorphos after the final maneuver on Sept. 25. After that, DART will be responsible for guiding itself autonomously to its collision with the asteroid moonlet.

On August 12, August 13, and August 22, DRACO observed Didymos as planned.

The DART mission is the world’s first planetary defense test, aiming to slightly alter Dimorphos’ motion in space through a kinetic impact. In spite of the fact that the asteroid does not pose a threat to Earth, the DART mission is intended to demonstrate that a spacecraft can navigate autonomously to make a kinetic impact on a relatively small asteroid, which is a viable method of deflecting asteroid collisions with Earth if one is ever discovered. It is expected that DART will reach its target on September 26, 2022.