The Dead Sea Scrolls also referred to as the Scrolls of Qumran, named after having been found in caves located in Qumran on the shores of the Dead Sea, are a collection of 972 manuscripts. Most of the ancient scrolls date back to between 250 BC to 60 AD. The manuscripts are written in Hebrew and Aramaic almost entirely, with only a few copies in Greek. The first seven manuscripts were accidentally discovered by Bedouin shepherds in late 1946, in a cave near the ruins of Qumran, on the north-western shore of the Dead Sea. Later, until 1956, manuscripts were found in a total of eleven caves in the same region.

Some of the manuscripts constitute the oldest testimony of the biblical text found to date. Approximately two hundred copies, most highly fragmented, of all the books of the Hebrew Bible have been discovered in Qumran, with the exception of the Book of Esther. A complete copy has been found from the Book of Isaiah.

The Dead Sea Scrolls are an essential piece in the history of religion and help us understand how much religion and beliefs influenced society.

The dead sea scrolls have been studied for decades, and great effort has been made by experts to preserve the ancient scrolls, as well as to better analyze them with state-of-the-art technologies, which help experts see things that would have otherwise gone unnoticed.

This is precisely what a new study by experts from the University of Manchester reveals. The experts have discovered that as many as four dead sea scroll manuscript fragments that were safeguarded at the John Rylands Library, and which were previously thought to have been empty actually have text on them.

The new study, part of the Leverhulme-funded study has raised hope that many other Dead Sea Scroll fragments could bear previously unseen inscriptions on them.

That is, until now.

The fragments were examined by  Professor Joan Taylor (King’s College London), Professor Marcello Fidanzio (Faculty of Theology of Lugano), and Dr. Dennis Mizzi (University of Malta). Closer inspection of the fragments revealed the possibility that one of the scrolls contacted a barely visible letter. Professor Taylor, therefore, set out to photograph the existing fragments that appeared contentless with the help of multispectral imaging.

“Looking at one of the fragments with a magnifying glass, I thought I saw a small, faded letter – a lamed, the Hebrew letter ‘L‘,” explained Professor Taylor. “Frankly, since all these fragments were supposed to be blank and had even been cut into for leather studies, I also thought I might be imagining things. But then it seemed maybe other fragments could have very faded letters too.”

The process involved photographing 51 fragments from front to back, and six were eventually identified as noteworthy for further studies. Experts eventually established that four of these contained readable Hebrew/Aramaic text written in carbon-based ink.

Of the four fragments, one features four lines of text with as many as sixteen letters, many of which are at least partially preserved, but the word Shabbat clear stands out. It is believed that the fragment is related to the Book of Ezekiel.

“With new techniques for revealing ancient texts now available, I felt we had to know if these letters could be exposed. There are only a few on each fragment, but they are like missing pieces of a jigsaw puzzle you find under a sofa,” explained Professor Taylor.

The exact origin of the Dead Sea Scroll remains a highly debated subject among experts, but the dominant theory proposes that the scrolls that were discovered to date were created by a sect of Jews that lived not far from the Qumran Caves. 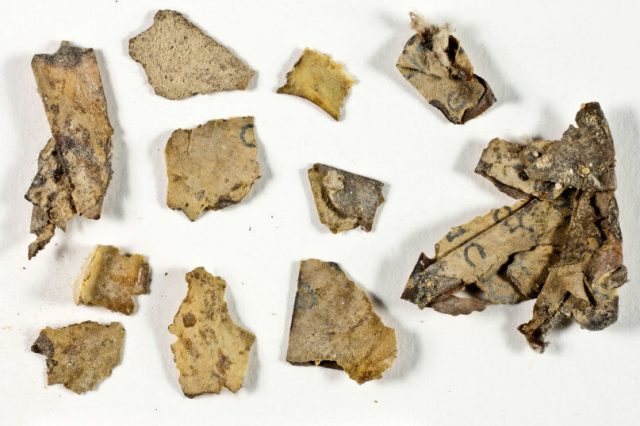