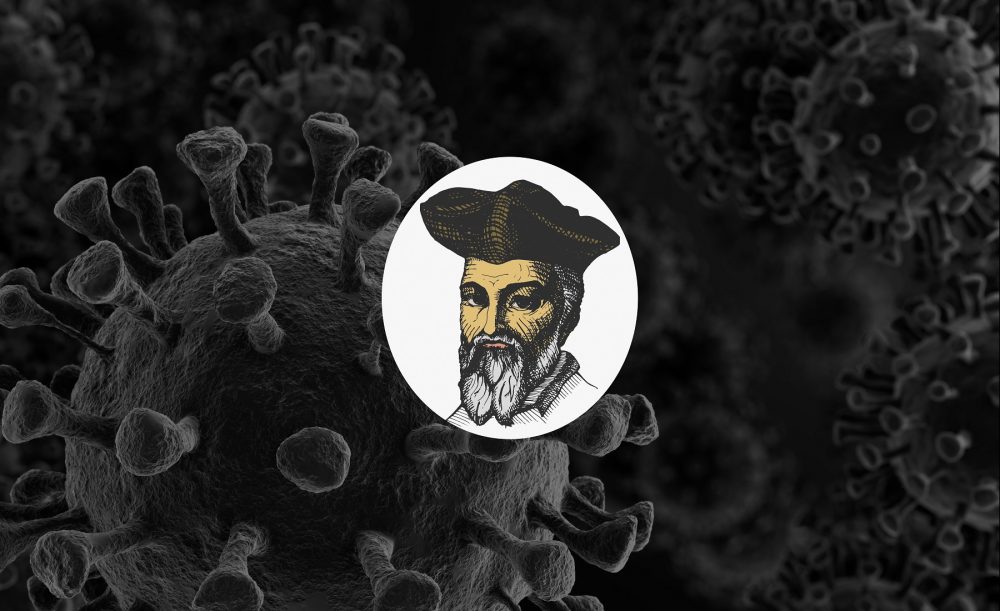 It has now been claimed that Nostradamus may have predicted the Coronavirus outbreak in China hundreds of years ago.

Michel de Nostredame is a French apothecary, writer, astrologer, and seer believed to have predicted countless historical evens hundreds of years before they actually happened. He is credited with predicting events such as the Apollo Moon Landing, the bombing of Hiroshima and Nagasaki, among other things. Now, it has been claimed that Nostradamus successfully predicted the outbreak of the terrifying Coronavirus.

The coronavirus epidemic, a new virus that can be transmitted between humans has already claimed the lives of more than 560 victims around the world, and infected more than 24,000 people from Asia, to the Americas.

It was first detected in the Chinese city of Wuhan, Hubei Province, and from there it spread to no less than 27 countries, causing health experts to issue a global warning due to its fast spreading.

According to reports from the World Health Organization, as of February 5, 2020, the new coronavirus, also called 2019-nCoV, has infected 24,554 people around the globe:

Outside of China are 191 confirmed cases of the coronavirus (32 new). It has spread to 24 countries around the globe, (1 new) and killed 1 person outside of China. WHO’s risk assessment suggests China as a region where the risk of being infected with the coronavirus is very high, while on a regional and global level the risk is high.

The basic principles to reduce the general risk of transmission can be found here, and include avoiding contact with people who seem to suggest from acute respiratory infections. Washing hands frequently, especially after being in contact with people that are ill, or their environment.

To date, as of February 5, 2020, there is no specific medicine prescribed to prevent or treat the new coronavirus (2019-nCoV). A vaccine is currently being developed, but an estimate as to when it will become available, and if it will, remains an enigma no one seems to have an answer to.

The new virus is not to be played with. 2019-nCoV poses a direct threat to global health. Evidence of that is the fact that China’s Hubei province of 60 million people, where the outbreak is concentrated, is currently home to the modern world’s largest-ever quarantine.

China’s leader, Xi Jinping, said that China is in a “critical moment” of its fight against the coronavirus epidemic.

Nostradamus and the Coronavirus

While the world tries to cope with yet another global health pandemic, it has been revealed that hundreds of years ago, a man considered the greatest seer who has ever lived—Nostradamus—is said to have predicted the outbreak of the coronavirus.

In 1555, Nostradamus published his first book—Les Prophéties—where he presented his alleged predictions of the future. It has rarely been out of print since his death.

The first installment of his long-term predictions of the future contained 353 quatrains. The third edition of the book was published with a novel 300 quatrains and was printed in 1558. These predictions now survive only as part of the omnibus edition that was published in 1568.

This version features one hundred unrhymed and 941 rhymed quatrains, that were intricately grouped by the French seer into nine sets of 100 and one of 42, called “Centuries”.

However, in addition to Nostradamus’ book Les Prophéties, the Almanacs are by far his most popular work. These were published on a yearly basis starting from 1555 until his death. Nostradamus was accustomed to publishing two or three per year.

The alleged prophecies written by Nostradamus have been heavily criticized by skeptics, who have claimed that his work does not predict anything and that his prophecies are no more than mistranslations and wrongly interpreted sentences which have been fittingly and accordingly adjusted to fit a specific historical event.

You can check out the quatrains penned down by Nostradamus, translated to English by visiting this Wikisource link.

Nonetheless, millions of people around the globe are firmly convinced that the French prophet had the ability to foresee the future and as evidence point to the following quatrains:

From the depths of the West of Europe, A young child will be born of poor people, He who by his tongue will seduce a great troop; His fame will increase towards the realm of the East.

Beasts ferocious with hunger will cross the rivers, The greater part of the battlefield will be against Hister. Into a cage of iron will the great one be drawn, When the child of Germany observes nothing.

The two quatrains above seem to make reference to Adolf Hitler, born on April 20, 1889, in Austria, a country in Western Europe. Hitler rose to power in large thanks to his oratory abilities and started World War II after ordering Poland to be invaded.

He is also thought to have predicted the terrifying bombings of Hiroshima and Nagasaki:

Now, with all the terrifying news about the new coronavirus outbreak, some people have suggested that Nostradamus predicted the outbreak of the Coronavirus (2019-nCoV) hundreds of years ago.

As evidence that Nostradamus predicted the outbreak of the Coronavirus, the following quatrain has been presented: Century II:53.

Nostradamus wrote: “The great plague of the maritime city Will not cease until there be avenged the death Of the just blood, condemned for a price without crime, Of the great lady unwronged by pretense.”

Those who have studied Nostradamus’ quatrains suggest that he actually managed to predict the outbreak. Although the French seer mentions a maritime city, and Wuhan, where the Coronavirus broke out, is not anywhere near the ocean, the market where the Coronavirus is said to have started is one of the most popular seafood markets in the region.

Although nothing else in the quatrain points to Wuhan, China, or the novel coronavirus for that matter, many people are convinced that Nostradamus’ reference to the “great plague” and the “maritime city” is actually linked to Wuhan and the new coronavirus.

Realistically, the curious sentences have been misinterpreted and fitted accordingly to match the timeline of the outbreak, like many other of his alleged predictions. Nonetheless, Nostradamus continues to arouse people’s imagination with his work.