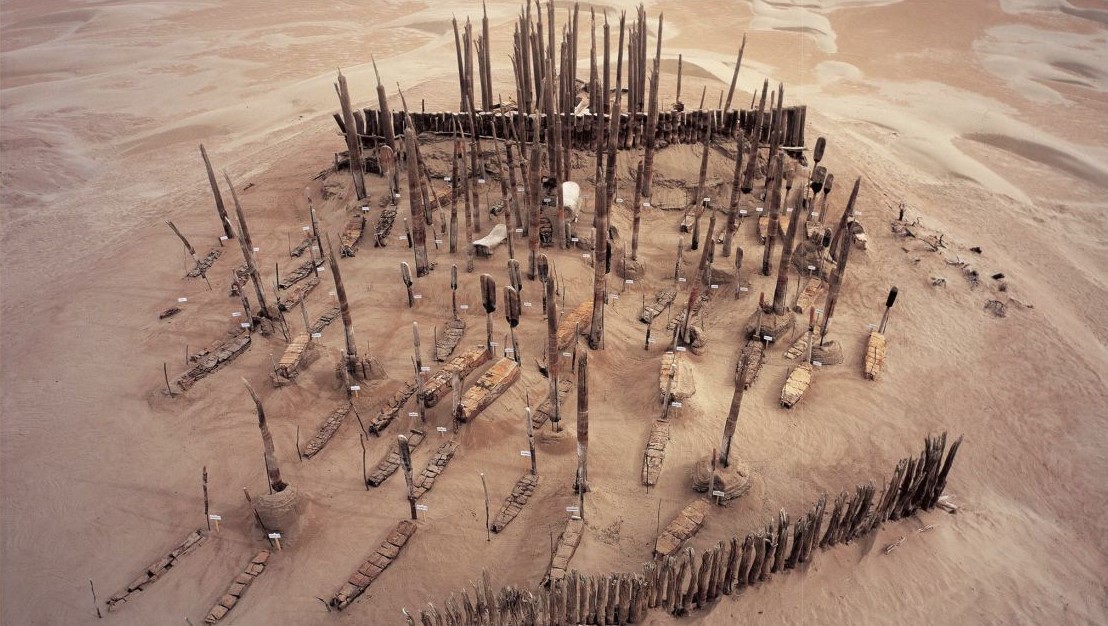 Nearly 70 years after the Tarim mummies were discovered, scientists came out with the results of a large-scale DNA research that established the origins of the mysterious ancient population.

Paleogenetics investigated 18 ancient genomes of the inhabitants of Xinjiang (about 3000-1700 BC) and found out the origin of the Tarim mummies.

It turns out that the Tarim population were descendants of the Ancient North Eurasians. Populations genetically related to Tarim lived in Afontova Gora in the Upper Paleolithic era, and in the Bronze Age – in the vicinity of Lake Baikal.

The original discovery of the Tarim mummies

Swedish archaeologists discovered well-preserved ancient Caucasian mummies in Xinjiang in 1934, which were named Tarim after the arid depression. Until the end of the 20th century, the burial grounds associated with this population were practically not studied.

Excavations in the 1990s – 2000s revealed numerous remains of people who lived around 2100–200 BC, whose bodies were naturally mummified. Only in the Xiaohe burial ground, did archaeologists find 350 burials, 190 of which were looted or destroyed.

Characteristics of the Tarim population

The Tarim population was engaged in a productive economy, raising cattle and small ruminants and cultivating some crops, for example, wheat or barley, despite the very limited territories for this. The preservation of organic materials made it possible to find out that the Tarim people knew how to make dyed woolen fabrics, made cheeses, and used them, including in a funeral rite, which was distinguished by sufficient originality. Thus, the dead, as a rule, were buried in coffins in the form of wooden boats, and the funerary implements often included intoxicating substances and wooden phalluses.

Hypotheses about their origin

There are two main hypotheses where the Tarim population came from to Xinjiang about 4000 years ago. The main assumption was that these are the descendants of the cattle-breeding tribes of the Eurasian steppes belonging to the Afanasievo or later Andronovo culture.

According to another version, these were migrants from Central Asia associated with the Bactrian-Margian archaeological complex. The first studies of ancient mitochondrial DNA did not bring significant clarity, and in 2019 scientists from France and Russia came to the conclusion that the Afanasievans were not associated with the Tarim population.

Fan Zhang from Jilin University, together with scientists from Germany, China, the United States, and South Korea, conducted a study of the ancient DNA of five people who lived around 3000-2800 BC in the Dzungar depression, and 13 people who lived around 2100-1700 years BC in the Tarim Basin. In total, paleogeneticists succeeded in sequencing complete genomes in 18 out of 33 cases. In addition, ten new radiocarbon datings were obtained using accelerator mass spectrometry.

It turned out that the oldest population of Xinjiang forms several separate clusters. The Dzungarian individuals from the Ayituohan and Songshugou sites located near Gorny Altai turned out to be genetically close to the Afanasyevites, and the samples from the Nileke site differed from them by a slightly greater similarity with the Tarim population.

Origin of the Tarim mummies from Xiaohe and Gumugou

Scientists noted that there is a close relationship between the Dzungarian and Tarim populations. However, the former received a significant genetic contribution from the West Eurasian population, and the latter was closer to individuals who lived, for example, in the area of ​​modern Krasnoyarsk during the last glacial maximum (about 17 thousand years ago). The model of the genetic pedigree of the Dzungarian population turned out to be the following: 50–70 percent – Afanasevan, 19–36 percent – Tarim people, 9–21 percent – the Baikal population of the Early Bronze Age.

Conclusions based on results

The results of the study showed that the Tarim formed a homogeneous population, despite the fact that the monuments are separated from each other by 600 kilometers of desert terrain. The model of the genetic pedigree of the Tarim people is as follows: 72 percent are residents of Mount Afontova in the Upper Paleolithic and 28 percent are residents of the Baikal from the Early Bronze Age. The genetic profile of the Tarim population, according to researchers, was formed 183 generations ago, that is, about 9157 ± 986 years ago, if the average generation length was 29 years.

The researchers also analyzed the tartar proteomes of seven Tarim mummies found in the Xiaohe burial ground. In all seven individuals, scientists found proteins specific to ruminant milk, related to cattle, sheep, and goats. This confirmed that the pastoralist way of life has been characteristic of the local population since its inception in the region. It is noteworthy that none of the individuals possessed lactase persistence.