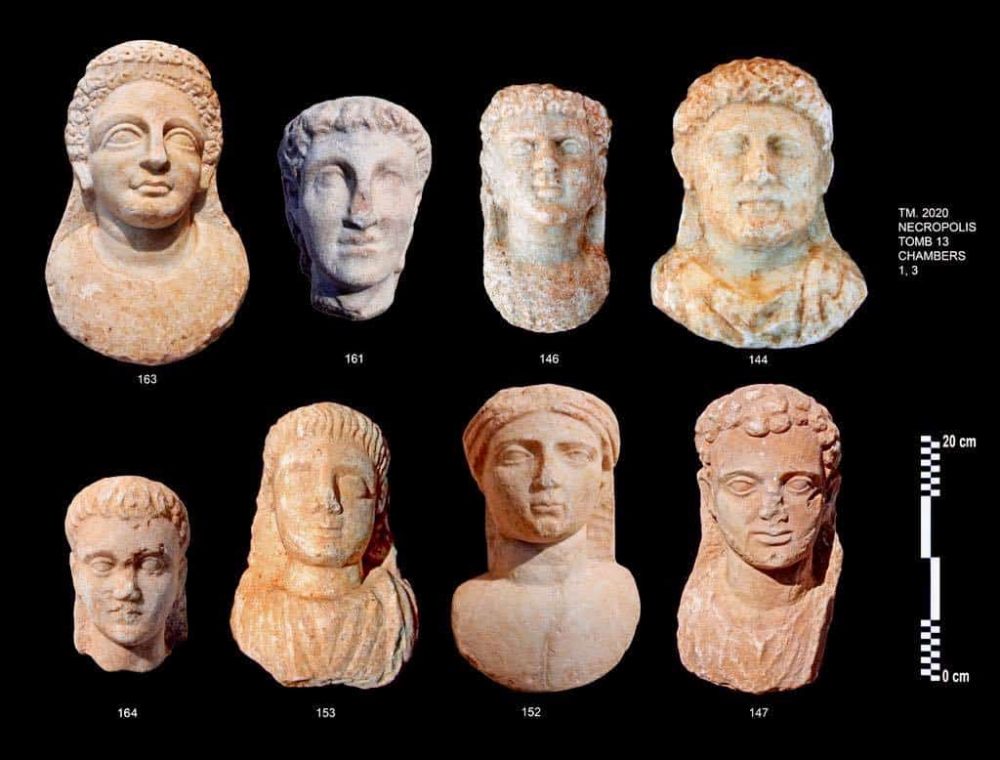 A joint Egyptian-Dominican archaeological mission, including experts from the University of Santo Domingo, discovered mysterious tombs with mummies in the Taposiris Magna Temple near Alexandria (Egypt). The archaeologists discovered 16 tombs with mummies in a burial shaft carved into the rock. Judging by the arrangement of the burial chambers, the burials have been dated back to the Greco-Roman era.

Burial catacombs like the newly discovered ones were common during the ancient Greco-Roman era. They were usually carved inside a mountain or natural rock formation.

The archaeological team discovered several mummies inside the tombs. Although the remains have since deteriorated, the stone burial masks are still intact. This allowed the team of scientists to see what each person once looked like.

According to experts, the recovered remains are in poor condition, which shows the difference between the approach to mummification in the ancient Egyptians and in the later era of the Greeks and Romans.

The mummies must have once been wrapped in gilded material since experts found traces of gold. Among the curious discoveries, a mummy was found with a well-preserved tongue-shaped gold foil amulet that was placed in its mouth.

Scientists speculate that in the process of embalming the deceased, the tongue was removed and replaced with a golden amulet so that the person could speak with Osiris in the afterlife. The very name of the temple in translation from ancient Egyptian means “The Great Tomb of Osiris”.

In one of the burials where the mummy was found, they found the remains of scrolls and parts of the sarcophagi. In addition, there were also fragments of gilded decorations depicting the ancient Egyptian god Osiris.

Another mummy was found with a crown decorated with horns and a cobra snake on its forehead. On the chest of the mummy, there was a gilded decoration in the form of a wide necklace with the head of a falcon, a symbol of the ancient god Horus.

The researchers also found several statues. Unlike the mummies, all marble portraits they discovered were well preserved. Most of the figures depicted the deceased who were buried in the necropolis in a formal way without smiles on their faces.

If you are wondering about the meaning behind the facial expression, I mentioned it because archaeologists also unearthed a unique funerary mask with eyeholes and an obvious smile which is the only artifact with a distinguishable facial expression. You can see the entire piece from the head to the chest in the picture above. Experts actually consider this the most significant find since it is extremely rare and it is a wonder how it remained in one piece.

The legacy of the Ptolemies

Earlier, a team of researchers found several coins in the temple of Taposiris Magna, which were engraved with the face of Queen Cleopatra, which suggests that she was the queen during the period when people were buried in these stone tombs. There are speculations that the temple was the final resting ground of Cleopatra but no evidence has been found to this day.

In addition, fragments of statues and temple grounds show that it was King Ptolemy IV who built this impressive temple. The Ptolemaic dynasty began to rule in Egypt after the collapse of the power of Alexander the Great in 305 BC.

Undoubtedly, archaeologists have many years of work ahead until all the secrets of the site are unearthed. This time, archaeologists discovered mummies and statues. Who knows what they could find during the next expedition?