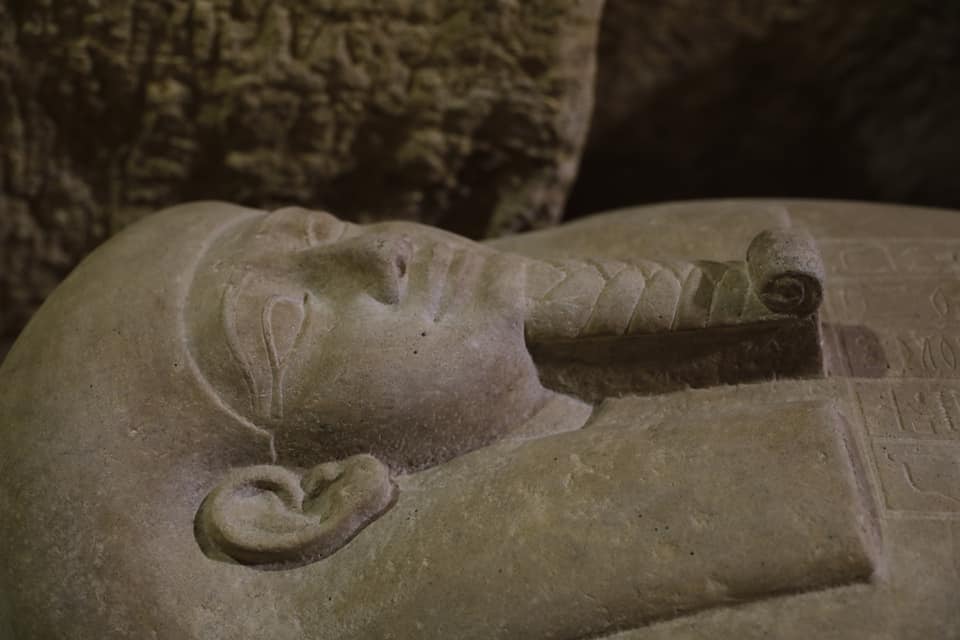 3,000 Year old tomb with a sarcophagus dedicated to the ancient Egyptian sky god excavated by archaeologists.

Egypt, the land of Pharaohs, pyramids, and mummies continues to surprise us with its rich history.

In a recent discovery, Egypt’s ministry of antiquity has revealed that a group of archeologists has come across the tombs of ancient high priests, as well as the sarcophagus believed to belong to the sky god Horus, at an archaeological site located in Egypt’s Tuna el-Gebel.

Horus was one of the most important deities in ancient Egypt, serving a number of functions most notably god of kingship and the sky.

The archeological mission that made the discovery has reported excavating as many as 6 tombs with 20 sarcophagi. Some of these were engraved with hieroglyphics.

The researchers have reported that the shared tombs are thought to have been dedicated to the high priests of the god Djehuty and senior officials, belonging to the 15th nome, one of the ancient Egyptian territorial division ruled over by a provincial governor.

However, in addition to the tombs the most notorious discovery is that of the stone sarcophagi dedicated to Horus, son of Isis and Osiris. The ancient sarcophagus features illustration of the goddess Nut spreading her wings as a sign of the ancient Egyptian Cosmos.

In addition to the tombs and Horus’ stone sarcophagi, the archaeological mission has reported discovering as many as 10,000 colored ushabti–funerary figurines–, as well as 700 amulets—including some made of pure gold, shaped as scarabs, and one amulet shaped to depict a winged cobra.

The archaeological mission also discovered several painted canopic jars ad out of limestone. These were used by the ancient Egyptians to store the organs of the mummified.

Their goal was to help the deceased pass into the afterlife, which was the ultimate goal. ancient Egyptian mythology tells us that the deceased heart would be weighed against the truth and justice, allowing only the good to transition.

Scarabs were associated with the ancient Egyptian sun god Khepri, as well as the process of daily rebirth.

Ancient Egyptian traditions believed that the sun died at night, and was reborn in the morning in the form of a scarab beetle, which is why it was used as a powerful symbol in the afterlife.

As revealed by the Met Museum, in Ancient Egypt amulets were common and probably inexpensive. The magical powers contained within each amulet were different and were believed to be derived from their shape, inscription, color, and material as well as spoken words made over the amulet.

A New discovery of tombs of high priests of the God Thot, with big coffins and sarcophagi, and thousands of statuettes and amulets, in Tuna El-Gabal in Minya. pic.twitter.com/DM2RBI9UJG

In funerary practices, they were placed among the mummy’s bandages.

Among the amulets discovered by archeologists was one that contained the so-called Eye of Horus. This was believed to be one of the most popular and frequently used amulets in ancient Egypt. The eye–which was a fusion between the eye of a human and that of a falcon–honors Horus, the ancient sky god, whose eye was stolen by Set, the ancient Egyptian god of war, before being restored by Thoth.

The amulet is thought to represent healing and regeneration.