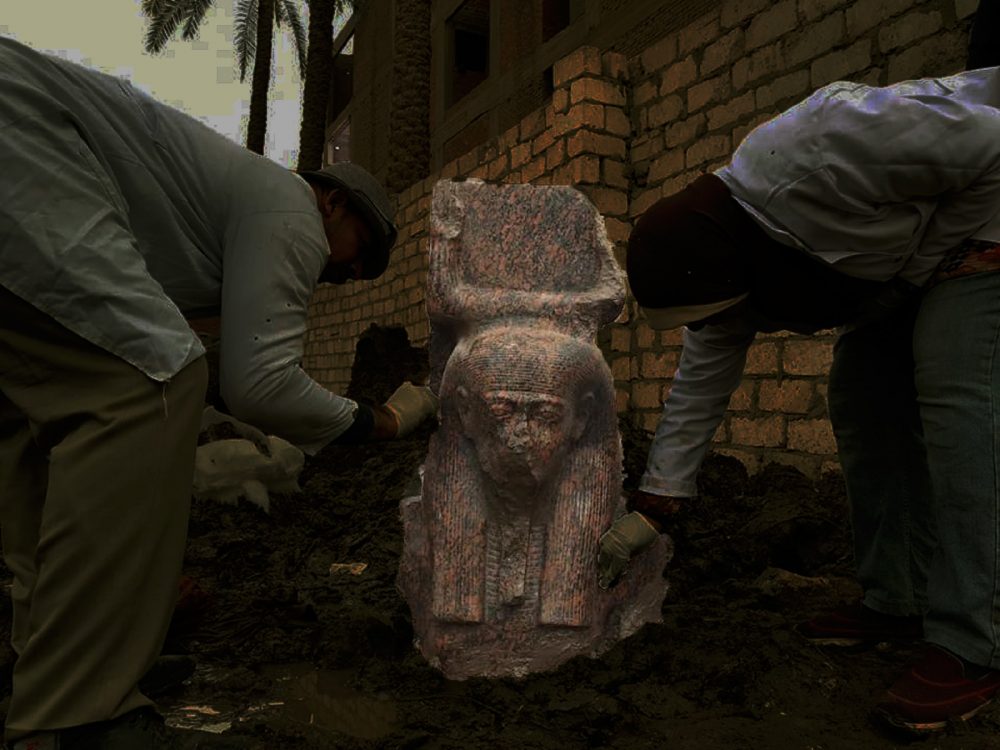 Experts say it is one of the rarest archaeological discoveries ever made.

The excavations were carried out on private property near Mir Rahina,  an area that is home to the remnants of Memphis, ancient Egypt’s Capital located not far from Giza and its majestic pyramids.

Like many other discoveries across Egypt, this too was made by chance. Surveys carried out after local police detained the owner of the land for excavating without the necessary permits eventually resulted in the discovery of the statue.

Eventually, researchers discovered an ancient statue 1.05 meters tall and 55 centimeters wide representing one of the most famous Pharaohs in the history of ancient Egypt, Ramesses II, the third king od the 19th dynasty of ancient Egypt.

The statue is adorned with the Ka symbols which to the ancient Egyptian signified life force and the spirit.

Archeologists have revealed the statue is a unique discovery since only one other similar statue has been discovered in Egypt so far; that of Hor I, king of the XIII dynasty.

In fact, some experts have already pointed out that discovery is one of the rarest finds ever made

“This archaeological discovery is one of the rarest ever made. This is the first granite statue with the symbol of Ka that is recorded,” explained Mustafa Waziri, head of the Supreme Council of Antiquities of Egypt.

Archeologists say that the statue is very well preserved: visible damage can be seen in the area near the mouth and nose of the statue.

The back of the granite bust is covered in ancient hieroglyphs.

In addition to discovering this rare piece depicting Rameses II, the researchers have also revealed a massive collection of huge red granite and limestone blocks that feature difference scenes featuring Ramesses II during the Heb Sed religious ritual, intended to renew the physical strength and supernatural energy of the Pharaoh.

The incredible collection recovered by archeologists may point to a much larger discovery, suggests Egyptian newspaper Ahram. The items could belong to a large ancient Egyptian temple dedicated to the worship of Ptah, the lord of Magic in ancient Egypt.

Ramesses II, also known as Ramesses the Great is often viewed among scholars as the greatest most celebrated and powerful Pharaohs to rule over Egypt during the New Kingdom. He was so famous and important that his successors and later rulers referred to him as the “Great Ancestor”.

During his reign, Egypt undertook a number of military expeditions into the Levant where Egypt reasserted its control over the Canaan. Early in his reign Ramesses II focused on erecting majestic temples, monuments as well as cities. History tells us that he ruled over the land of Pharaohs from 1279 to 1213 BC. His body was not buried inside a pyramid but inside a tomb in the Valley of the Kings. He is seen as one of Egypt’s longest-lived rulers.