Archeologists have reported discovering the submerged ruins of an ancient temple in the sunken city of Heracleion, not far from Alexandria. The city of Heracleion is referred to by many as Egypt’s Atlantis. Discovered in 1999, the ancient city is believed to have sunk some 1,200 years ago.

Since its discovery, the sunken city has given is much to talk about, and numerous discoveries have been made, helping us understand what an important city this was in ancient times. Among the most incredible findings made by underwater archeologist was a ship mentioned by Herodotus, more than 2,400 years ago.

The ship, identified as an ancient Egyptian Baris was thought to have been nothing more than a myth. However, underwater explorers discovered the sunken remains of the vessel, proving that stories written thousands of year ago where not myths but accurate, historical descriptions. 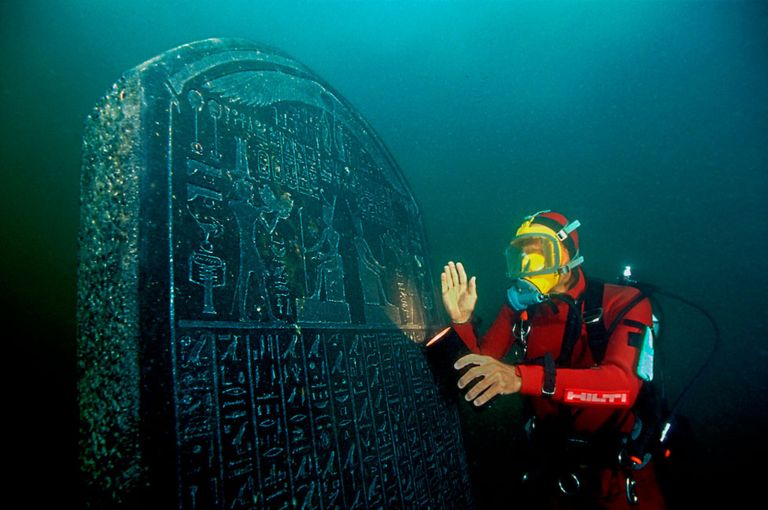 The latest discovery made by Egyptian and European divers is equally stunning. It has now been revealed that the researchers have come across the ancient ruins of a Greek temple, as well as numerous shipwrecks filled with treasure.

Thanks to sophisticated scanning devices, the researchers were able to identify a new part of the city’s main temple, which was completely destroyed as the ancient city was devoured by the sea.

The underwater archeologists found the remnants of a Greek temple, complete with ancient columns as well as pottery fragments that have been dated back to the third and fourth centuries BC. The “completely destroyed” temple was located within the southern canal of the sunken city, as explained by Franck Goddio, head of the Egyptian-European Archaeological Mission of the European Institute of Marine Archeology.

Among the treasures discovered by experts were bronze coins that were traced back to the reign of King Ptolemy II, who ruled over Egypt from 283 BC to 246 BC.

Researchers also discovered numerous previously unknown buildings successfully expanding the limits of the city by nearly half a mile.

As they further explored the city, they discovered more artifacts. Some of them date back to the Ptolemaic Cynasate, and to the time of the Great Byzantine Empire, around 330 CE.

The expedition also analyzed some of the shipwrecks at the site.

Their discovered coins and jewelry dating back to the fourth century BC, inside a now completely excavated vessel.

The ancient city revealed by Franck Goddio more than 12 years ago is home to countless ancient treasures. Among them, the Heracleion is home to the temple where Queen Cleopatra is thought to have been inaugurated.

The numerous artifacts sand buildings discovered beneath the surface all point to the fact that the city was en extremely important trade center in the Mediterranean Sea, before being swallowed by the ocean in what is today the Bay of Aboukir.