An international team of astronomers not only found clouds on the exoplanet, but also measured their parameters with unprecedented accuracy.

Astronomers have accurately determined the position of the opaque cloud layer in the atmosphere of the exoplanet WASP-127b, which belongs to the class of hot Saturns. Scientists managed to identify the upper structure of the atmosphere WASP-127b. This opens the way for the exploration of many other distant worlds.

To see the planet’s clouds, scientists watched as it flies past its star. This made it possible to find out how sunlight passes through the atmosphere because it is changed by its chemical components The results of the work are available on the website of the EPSC-2021 conference.

Astronomers detected clouds on distant exoplanet WASP-127b: Everything you need to know

Over the past few years, significant progress has been observed in the study of exoplanet atmospheres, both in terms of determining their approximate chemical composition and their properties, in particular, the temperature distribution, the presence of winds, clouds, or haze.

At the same time, the objectives of observation are a variety of objects – from Earth-like exoplanets to hot gas giants, and the results of such studies allow scientists to check the models of formation and evolution of exoplanets, as well as assess their potential habitability using biomarkers.

A group of astronomers led by Romain Allart from the University of Montreal published the results of an analysis of observations of the exoplanet WASP-127b in the optical wavelength range.

By combining data from the Hubble Space Telescope and the ESPRESSO spectrograph at the European Southern Observatory in Chile, the researchers were able to study different parts of WASP-127b’s atmosphere. As a result, the scientists saw something they did not expect: they revealed the presence of a substance such as sodium at lower altitudes than anticipated.

The observations were carried out when the planet passed along the disk of its star, while the radiation of the luminary passed through the exoplanet’s atmosphere, carrying in itself information about its properties.

WASP-127b is a hot Saturn type and is in an offset retrograde orbit around a bright, old (about 10 billion years old) star of spectral type G5, located 525 light-years from the Sun.

A year on the planet

A year on the planet lasts 4.18 Earth days, due to its proximity to the star, its outer layers have greatly swollen – the radius of WASP-127b is estimated at 1.31 Jupiter’s radius, while its mass is only 0.18 Jupiter’s masses.

The scientists compared the obtained data on the content of water vapor and atomic sodium with the models of the structure of the atmosphere WASP-127b.

They came to the conclusion that the model is best suited in which there are layers of clouds that are opaque in the optical range, but transparent in the infrared, at altitudes corresponding to the pressure between 0.3 and 0.5 mbar. Scientists believe that the technique they used during their work will help identify clouds on other exoplanets.

Composition of the clouds

The composition of the clouds is not yet known, although scientists already understand that they do not consist of water droplets, as on Earth. But there seems to be no interruption with the clouds on the planet. 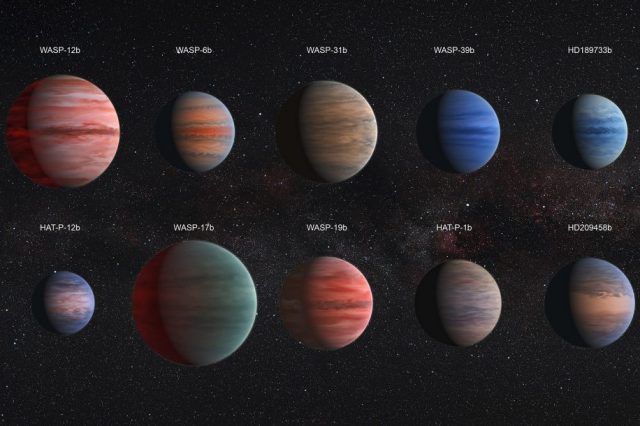