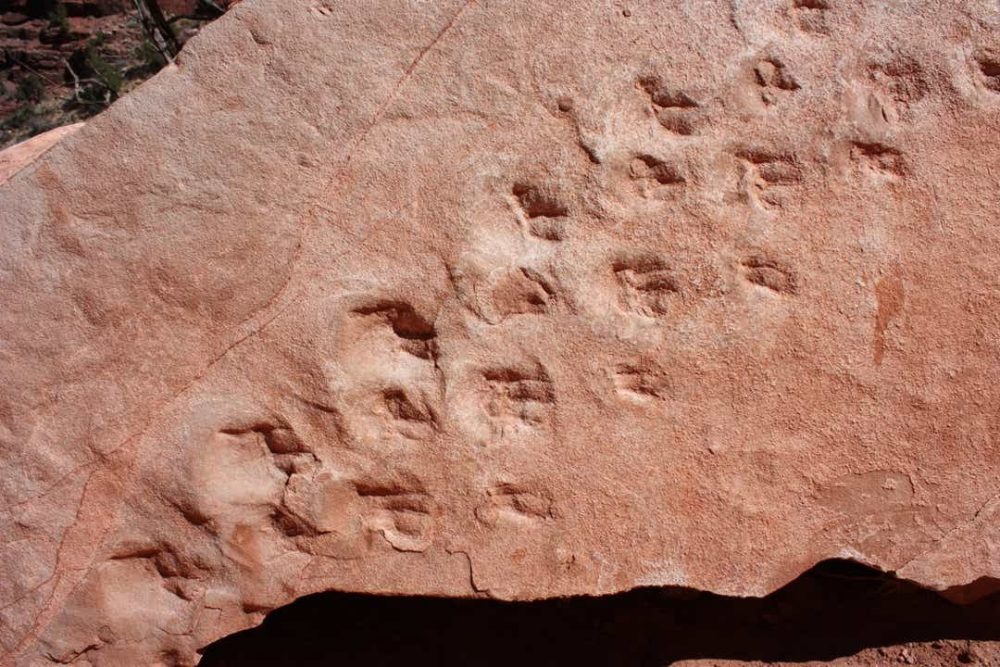 As revealed by researchers, these trackways are the first tetrapod tracks reported from the Manakacha Formation and the oldest in the Grand Canyon region.

A group of researchers has confirmed that a fragmented piece of rock in the Grand Canyon bears on its surface the oldest fossilized animal tracks discovered to date.

The discovery was made back in 2016 when a geologist from Norway was hiking with his studies in the Grand Canyon. Along the way, he spotted a strange-looking rock, the surface of which appeared to have strange markings.

Upon closer inspection, the professor noticed that the odd markings were, in fact, animal footprints. The boulder had tumbled from a cliff and landed near the Bright Angel Trail, a popular hiking spot. The confirmation of the age of the prints are of great interest since similar tracks have been found elsewhere embedded in coal beds, but not sand dunes.

Now, researchers have revealed that the discovery made in 2016 is extraordinary: the footprints on the boulder are the oldest discovered in the Grand Canyon and are some of the earliest fossilized examples of the footprints that were left being by a four-legged animal. Identifying the exact creature that left the tracks is impossible, but experts are confirmed that they were left behind by early amniotes, small animals that laid shelled, fertilized eggs on land.

It is thought that present-day reptiles, birds, and mammals evolved from these creatures.

Although not much is known about the animal that left the tracks behind, a study suggests that the creature was no more than one foot long, and left the footprints behind as it walked up the slope of the ancient sand dune with a lateral sequence gait. Camels and dogs have a similar pace in slow motion, the researcher had explained.

Made out of sandstone, limestone, and mudstone, its composition suggests that during one distant point in history, the area was located on the coast plain when present-day Arizona was on the western edge of the Pangaea supercontinent.

Some 313 million years ago, the Earth was going through the so-called Carboniferous period. The dinosaurs would still take another 70 million years to appear when the Triassic period arrived. The continents had nothing to do with the current ones. The mainland was still concentrated in a single supercontinent called Pangea, which was slowly beginning to separate into pieces.

The rock remains in plain sight among the Bright Angel Trail, and people have walked by it without even paying attention to the historical surface features it bears. It remains unsure as to where the rock will end up, whether it will remain in the grand canyon, or will eventually be transported to a museum and put up for display. Transporting it without damaging will be a difficult task given that the rock itself weight several hundred pounds.

The study detailing the discovery has been published in the journal PLOS ONE.

It is fascinating to see what scientists can deduce by just analyzing and studying footprints that were left behind hundreds of millions of years ago. The discovery in the Grand Canyon tells us that our planet still hides many ancient wonders waiting to be found.