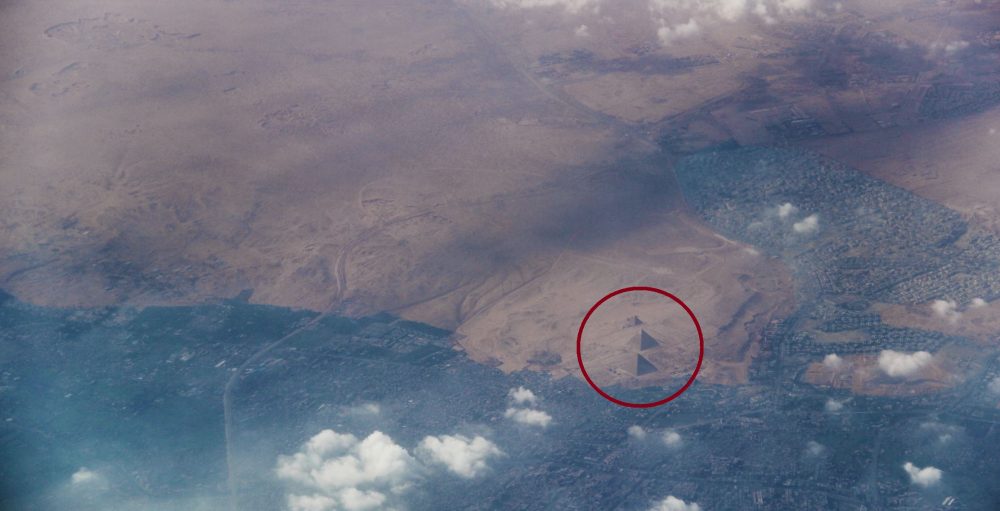 The pyramids are even more impressive when seen from the air.

Although we can’t travel the world freely as we could before due to the COVID-19 still affecting international travel on many levels, nor can we freely see the countless magnificent ancient sites the world has to offer, it doesn’t mean we can’t appreciate them at all. Here are 10 aerial images of the ancient Pyramids that show these amazing ancient monuments from the air.

The most impressive pyramids on Earth are arguably those at Giza. Although they may not be the oldest or largest on Earth, the Giza pyramids are certainly the most magnificent, not only because of their history but because of the many enigmas that remain unanswered surrounding it.

To this date, the most important details about the Great pyramid remain a historical enigma. Despite the fact we’ve been able to study the pyramids of Giza and their respective temples, numerous questions remain unanswered.

This is because strangely, no ancient texts have been found dating back to the time the pyramid was built. This means we don’t have any ancient references that offer insight into the techniques used by the ancient Egyptians to quarry, transport, and leverage the stones, moving them to incredible heights.

Despite this lack of records, we know that the Great Pyramid of Giza is a true ancient wonder.

It remained the tallest pyramid on the surface of the planet for more than 3,800 years. It is also the only known (confirmed) ancient Egyptian pyramid that was built with eight, instead of four sides.

The eight sides of the Great Pyramid of Giza are best visible from the air, at dawn or sunset, on the spring and autumn equinoxes.

This curious feature was documented in I.E.S. Edwards’ 1975 book, the Pyramid of Egypt where the archeologists wrote: “The Pyramid of Egypt” that “In the Great Pyramid the packing-blocks were laid in such a way that they sloped lightly inwards towards the center of each course, with a result that a noticeable depression runs down the middle of each face — a peculiarity shared, as far as is known, by no other pyramid.”

This unique feature was even photographed. In 1940, British Air Force pilot P. Groves flew above the Giza plateau and looked down at the Great Pyramid and noticed it has strange concavities on its sides. This image is believed to be one of the earliest examples of the Great Pyramid’s eight sides.

The workmanship of the Great Pyramid is otherworldly, and its precision is unmatched. Measurements and survey of the Giza plateau have offered a plethora of information relating to the incredible accuracy and precision by which the pyramid of Khufu was built. One example is the ratio of the perimeter-to-height of 1760/280 Egyptian Royal cubits equates to 2π to an accuracy of better than 0.05 percent.

Despite the fact that many Egyptologists like Miroslav Verner—an expert in his field—attribute this precision to pure luck saying that “we can conclude that although the ancient Egyptians could not precisely define the value of π, in practice, they used it,” I would firmly disagree.

I find it very hard to believe that an ancient civilization that managed to construct the Great Pyramid of Giza and used  2.3 million blocks of stone in the process, creating a monument with an approximate weight of 6.5 million tons, left anything to luck or randomness.

We know that the ancient Egyptians were amazing scientists and excelled in various fields, including astronomy, engineering, and physics. This allowed them to build a monument of the size they did and had no issues whatsoever in incorporating numerous mathematical formulas within the core of the structure.

Many people know that the Great Pyramid of Giza is Egypt’s largest pyramid, but not many know its exact details. To construct the Great Pyramid, the builders used 8,000 tons of granite, imported from Aswan. They made use of 5.5 million tons of limestone, much of which was obtained from nearby quarries nearby.

They also used 500,000 tons of mortar. The largest and heaviest stones were quarried near Aswan, some 800 kilometers away from the pyramid’s original construction site.

How exactly the ancient Egyptians transported some of the heaviest stones used in the pyramids construction process remains an enigma, although they may have made use of wooden rollers and even cargo boats which allowed them to move the stones via the Nile River.

The Great Pyramid is Egypt’s most impressive pyramid. But the structure would not stand today the way it does, had it not been for earlier kings which kick-started pyramid building in Egypt.

According to Egyptologists, we can trace the history of the pyramid building of ancient Egypt to the Third Dynasty reign of King Djoser, around 4,700 years ago. Djoser is believed to have commissioned the first pyramid complex in the history of Egypt. His complex covers 15 ha (37 acres) and is about 2.5 times as large as the Old Kingdom town of Hierakonpolis.

The Step Pyramid of Djoser is regarded as the earliest colossal stone building in Egypt and the earliest large-scale cut stone construction. The pyramid is believed to have been designed by the royal architect Imhotep, and completed in no more than 19 years, meaning that Djoser saw the completion of his never-before-seen construction project.

Although it might be expected that a long line of similar, majestic pyramid complexes would follow Djoser’s, this was not the case. Pharaohs that succeeded Djoser attempted but failed building similar monuments. In fact, it wasn’t until the Fourth Dynasty reign of Kind Sneferu that Egypt would be given another pyramid.

King Sneferu is regarded as Egypt’s greatest pyramid builder. Egyptologists credit him with constructing three massive pyramids and one smaller. Sneferu is thought to have commissioned the Pyramid at Meidum, the Bent Pyramid, and the Red Pyramid at Dahshur.

If Djoser and his architect invented the Egyptian pyramid, then it was Sneferu and his royal architects who developed it and laid down the necessary foundations for the construction of Egypt’s greatest Pyramid, the Pyramid of Khufu, a monument built by Sneferu’s son. Had Sneferu not perfected the pyramid design introduced by Djoser, the pyramids of Giza would have looked very different today.