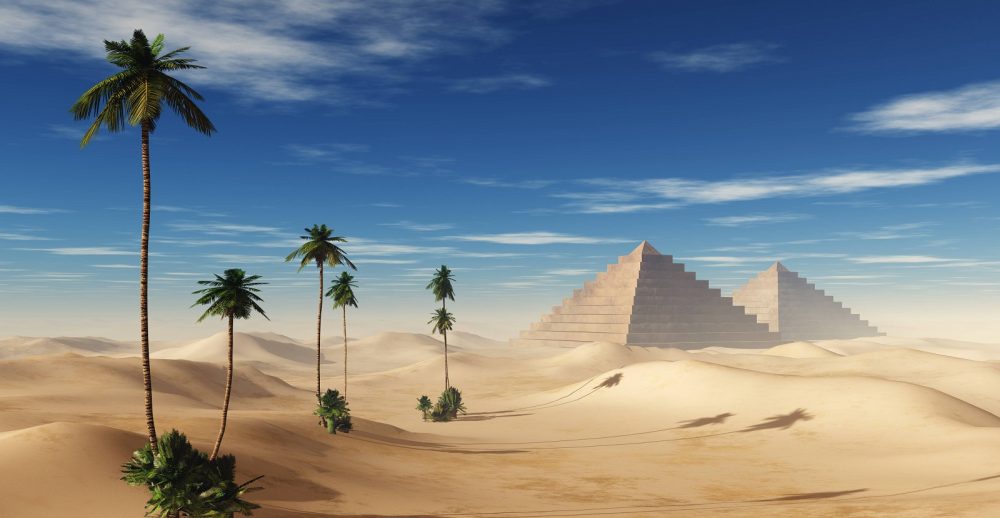 There are so many pyramids out there.

As of 1008, around 130 ancient Egyptian pyramids have been discovered. Regrettably, most of the pyramids in Egypt, which date back thousands of years, have been buried by the desert sands, or have been reduced to rubble. In fact, some pyramids may appear as no more than mounds of rubble. Consequently, archeologists have to put in a great deal of effort to understand what type of structures are being studied.

Curiously, most of the ancient Egyptian pyramids were placed to the west bank of the Nile river, with an exception of the Third Dynasty pyramid of Zawyet el-Amwat.

The most important pyramids ever constructed in Egypt date back to around 2700 BC, and 2500 BC.

During these 200 years, pyramid building techniques were revolutionized in ancient  Egypt, starting with the Step pyramid of Djoser, built by his royal vizier Imhotep, a man that would basically kick-off pyramid construction in ancient Egypt.

It was the work laid down by Imhotep that would later serve as guidelines to architects and engineers designing and building the Great Pyramid of Khufu, the largest pyramid Egypt has ever constructed.

But the journey to building a structure such as perfect as the Great Pyramid of Giza was a long and difficult one.

Numerous pyramids were attempted, not all of them were successfully built. Many failed attempts of pyramids have been discovered throughout Egypt, evidence that building a pyramid was no easy task.

From smaller, step-sided pyramids, eventually, ancient Egyptian builders would evolve making it possible for them to develop the necessary techniques and meet the requirements that allowed them to eventually transport supermassive blocks of limestone and granite and position them into place, building massive, towering structure some of which outlasted even the Egyptian Civilization.

Some of these ancient structures remain buried deep beneath the Egyptian golden sands, waiting one day to be revealed to the world, offering a glimpse of a lost history the sand buried together with them.

Outside of Giza where the three Pyramids belonging to Khufu, Khafre and Menkaure stand, we have the archaeological site of Dashur which is arguably, together with the Saqqara pyramid complex, the most important pyramid site in all of Egypt.

Despite this, there are many other pyramids outside of these three main areas.

In this article, I will take you on a journey as we explore three ancient Egyptian pyramids you have probably never heard of before. Some of these structures may not seem much today as many of them look no more than rubble and piles o stone. Nonetheless, they tell an important part of ancient Egypt’s history.

The Pyramid of Neferirkare Kaki

Nerferirkare Kaki was the third king of ancient Egypt’s Fifth Dynasty acknowledged by the people as a benevolent ruler. During his reign over the land of Egypt, the country saw an increase in the number of administration and priesthood officials of Egypt, eventually leading to a richer society which gave rise to architecturally sophisticated mastabas.

His pyramid was built at the royal necropolis of Abusir, and despite the fact the pyramid was never finished, it is the largest building erected during the fifth Dynasty, equalling roughly the size of the Pyramid of Menkaure.

The pyramid was built in a similar way as the first Egyptian pyramid, the step pyramid of Djoser. Scholars argue that the pyramid of Neferirkare Kaki comprised three main stages of pyramid building.

During the first stage, what the builders did was essentially to create six steps mostly composed of rubble with walls made of local limestone. This feature suggests the pyramid was initially intended to be a Step Pyramid. This is unusual as step pyramids were not a fashion in Pyramid building since the Third Dynasty, some 120 years before Neferirkare Kaki, had the pyramid been completed then, it would have had a height of around 52 meters.

But the pyramid was not left as a step pyramid. A second phase saw the builders fill in the gaps between the steps in an effort to transform the step pyramid into a smooth, true-sided pyramid.

A third stage saw the pyramid grow in size as the builders added a girdle of masonry and smooth casing stones of red granite. But the third phase was never completed. Had it been finished as intended after the third phase, the pyramid would have reached 72 m (236 ft). The pyramids entrance is located to the northern site.

No sarcophagus and the mummy of Pharaoh Nerferirkare Kaki were not found inside the pyramid.

The Pyramid of Djedefre

Djedefre was a Pharaoh of Egypt’s Fourth Dynasty. His father was Khufu, the builder of the great pyramid of Giza. This pyramid is Egypt’s northernmost pyramid.

There’s a debate among experts whether or not the pyramid was ever finished.  Dr. Michael Baud of the Louvre Museum in Paris believes the pyramid as never finished and that the ruins we see today are evidence of an incomplete pyramid.

Other experts contradict this theory, and suggest the pyramid as finished, but was extensively looted of its limestones in the past, eventually causing the pyramid to crumble.

Had the pyramid been actually finished, it would have had a similar size to the Pyramid of Menkaure, the third-largest pyramid at the Giza plateau.

The pyramid’s ancient name was “Djedefre’s Starry Sky,” and this pyramid is said to have been the most beautiful of ancient Egyptian pyramids ever constructed, featuring an extremely polished exterior, built of imported granite, limestone and crowned by one massive pyramidion most like plated in gold or silver.

History Channel’s Documentary titled “The Lost Pyramid” indicated that Djedefre’s pyramid may once have been the highest pyramid ever built at 220 meters (770 ft.). Although controversial, the height of the pyramid is due to its elevated location, and not the actual size of the structure itself, which was around 67 meters in height (220 ft.)

Archeologist Miroslav Verner, who has extensively studied ancient Egyptian pyramids explained in his book “The Pyramids“:

“The destruction started at the end of the New Kingdom at the latest, and was particularly intense during the Roman and early Christian eras when a Coptic monastery was built in nearby Wadi Karin. It has been proven, moreover, that at the end of the nineteenth century, stone was still being hauled away at the rate of three hundred camel loads a day.”

The Pyramid of Amenemhat III

One of the five remaining pyramids of the original eleven at Dashur is the Black Pyramid of Amenemhat III. Formerly called Amenemhet is Mighty, the pyramid earned its name as the Black Pyramid due to its dark decaying appears as a rubble mound.

According to scholars, this was the first pyramid believed to have housed the remains of not only the Pharaoh but the Queen as well.

Although largely destroyed the pyramid is thought to have been 75 high, with a base of around 105 meters in length. The pyramid was built with an angle of 57 degrees.

Contrary to other, more robust pyramids, the Black Pyramid was constructed of mud brick and clay instead of stone. It was, however, encased with limestone as many other pyramids.

One of the greatest mistakes the pyramid builders made was to erect the structure on clay that eventually gave off to the extreme weight of the pyramid, which eventually began to sink.

According to experts, the pyramid was abandoned after the weight of the structure began crushing its underground chambers.

The subterranean structures feature a complex network of passageways where we find the sarcophagus and canopic jars. However, as noted by archeologists, the king’s mummy was not found there which is interesting since most mummies of Pharaohs who built the pyramids have not been found inside the structures.