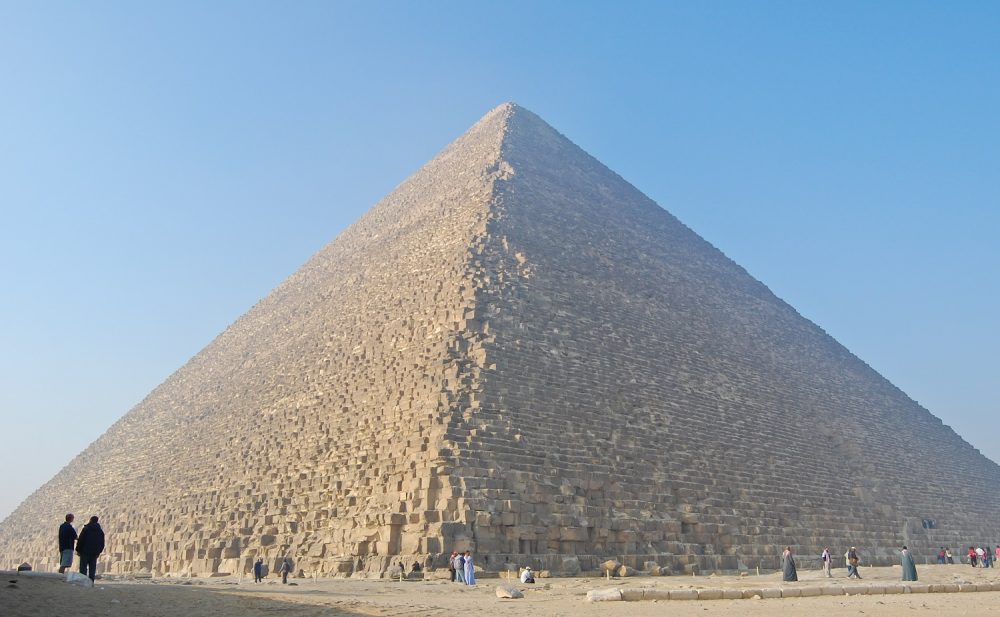 The third-largest pyramid, which is not at the Giza plateau, has a total volume of 1,694,000 cubic meters and took around 17 years to build.

When it comes down to Pyramid building, the ancient Egyptians really knew how to construct.

Evidence of that is more than one hundred and thirty pyramids that have been discovered so far throughout Egypt.

Some of them have since been destroyed, crumbling to history, or to poor choice of materials, but others have stood the test of time, evidence of incredible architectural and engineering skills.

The best example of ancient Egyptian Pyramid building is without a doubt the Great Pyramid of Giza, believed to have been commissioned by Pharaoh Khufu of the Fourth Dynasty (26th century BC) as his eternal resting place. Modern Egyptologists argue that this monumental construction phase was finished in around 20 years, concluding around 2650 BBC.

The pyramid of Khufu remains the only one of the Seven Wonders of the Ancient World largely intact.

Although it has deteriorated through time, the result of natural disaster, climate, and mankind, the pyramid outlasted an entire civilization.

It was so impressive that it remained the tallest building on the surface of the planet for more than 3,800 years.

But the Great Pyramid of Giza is perhaps the culmination of ancient Egyptian pyramid building, as it was the most notorious project ever attempted by this ancient civilization.

But to get there, to build a structure that would survive for more than 4,500 years, the ancient Egyptians went through a number of projects and attempts that eventually climaxed in the construction of one of the largest and most accurate pyramids of all time.

Before attempting such a massive construction process, the ancient Egyptians experimented with pyramids.

The first pyramid to be built in ancient Egypt is that of Pharaoh Djoser. It was precisely then, around 2,700 before Christ that ancient Egyptian engineering and architecture experienced an Eureka moment; From complex mastabas were Pharaohs and royalty were buried, the ancient Egyptians developed Pyramids, and this changed the ancient civilization forever.

Known as the Step Pyramid, the Pyramid of Djoser located in the Necropolis of Saqqara is widely acknowledged as the earliest monumental stone building of Egypt.

The Step pyramid was envisioned as the eternal burial place of Pharaoh Djoser. The pyramid was built by Djoser’s royal vizier Imhotep; the first pyramid builder.  The Step pyramid once stood 62.5 meters (205 ft) tall, with a base of 109 m × 121 m (358 ft × 397 ft) and was clad in polished white limestone. The pyramids ultimate look was drawn from several precedents, the most relevant of which was the Saqqara mastaba 3038 built circa, 2700 BC. This structure was almost a pyramid by accident. It was built in a deep rectangular pit with mudbricks walls six meters in height. The three sides of the mastabas were extended and built out creating eight steps that rise into the air at an angle of 49 degrees.

But once the pyramid was completed, it gave rise to other similar structures.

The Pyramid of Djoser gave birth to the pyramid at Meidum. Although not one of the most famous pyramids in Egypt, this pyramid–which remains largely in ruins–was ancient Egypt’s second attempt to building a pyramid.

Erected around 100 kilometers from Giza, the Pyramid at Meidum was most likely built for Pharaoh Huni, but construction was passed on to Sneferu. The pyramid was probably never finished, and it may have collapsed in ancient times mostly because the builders of the pyramid started experimenting with different techniques, angles, and looks. Evidence of that is that the pyramid was extended at least two times. The builders wanted to turn the step pyramid it was originally into a smooth-sided pyramid. Their efforts, however, were not successful and the massive pile of debris around the pyramid is evidence of an unsuccessful attempt.

But in terms of total volume, what are the largest of the pyramids of Ancient Egypt? You’d be surprised to know that the third largest pyramid of Egypt is not located at the Giza plateau.

Considered a proto-pyramid it was the first such structure built by the ancient Egyptian civilization, and it resulted in a revolution of monumental buildings in Egypt. The total volume of Djoser’s pyramid is 330,400 cubic meters (11,667,966 cu ft).

Located around 40 kilometers from Cairo are the remnants of the most unique ancient Egyptian pyramid ever built. The Bent pyramid is one of the best examples of pyramid building evolution in Egypt, and scholars argue the Bent Pyramid is a perfect representation of a transitional form from building step-sided pyramids to smooth-sided pyramids.

From its foundation, the Bent Pyramid rises towards the sky at a 54-degree inclination. However, the top section of the pyramid, just above 47 meters in height, was altered and built with a much shallower angle of 43-degrees, giving the pyramid its bent appearance.

Also referred to as the North Pyramid, this structure is the largest of three pyramids at the Dashur Necropolis. It is the third-largest pyramid built in ancient Egypt and is considered to be ancient Egypt’s first successful attempt at building a true smooth-sided pyramid.

The Red Pyramid marks the successful transition from step pyramids to smooth-sided pyramids.

Although dubbed the Red pyramid because of the rusty reddish hue of its limestone, the pyramid was not always red, as the builders cased it with extremely polished white Tura limestone.

The Pyramid of Khafre

The Pyramid of Khafre is the second-tallest and second-largest of the ancient Pyramids of Giza argued to have been constructed s the eternal resting place for the  Fourth-Dynasty pharaoh Khafre, who ruled from c. 2558 to 2532 BC.

The largest of the pyramids ever built in ancient Egypt, the Pyramid of Khufu is a towering structure built of granite and limestone that once rose to the sky at 146.7 meters (481 ft). Today, the height of the pyramid has been calculated at 138.8 meters (455 ft).

The pyramid was supposedly the eternal resting place of Pharaoh Khufu and was built in around 20 years. It is the culmination of ancient Egyptian pyramid building, and not a single monument of ancient Egypt is as impressive as the Great Pyramid.

With a total volume of 235,183 cubic meters (8,305,409 cu ft), the Great Pyramid of Giza is a mammoth building. In fact, it is so large, that scholars estimate that the builders of the Khufu’s Pyramid made use of 5.5 million tons of limestone, 8,000 tons of granite (imported from Aswan), as well as 500,000 tons of mortar to build the Great Pyramid.