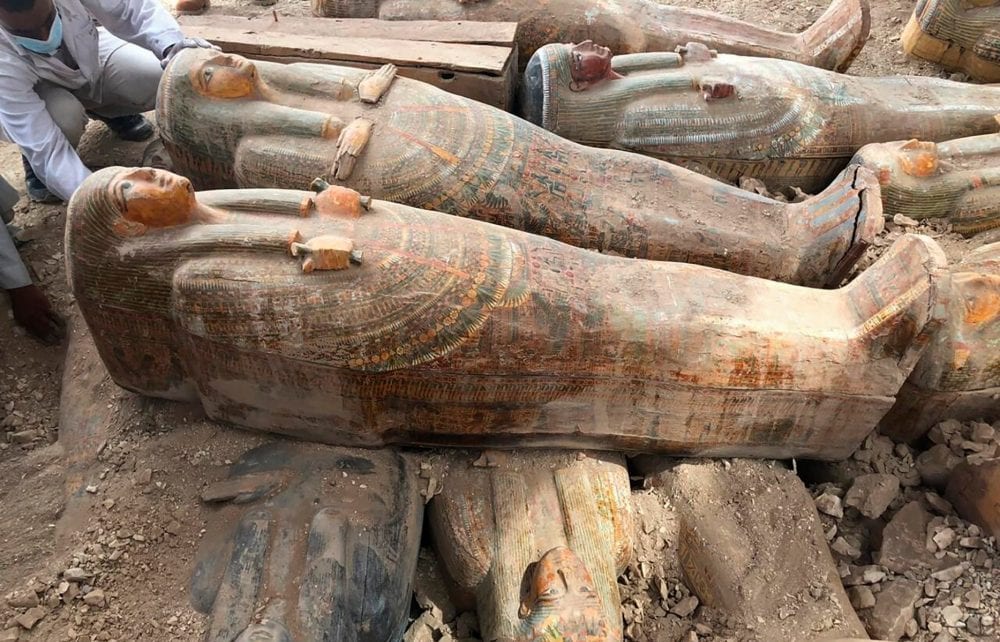 Which archaeological discovery made in 2020 do you consider as the most significant?

Hundreds of new artifacts of the ancient world fall into the hands of scientists every year, but few are capable of causing a sensation. Fortunately, we saw an incredible number of extraordinary archaeological discoveries in 2020, including some that truly rewrote parts of the written history.

Archaeological discoveries allow us to touch the past and shed light on mysteries that have remained unsolved for thousands of years. Some discoveries belong to professional archaeologists, others – to ordinary people who accidentally came face to face with history.

In each case, the background of the discovery is meaningless when the find is of great significance to history. We have selected 10 examples of massive discoveries that we believe deserve your attention. Of course, there were dozens of other finds that could have made this list but this is our personal list. With this said, let’s discuss what happened during the last 12 months.

During research on low-resolution LIDAR images of a region near the Guatemala-Mexican border, a team of archaeologists came across something that appeared to be a massive man-made platform.

This was followed by a more extensive LIDAR survey that revealed the true size of the platform – almost a mile in length. For now, it has been dated to 1000 – 800 BC.

Researchers believe that this colossal structure was built in a group effort by different ethnic groups that participated and it took generations to build.

In the end, research is yet in its earliest stages and who knows that else will be revealed after extensive excavations. For now, I consider it one of the most significant archaeological discoveries of 2020 but I believe it has the potential to become an even greater find.

Even today, the Roman Forum keeps secrets that unexpectedly emerge year after year. Earlier in 2020, an ancient hypogeum was unearthed during renovation work at the ancient Roman Senate house.

The stone sarcophagus and the stone altar in situ are believed to be associated with Romulus, who in accordance is related to the mythical founding of Rome.

It is curious that the shrine was discovered more than 120 years ago but was later reburied and forgotten.

For now, experts do not believe that the sarcophagus ever held Romulus’s body but the location corresponds to that given for his tomb by ancient Roman writers.

While this may not sound like something you would put next to the most significant archaeological discoveries of 2020, I believe that its age is well-worth a mention. Archaeologists discovered a miniature sculpture at the open-air Lingjing site in China that has been dated to 13,500 years ago.

At this point, this is considered to be the oldest Chinese artwork. Measuring less than 2 centimeters long and 1.5 centimeters high, the miniature bird sculpture can still surprise you. Even at this small size, experts claim that the artist used six different carving techniques. This is a piece of clear evidence for the serious craftsmanship that went on with anything created by ancient artists.

During an extensive surface survey in an ancient mound site in Turkey, archaeologists discovered a stone stela in ancient Luwian hieroglyphs.

Dated to the 8th century BC, the stela mentions a little-known King called Hartapu and his military achievements.

Put together with the variety of ceramics found in the region of the Türkmen-Karahöyük site, experts have validated that this place must have once been one of the most powerful cities or regional centers in Anatolia.

With the discovery of this Luwian Royal Inscription, scholars have also suggested that this should have been King Hartapu’s capital.

Yes, this may not exactly be an archaeological discovery but it is a technological advancement that will impact the future of archaeology.

This new technique will give experts the ability to date pottery using only the animal fat residue that remains in the artifacts.

Richard Evershed, the biogeochemist behind this new method, claims that he can now isolate compounds from even the most miniature potteries and carbon date any remaining fat residue precisely. That is, of course, if the pottery was used with dairy products or meat.

The important thing here is that this method can be applied to artifacts found all over the world.

Earlier this year, a massive Viking DNA study completely changed the general perception about the origin of Vikings and their explorations.

The massive research was conducted on more than 440 Viking skeletons discovered in an astonishing 80 different locations.

The traditional perception of Vikings is that they all originated from Scandinavia. This archaeological discovery from earlier in 2020 revealed that the Viking explorers were much more genetically diverse.

Furthermore, in contrast to the popular belief that Vikings were light-haired and eyed, the DNA study revealed that the opposite was quite common too.

A major archaeological discovery earlier in 2020 revealed the first English Playhouse, previously known from old lawsuits from the 16th century.

The playhouse, called the Red Lion, is dated to the 1560s and was discovered, I’d say, by a great deal of luck. The team of archaeologists began excavations at the very location mainly guided by old mentions that suggested the playhouse was somewhere around this place.

For now, it seems like the Red Lion did not operate as a playhouse for a long period but it is considered to be the first of its kind. Before this discovery, it was believed that playhouses were temporary and built for special occasions by the rich.

The Saqqara Necropolis hit the headlines on several occasions this year with two consecutive archaeological discoveries which we can easily consider as the largest for 2020.

It all began around September when 13 ancient coffins, dated to approximately 2500 years ago, were unearthed in the Saqqara Necropolis.

Then, at the beginning of October, the Egyptian Ministry of Tourism and Antiquities revealed the massive discovery of 59 ancient sarcophagi near the step pyramid of Djoser.

But this wasn’t the end of it. A month later, they revealed the discovery of more than 140 coffins and gilded statuettes, once again found nearby.

As you can probably tell, this series of discoveries is massive but it is also just the beginning. Experts believe they have unearthed nothing but a small percentage of the treasures hidden in the region.

Earlier this year, archaeologists achieved something extraordinary. An entire buried Roman city was mapped using ground-penetrating radar. While this is one of the most significant archaeological discoveries of 2020, imagine its significance when excavations actually take place and unearth the city.

Named Falerii Novi, this city thrived from 241 BC to 700 AD. Researchers were able to map the majority of the city without digging a single hole in the ground.

Unfortunately, the location is currently protected by the law which does not allow any excavations to begin. Even according to one of the researchers, excavating it would take decades, if not centuries.

Although the official excavations began in 2019, nothing was revealed about Karahan Tepe until less than a month ago. Located in Sanliurfa, Turkey, it took decades before official approval of excavations could be given to archaeologists.

Now, despite the current situation with Coronavirus that interfered with the work, archaeologists have unearthed structures, buildings, and statues. Aside from that, more than 250 massive obelisks have been located in situ, similar to the ones in Gobekli Tepe.

The most important fact here is that Karahan Tepe may as well be older than Gobekli Tepe which by far is known as the oldest temple in the world. Excavations will continue in 2021 and will likely reveal much more than what has been accomplished by far. Nevertheless, this can be considered as one of the most significant archaeological discoveries in 2020.