The United States Navy has reportedly been working on a futuristic, extremely fast aircraft that strangely resembles what many people today would call a UFO.

The mystery vehicle can be used in the water, in Earth’s atmosphere, and even in space.

In fact, the US Navy has already been granted a patent for their advanced ‘aircraft’.

As noted in recent reports, the mysterious aircraft is an unusual vehicle that makes use of an ‘inertial mass reduction device’ to travel at ‘high speeds’.

In other words, the recently patented aircraft uses technology like no other aircraft on Earth. It makes use of complex technologies that will allow the flying vehicle to reduce its mass, lessening inertia, which will make the aircraft travel at extremely high speeds.

The patent, which was first mentioned around 2016 describes extremely advanced technologies that would allow for a reduction of mass using techniques which include, but are not limited to the generation of gravity waves.

Here’s more about the patent:

The patent also describes how “It is possible to reduce the inertial mass and hence the gravitational mass, of a system/object in motion, by an abrupt perturbation of the non-linear background of local spacetime.”

The vehicle described in the patent includes a compartment filled with gas. It is made to vibrate using powerful, electromagnetic waves. This produces vacuum around the craft, allowing it to travel at greater speeds, unlike conventional aircraft.

What’s even more interesting is the fact that the mystery vehicle can be used in the water, in Earth’s atmosphere, and even in space.

‘It is possible to envision a hybrid aerospace/undersea craft (HAUC), which due to the physical mechanisms enabled with the inertial mass reduction device, can function as a submersible craft capable of extreme underwater speeds… and enhanced stealth capabilities,’ the patent reveals.

“This hybrid craft would move with great ease through the air/space/water mediums, by being enclosed in a vacuum plasma bubble/sheath.”

Whether or not the UFO-like aircraft described in the patent was built or not remains a mystery. But the sole idea that the military is working on such tech is evidence that they’ve been developing extremely futuristic, and exotic technology for years.

It is noteworthy to mention that similar patents have been described in the past. In 2004, for example, we see another patent–US20060145019A1– was also registered. The patent describes a “spacecraft having a triangular hull with vertical electrostatic line charges on each corner. The line charges create a horizontal electric field that, together with a plane wave emitted by antennas on the side of the hull, generates a force per volume providing a unique combination of both lift and propulsion.” 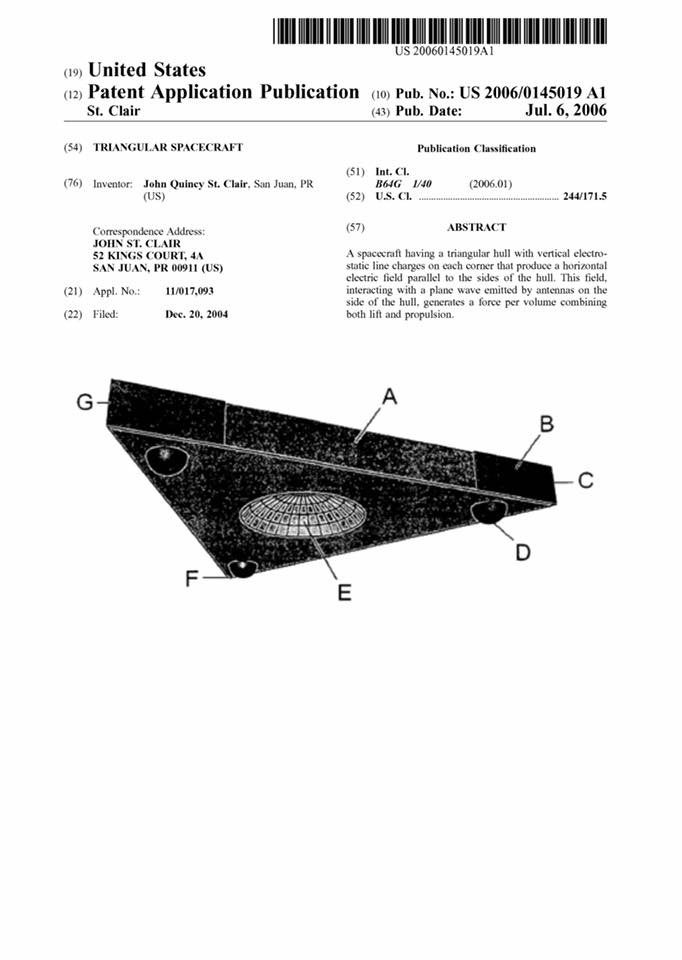 Not long ago we revealed that the US Government was extremely interested in wormholes, antigravity, invisibility cloaking, warp drives, and high energy laser weapons, and investigated their feasibility in the past. This was revealed to the general public after the Defense Intelligence Agency (DIA) released the project list in response to a freedom of information request.