It’s almost 40 years since scientists discovered what wiped out the dinosaurs: an asteroid hitting Earth near modern-day Mexico. That was it, or so we thought.

A paper published today in Science further supports an alternative hypothesis: that catastrophic events following the impact could have helped cause the end of the dinosaurs and many other forms of life.

This builds on earlier work – including some published last year – suggesting a connection between the asteroid impact, increased volcanic eruptions, and the mass extinction event.

Back in 1980, the American experimental physicist Luis Alvarez, his geologist son Walter and their colleagues published an influential paper in the journal Science.

In it, they outlined evidence of a global catastrophe, buried in a layer spread all over the planet, about 66 million years ago.

They found high levels of iridium – a rare element in Earth’s crust, but common in meteorites. They found shocked quartz – grains of quartz with telltale fractures from the blast wave of the impact, as well as evidence of molten rock thrown out from the impact blast.

With the later discovery of the Chicxulub impact crater on the Yucatan Peninsula, Mexico, the case seemed sealed.

The reign of the dinosaurs ended with a meteorite impact, marking the end of the Cretaceous, and the start of the Paleogene period called the K-Pg boundary.

Was there something else?

Yet within the Earth science community, discontent continued to simmer.

The coincidence seems too great.

In understanding the link between flood volcanism, meteorite impacts, and extinctions, timing is everything.

In the new Science paper, a team from the United States and India present some of the most precise dates yet for the enormous eruptions in India, in a unit known as the Deccan Traps – an enormous flood basalt province in Western India that covers more than 500,000km2 and in places is more than 2km thick.

They found that the best date for the Chicxulub impact – at 66.052 million years ago – was within 50,000 years of the peak eruption period of the Deccan Traps, meaning that the impact, and the ramp-up in volcanism, were essentially simultaneous.

A connection between an impact in the Caribbean and volcanism in the Indian Ocean may seem tenuous, but in planetary science, these associations are not uncommon.

One dramatic example is the Caloris Basin on the planet Mercury – a 1,500km-wide structure from an earlier meteorite impact.

Antipodal (at the opposite side of the planet) to this is a bizarre, fractured landscape called the disrupted terrain, which formed from shock waves from the impact at Caloris.

This forms a precedent of sorts – an impact can create geological changes at vast distances. But back on Earth 66 million years ago, Chicxulub and the Deccan Traps weren’t quite antipodal.

The Deccan Traps formed when that part of what is now India was roughly over present-day Reunion Island, a small French Island near Madagascar. This island is still volcanically active and powered by the same mantle upwelling that caused the Deccan volcanism.

The Yucatan Peninsula, like much of the Americas, was significantly closer to Europe (see below).

But that may not matter. It has long been argued, since at least Charles Darwin in 1840, that earthquakes may trigger eruptions.

The mechanisms are not well understood. Suggestions range from bubble formation in magmas, to the development of fractures in the crust allowing magma to escape faster.

It has been recognized, though, that despite their distance from earthquakes, some volcanoes are simply more sensitive to earthquake activity than others, particularly very active volcanoes. Few volcanic events were more active than the Deccan Traps.

At the same time as the Deccan volcanic ramp-up, the global mid-ocean ridge system in the Pacific and Indian Oceans seems to have experienced increased activity.

Analysis of global gravity has indicated anomalously thick crust at the K-Pg boundary, formed due to excess volcanic activity. This effect is only seen in the fastest-spreading and thus most volcanically active, systems in the Pacific and Indian Oceans.

Together, these observations suggest a global pulse of volcanic input at the time of the Cretaceous mass extinction, driven by the shock wave of the Chicxulub impact.

Exactly how this perfect storm of natural disasters – an asteroid collision and increased volcanic activity – drove the mass extinction of so much life on Earth is unclear at the moment.

Either the Deccan eruptions did not play a role – which we think unlikely – or a lot of climate-modifying gases were erupted during the lowest volume pulse of the eruptions.

Volcanism can warm the Earth, due to the eruption of greenhouse gases like methane and carbon-dioxide. It can, along with impacts, also cool the atmosphere by adding sulfur aerosols or dust, respectively.

Gases can also reach the atmosphere from magma stewing below the surface, even without eruptions.

It’s not precisely clear how all these combined to decimate terrestrial and marine ecosystems, but an accurate timeline of events is critical to unravelling these interactions.

Underground Labyrinth: 5 Things You Should Know About the Step Pyramid’s Subterranean World 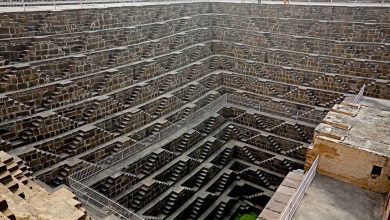 Ancient Wonders of Design: The Stepwell of Chand Baori and its 3,500 Steps 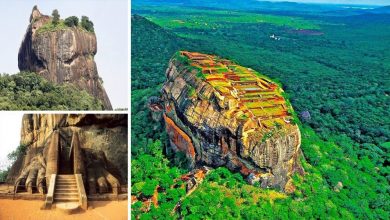