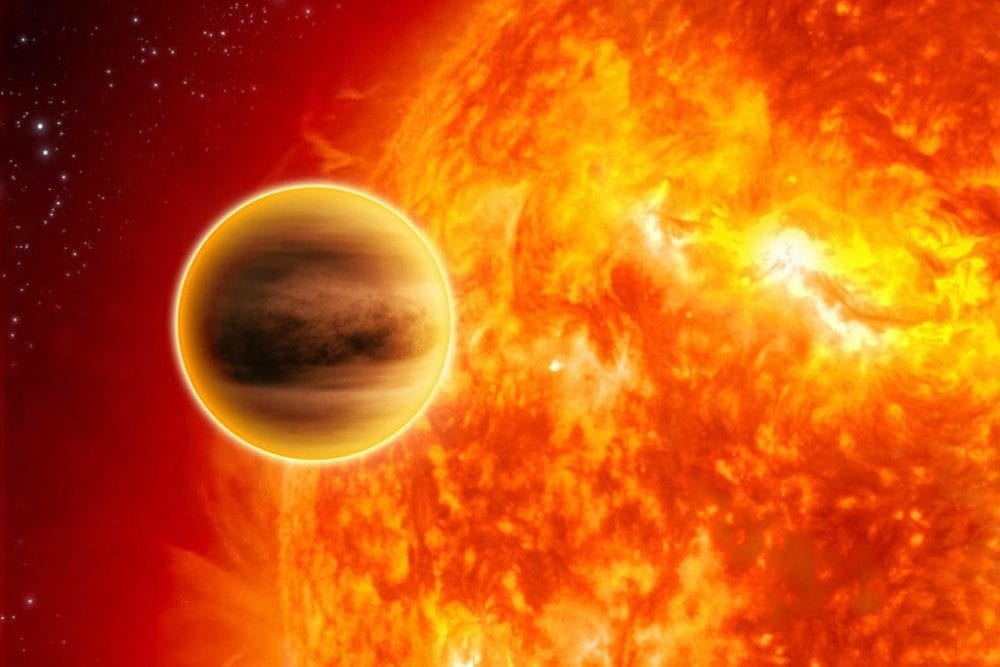 This molecule has never been detected in the atmosphere of an exoplanet before.

The molecule hydroxyl is formed in the Earth’s atmosphere under the influence of ionizing radiation. Ultraviolet light (UV) coming from the sun causes a reaction between water vapour and atomic oxygen which then produces hydroxyl (OH) radicals.

This so-called ‘atmospheric detergent’ plays an important role in purging pollutant gasses like methane and carbon from the atmosphere.

Until recently, scientists have not been able to find it in the atmosphere of planets orbiting other stars. Now, it was reported that astronomers have detected hydroxyl for the first time in a rather curious exoplanet.

1. Astronomers from Trinity College Dublin and Queens University in Belfast have studied the exoplanet WASP-33b which a particularly curious and rare exoplanet suitable for atmospheric studies.

2. It orbits the star HD 15082 in the constellation Andromeda, about 400 light-years from the Sun, and is known as an ultra-hot Jupiter.

4. At these temperatures, chemicals in the atmosphere emit radiation with distinct spectral imprints, allowing astronomers to distinguish them from the star’s radiation.

5. With the help of the Subaru telescope, astronomers noticed traces of the hydroxyl molecule in the atmosphere of the exoplanet.

6. Astronomers believe that under the extreme conditions of WASP-33b, the hydroxyl radical is formed by the breakdown of water vapor.

7. Although astronomers detected only a small signal of this molecule, it is a breakthrough discovery.

8. This is the first such case in history and proves that astronomers are already beginning to study the detailed chemistry of distant worlds even with the currently available instruments. We can only imagine what will be discovered when the new advanced telescopes are launched in the upcoming years.

9. The instrument used for this research was the InfraRed Doppler (IRD) which is a new piece of technology capable of detecting atoms and molecules in the atmosphere.

10. For now, the capabilities of the instrument are limited to extremely hot planets but in the near future, scientists will develop similar techniques that will be applicable to cooler planets and exoplanets that are as similar to Earth as it gets.

In a similar recent discovery…

Last week, astronomers found methanol for the first time in the warm protoplanetary disk around the young star HD 100546, which most likely got there from the interstellar medium.

Since there are no conditions for the formation of methanol in a warm disk, the scientists came to the conclusion that methanol-rich ice particles entered the disk from dark clouds of gas and dust, or earlier in the outer part of the disk there was a vast cold region where methanol was able to form.

However, the second version seems less likely, which means that methanol entered the disk from the interstellar medium.

This means that the “building blocks” of prebiotic molecules are able to be stored in protoplanetary disks during their evolution and can subsequently be incorporated into planets and small bodies.