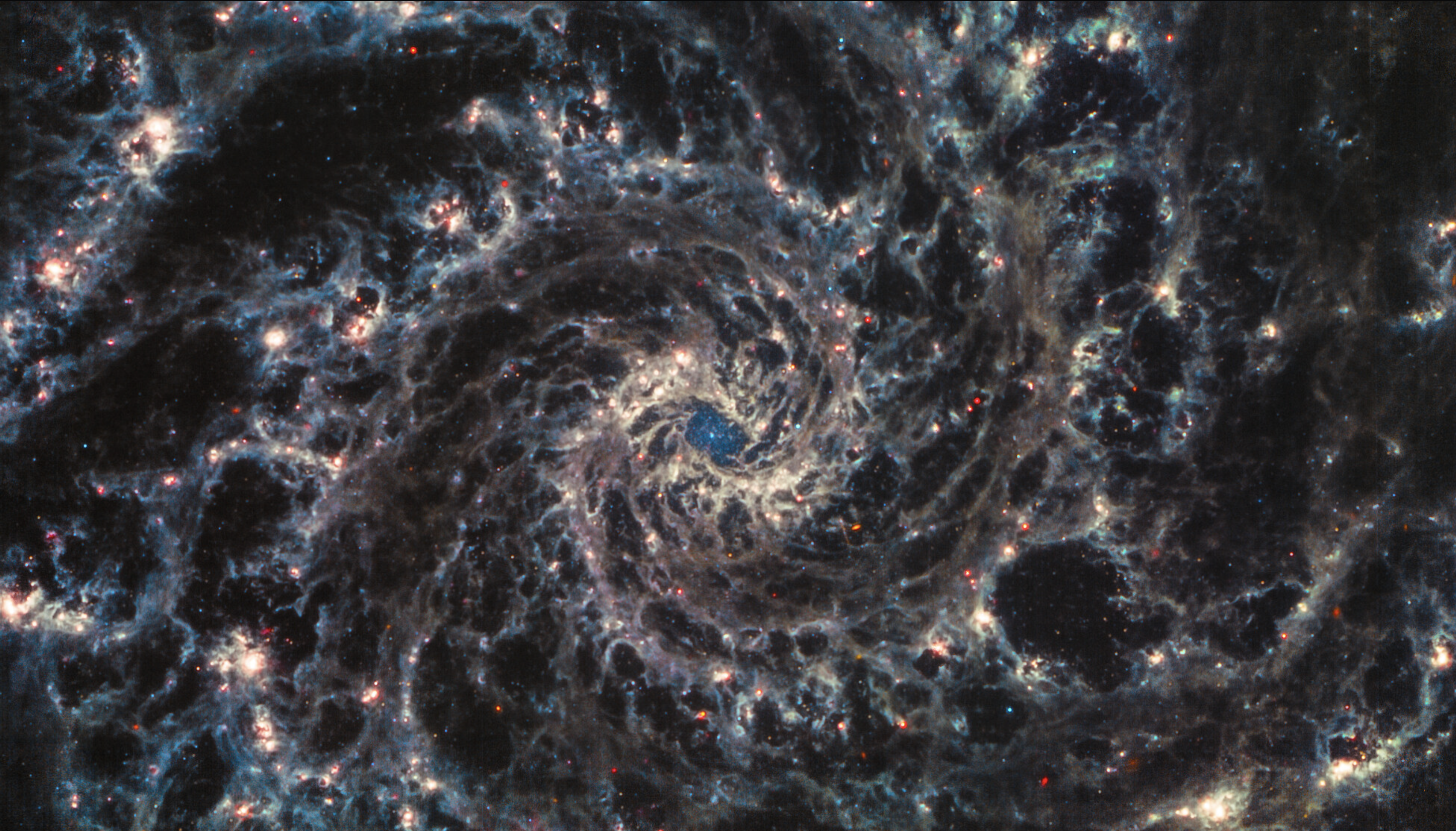 This hypnotic view of the Phantom Galaxy shows how much can be processed by astronomic data gathered by the James Webb Space Telescope. Looking at this stunning view of NGC 628 -- aka Messier 74 -- is almost like looking into a wormhole.

Another stunning view of NGC 638, aka Messier 74, has been revealed in a dataset taken by the James Webb Space Telescope and processed by Judy Schmidt. She has a decade-long experience in processing astronomical data.

Fresh data from deep space shows an image of what is best described as a galactic wormhole spinning in front of our eyes.

Another stunning dataset captured by the James Webb Space Telescope of the so-called “Phantom Galaxy,” taken with the mid-infrared camera, perfectly captures the eerie glow of the galaxy, which is located a million miles away from Earth.

“I’ve been doing this for ten years now, and [Webb] data is new, different, and exciting,” Schmidt told Space.com in an interview. “Of course, I’m going to make something with it.”

The galaxy is highlighted by dust lanes, known as NGC 628 or Messier 74. As a result of its symmetrical shape, some astronomers call the Phantom Galaxy “the perfect spiral.” Scientists believe an intermediate-mass black hole is at the galaxy’s center.

Despite having been photographed before, Hubble Space Telescope images show that NGC 628’s spiral arms differ significantly from the spiral structure that was captured by Webb’s mid-infrared camera.

Hubble and the Wide-field Infrared Survey Explorer (WISE) have imaged the galaxy many times. However, as opposed to previous efforts, Webb’s imaging stands out for its unique 18-segment hexagonal mirror and deep-space location, along with its mid-infrared range, highlighting cosmic dust and offering a never-before-seen view of the Galaxy.

Webb first observed M74 in July of 2022, and scientists were quick to take the data and work with it. As we revealed in a previous article, Gabriel Brammer, one of the researchers at the Cosmic Dawn Center at the Niels Bohr Institute at the University of Copenhagen, shared the data with different filters on Twitter. According to Brammer, the Phantom galaxy resembles our Milky Way.  Speaking to the Independent, he said: “You can see all these knots of individual stars forming; individual supernovae have gone off and really study that in detail.”

Many of Webb’s images are made available to the general public, allowing amateur photographers and scientists to use the data and work with it, as long as proper attribution is given.

A nebula and very young galaxies were among the deep-space objects the telescope explored on its first operational day on July 12. Jupiter’s moons and rings were also captured in infrared on July 14, along with a view of Jupiter’s infrared atmosphere.

The work from just that week shows Webb’s ability to switch between far-off objects and those near its viewfinder in the solar system.

You can see more images processed by Schmidt here.