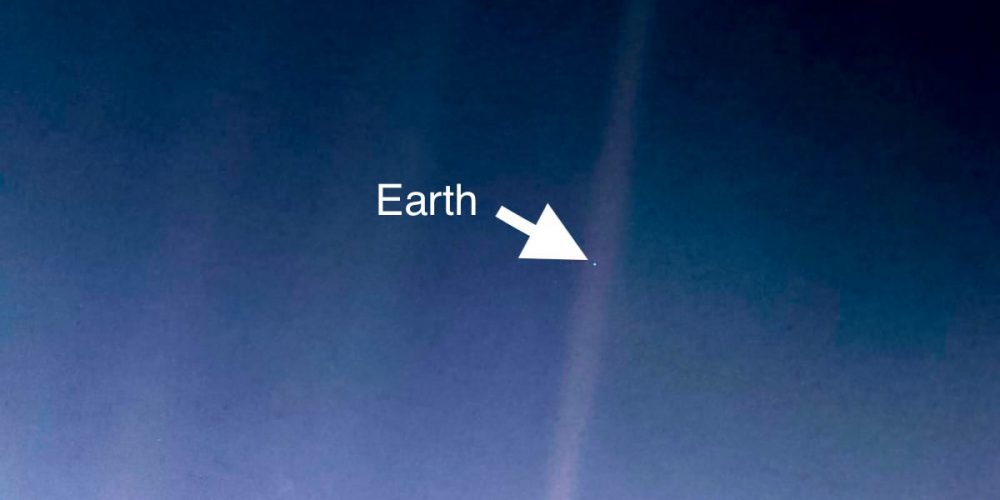 "If observers were out there searching, they would be able to see signs of a biosphere in the atmosphere of our Pale Blue Dot..."

Is there anyone else out there? Are we the only planet in the Galaxy capable of sustaining life? These questions are far more profound than we understand. We are likely not alone; the galaxy we live in is such a massive place that it is improbable that life did not come into existence elsewhere. In fact, numerous studies have suggested that life should be abundant across the universe.

The saying that “Earth is a star in someone else’s sky” is one I truly love.

I firmly believe that there are beings out there, inhabit distant worlds, asking the very same questions we do today; are we alone? Is there anyone out there?

Just as we observe distant exoplanets orbiting stars in distant systems, there could be beings looking towards the sky—perhaps even with telescopes, searching their sky for plants that could have life.

Aliens can see Earth is inhabited

A paper published in the Monthly Notices of the Royal Astronomical Society, titled “Which Stars Can See Earth as a Transiting Planet,” suggests that our planet, the blue marble we call home, is visible from distant worlds located as far away as 300 light-years from Earth.

We are so insignificant in the vastness of space. The planet Earth is but a grain of sand, and perhaps the best illustration of this is the image taken by the Voyager 1 spacecraft as it passed Saturn, showing Earth from a distance of billions of miles away; our world is but a dot in space. This image, the iconic Pale Blue Dot photograph, proves how little we are. In that image, our plant is visible as merely as a bright speck within the sunbeam; it appears as a softly blue dot.

It carries a powerful message; it tells us that from vast distances if there is someone out there, our planet would be visible as a star to them.

The study by Lisa Kaltenegger and Joshua Pepper looks into the exoplanets that have a “direct line of sight to observe our world’s biosphere from vast distances. They have identified as many as 1,004 main-sequence stars—similar to our own sun—that are likely home to Earth-like planets, orbiting their stars in the so-called Goldilocks zone.

These worlds are located no farther than 300 light-years away from Earth, which means that if there are alien beings there, and they have technology equal or superior to ours, they should detect chemical traces of life on Earth.

This means that if there are alien astronomers in one of those 1,004 star systems with the tools and means to look into space and come across Earth, they would be able to spot our planet and see there’s life on it.

“If observers were out there searching, they would be able to see signs of a biosphere in the atmosphere of our Pale Blue Dot,” explained associate professor of astronomy in the College of Arts and Sciences and director of Cornell’s Carl Sagan Institute Lisa Kaltenegger.

Kaltenegger and Pepper came up with a list of the thousand closest stars using data from NASA’s Transiting Exoplanet Survey Satellite.

As revealed in a Cornell University statement, even though only a small fraction of exoplanets will happen to be randomly aligned with our observational line of sight, which allows us to see them transit their stars, all of the thousand sts they’ve identified in their study can see Erth transit the Sun, which means if there are alien astronomers with technology similar to ours o one of those exoplanets, they have the means to see there is life on Earth.

“If we found a planet with a vibrant biosphere, we would get curious about whether someone is there looking at us, too,” Kaltenegger revealed.

The list of star systems created by Pepper and Kaltenegger can point astronomers in the right direction in their search for life in the galaxy.

So, remember waving to the stars next time you look up. Maybe someone is doing the same thing on exoplanets light-years away.

Source and reference: https://doi.org/10.1093/mnrasl/slaa161 / Cornell University / All other sources are linked throughout the article.