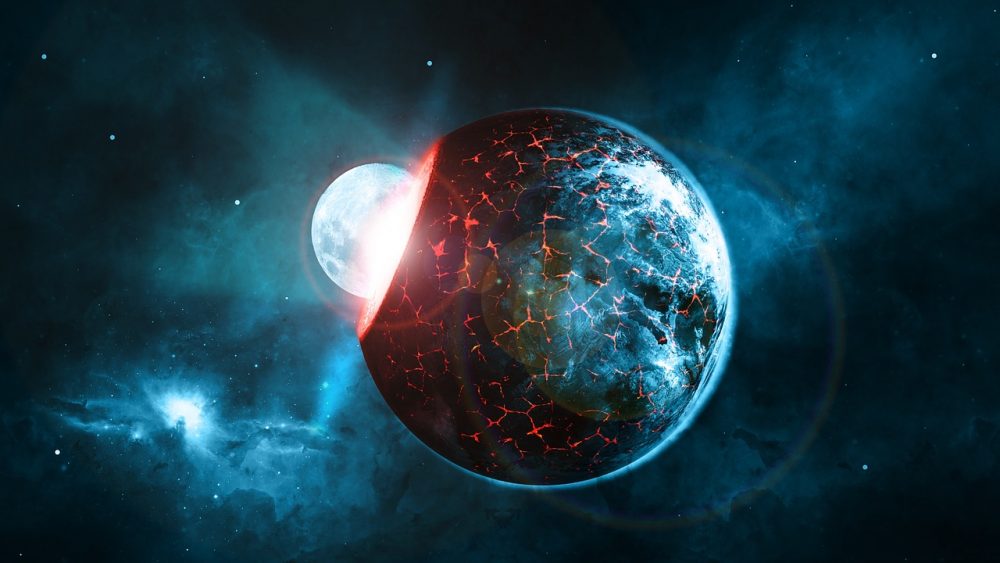 Most of Earth's life-essential elements probably arrived with the planetary collision that produced the moon. Petrologists now conclude Earth most likely received the bulk of its carbon, nitrogen and other life-essential volatile elements from a collision with a Mars-sized planet more than 4.4 billion years ago.

Researchers revealed that the ingredients for life on Earth originated on another planet and were most likely transferred to Earth when the cosmic body smashed into the Earth, forming our Moon.

The discovery sheds new, unprecedented light on Earth’s beginning and could help scientists understand how life can develop on other planets across the universe.

Scientists say that the life-bringing collision took place some 4.4 billion years ago when our moon also formed.

“From the study of primitive meteorites, scientists have long known that Earth and other rocky planets in the inner solar system are volatile-depleted,” said study co-author Rajdeep Dasgupta.

“But the timing and mechanism of volatile delivery have been hotly debated. Ours is the first scenario that can explain the timing and delivery in a way that is consistent with all of the geochemical evidence.”

Scientists believe the new study has important consequences for searching for life on other planets and moons in the universe.

As noted by experts, the so-called ‘giant impact hypothesis’ tells us that Earth’s moon was formed from the debris that floated around our planet after it was impacted by a planet the size of Mars.

The new study suggests that the cosmic collision delivered the most volatile elements essential for life as we know it to Earth.

It is believed that the planet that impacted ancient Earth had a sulfur-rich core.

Evidence supporting the new theory comes from a combination of high-temperature, high-pressure experiments in Dasgupta’s lab. Scientists can study the geochemical reactions that take place deep within a planet under intense heat and pressure.

Thanks to several experiments, the study’s author and graduate student Damanveer Grewal obtained the necessary evidence to test a long-standing theory that Earth’s volatiles were transported after a collision with an ‘embryonic planet‘ with a sulfur-rich core.

The sulfur content of the planet that impacted Earth is important due to the puzzling array of experimental evidence about the carbon, nitrogen, and sulfur in all parts of the Earth other than the core.

“The core doesn’t interact with the rest of Earth, but everything above it, the mantle, the crust, the hydrosphere, and the atmosphere, are all connected,” Grewal said. “Material cycles between them.”

Dr. Dasgupta explains that the new study may help scientists to understand more about how the ingredients for life, as we know it, might form on other rocky planets similar to ours.

“This study suggests that a rocky, Earth-like planet gets more chances to acquire life-essential elements if it forms and grows from giant impacts with planets that have sampled different building blocks, perhaps from different parts of a protoplanetary disk.”

“This removes some boundary conditions,” he said. “It shows that life-essential volatiles can arrive at the surface layers of a planet, even if they were produced on planetary bodies that underwent core formation under very different conditions.”

“That means we can broaden our search for pathways that lead to volatile elements coming together on a planet to support life as we know it.”

The research is published in the journal Science Advances.