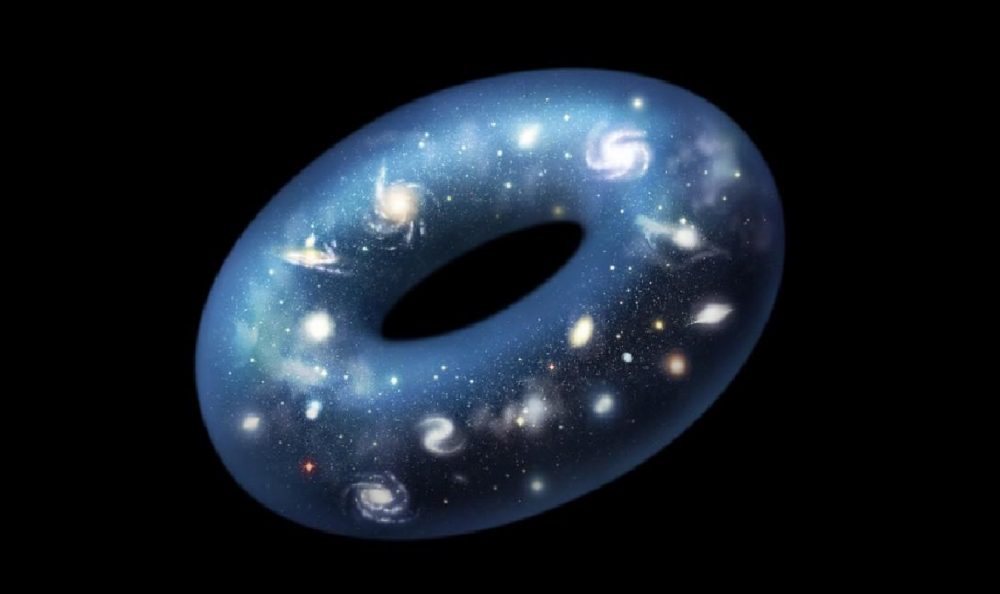 Probably, the size of the universe is simply several times larger than the limits that human civilization can observe with our current technologies.

An international group of scientists who are directly studying the relic radiation suggested that the universe can exist in two forms, previously little known to science. In particular, the scientists stated that in fact, the Universe may not be three-dimensional or four-dimensional, but flat, with a certain thickness of the “layer”. This is what explains its constant expansion.

The second option is that the Universe when viewed from the side, could have the shape of a huge three-dimensional donut. In this case, it is quite reasonable to assume that having taken off from one point of the Universe, at a certain speed and certain time costs, you can soon return to its original position.

1. Thomas Buchert, who heads the group of enthusiasts, conducted a whole range of studies with his colleagues, within which scientists carefully studied all the properties of the light emitted by the universe.

2. Intermediate research results turned out to be such that space in all dimensions can be closed. Therefore, in this case, the size of the universe must necessarily have some limits. Scientists have suggested, quite possibly, in fact, the Cosmos is not as boundless as researchers have been saying for many years.

3. Probably, its size is simply several times larger than the limits that human civilization can observe with its current technical development.
For example, the border of the Universe may be located at a distance of 45 billion light-years – a distance beyond the reach of scanning by the technical means of modern mankind. But of course, this could soon change and in a decade time (for example) we may even see the border of the Universe with more advanced instruments.

4. Thomas Buchert noted that if the universe is flat, its expansion will never end. However, if it is still closed in its structure, as a three-dimensional donut, then eventually, sooner or later, outer space will self-destruct.

5. There are plenty of factors that lend credibility to the three-dimensional donut universe to the point that it is surprising. For instance, astrophysicists focused on disruptions in the CMB (Cosmic Microwave Background), which is the remnant background noise of the Big Bang. They focused on perturbations, which are changes in the temperature in the CMB.

6. What they found is that the size of the disruptions has an upper limit.

7. In an infinite universe, the disruptions would be of practically any size but since they are not, this supports the version of a finite universe that closes in on itself.

8. The simulations imply a universe with the shape of a three-dimensional donut and according to Buchert, this finite universe is a better match to the unexplained mysteries of space than the infinite model.

9. The problem is that this wrapping/closing of the universe occurs beyond our observable limits (for now). Since there is no way to confirm this hypothesis with observations, astrophysicists will have to continue analyzing the Cosmic Microwave Background.

10. But even with the most astounding evidence from the CMB and the fact that the new three-dimensional donut model seems more accurate, I can’t imagine how traditionalists in physics will accept it.

• Bergan, B. (2021, July 21). Astrophysicists Say Our Universe Might Actually Be Finite. Interesting Engineering.
• Robitzski, D. (2021, July 20). Physicists Say the Universe Wraps Around Itself Like a Giant Donut. Futurism.
• Sutter, P. (2021, July 19). Our universe might be a giant three-dimensional donut, really. LiveScience.