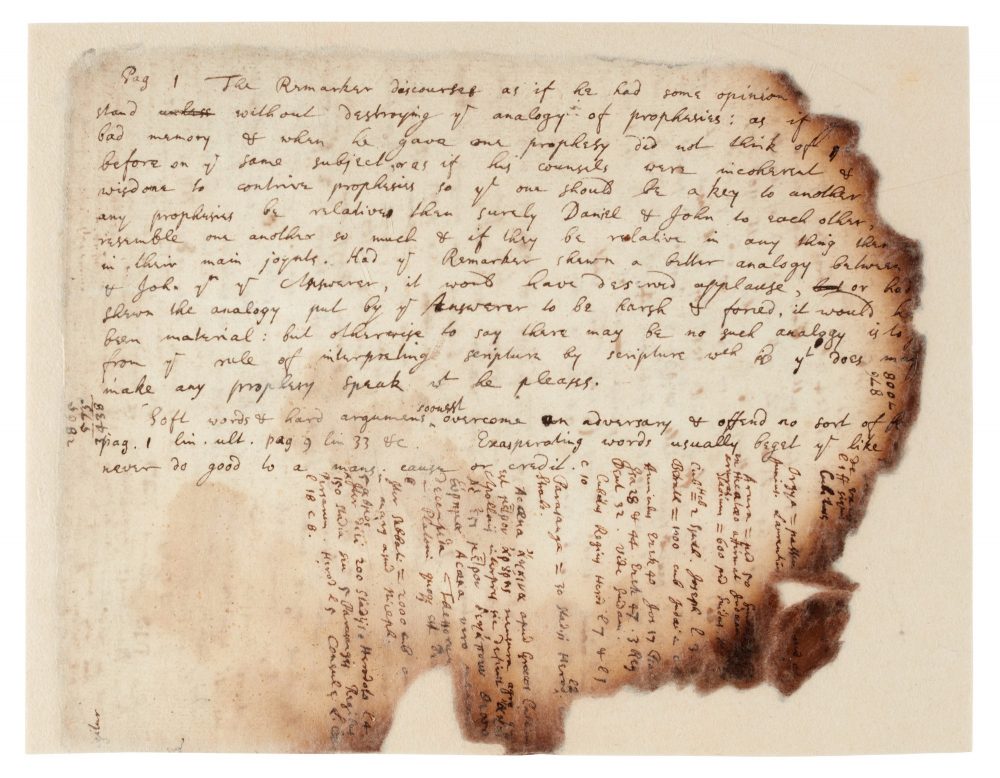 Sir Isaac Newton believed that the ancient Egyptians possessed profound knowledge that had been lost to the modern world.

Sir Isaac Newton was profoundly interested in the Great Pyramid, and a series of ancient manuscripts reveal his studies of the monument.

The Great Pyramid of Giza is without a reason of a doubt one of the most enigmatic structures built by human hands. Captivating the imagination and attention of researchers, authors, and tourists for millennia, the Great Pyramid is the most impressive monument constructed by our ancestors.

Believed to have been built during the Fourth Dynasty of Egypt, the Great Pyramid is thought to have been completed around 4,500 years ago. It is the largest, most massive pyramid in Egypt, but not anywhere close to Earth’s largest. The largest pyramid on Earth, discovered to date, is the Great Pyramid of Cholula, a massive monument buried beneath a hill located in present-day Mexico, in the district of Cholula, Puebla.

Nonetheless, despite the fact it is not the largest ever built, the Great Pyramid of Giza is a repository for secrets. Its very existence is the embodiment of the word mystery.

It has been revealed that a series of unpublished, burnt notes show that Sir Isaac Newton believed that Egypt’s pyramids held the key to the apocalypse.

The father of classical physics and the man who laid down many of the foundations for today’s science, including the laws of motion and gravity, held a profound admiration for the land of Pharaohs and the incredible monuments built millennia ago.

It was well known in the past that Sir Newton was greatly interested in alchemy and theology, something that only became obvious two centuries after his death. Now, a series of burnt documents reveal that the father of classical physics was highly interested in the Pyramids of Egypt too, and he even thought that the key to the apocalypse was embedded within Egypt’s ancient pyramids.

“These are really fascinating papers because, in them, you can see Newton trying to work out the secrets of the pyramids,” Gabriel Heaton, Sotheby’s manuscript specialist, explained in an interview with the Observer.

“It’s a wonderful confluence of bringing together Newton and these great objects from classical antiquity which have fascinated people for thousands of years. The papers take you remarkably quickly straight to the heart of a number of the deepest questions Newton was investigating,” Heaton added.

The series of unpublished notes offer insight into sir Newton’s attempts to crack the code hidden within the Bible and understand the apocalypse’s exact time and everything related to it.

The unpublished notes, sold by Sotheby’s in an auction, are three pages of Newton’s writings on the Egyptian pyramids. The damaged papers offer an unprecedented look into the mind of Sir Newton and why he believed that the Egyptian pyramids held profound secrets that could provide the answer to the apocalypse.

The notes written by Sir Newton were damaged after Newton’s hound, Diamond, jumped one night on the table, tipping over a candle, causing the notes to catch fire. Luckily, the letters are still readable.

Sir Newton studied the meaning and secret of the Egyptian pyramids back in the 1680s when he placed work aside during a period of self-imposed exile following criticism of his work, the Guardian reveals.

Specifically, Sir Newton studied the Pyramid’s construction, and he was trying to understand the unit of measurement used in ancient times to construct the Gret Pyramid. He believed that this unit was of great importance because he believed that the builders of the pyramid managed to measure our planet’s diameter by unlocking the “Great Pyramids Cubit,” Newton thought he too would be able to measure the circumference of the earth. This tells us that Sir Newton firmly believed that the Great Pyramid builders—and likely their ancestors—were remarkable scientists, engineers, and builders.

As revealed by Sotheby’s, Sir Newton believed that ancient civilizations successfully measured the Earth using techniques that were lost to modern man.

Sir Newton believed, like many other scientists and experts, that civilizations like the ancient Egyptians possessed a deep understanding and knowledge that was eventually lost to the modern world. In essence, he thought that many ancient—occult—secrets that existed millennia ago were lost throughout history.

Indeed, the Great Pyramid is a repository of scientific wonders, and evidence of its incredible precision is well attested.

I have discussed its incredible precision and many of its mathematical secrets in this article.

The Gret Pyramid was the most perfect built by the ancient Egyptians.

It is a moment composed of around 2.3 million blocks of stones.

The pyramid’s total weight has been estimated at around 6.5 million tons.

The ancient monument is a true ancient wonder; its base is level to just 2.1 centimeters (under 1 in); the average deviation of the sides from the cardinal directions is 3’6″ of arc; the most remarkable difference in the length of the sides is no more than 4.4 centimeters (1.7 in).

The Great Pyramid is also the only known eight-sided pyramid in Egypt. This curious characteristic—which not many people know of—was spotted for the first time by British Air Force pilot P. Groves in 1940 as he was flying above the Pyramid.

Why such phenomenal precision? Why such incredible accuracy? Why such a unique building?

For the Pyramid’s royal designers, such mind-boggling precision and accuracy might have been imbued with symbolic and cultic significance that now eludes us, reveals Egyptologist Mark Lehner.

Sir Isaac Newton knew that the Great Pyramid was one of the most unique monuments ever built. He hoped that the understanding of this ancient structure would help him better understand the ancient system of measurement, allowing him to reveal the architecture and dimensions of the Temple of Solomon—the setting of the apocalypse—and eventually the interpretation of hidden meanings embedded within the Bible.

“He was trying to find proof for his theory of gravitation, but in addition, the ancient Egyptians were thought to have held the secrets of alchemy that have since been lost,” explained Heaton. “Today, these seemingly disparate areas of study – but they didn’t seem that way to Newton in the 17th century.”

Although Sir Isaac Newton was a superstar scientist, a title he cemented in 1687 when he published his work Philosophiae Naturalis Principia Mathematica, Newton was very attracted—and perhaps obsessed—with alchemy and the study of unorthodox subjects of the time.

The ancient manuscripts auctioned by Sotheby’s are a treasure trove of history and prove that science and alternative science can go hand to hand.

Sources and references: The Guardian / Sotheby’s /