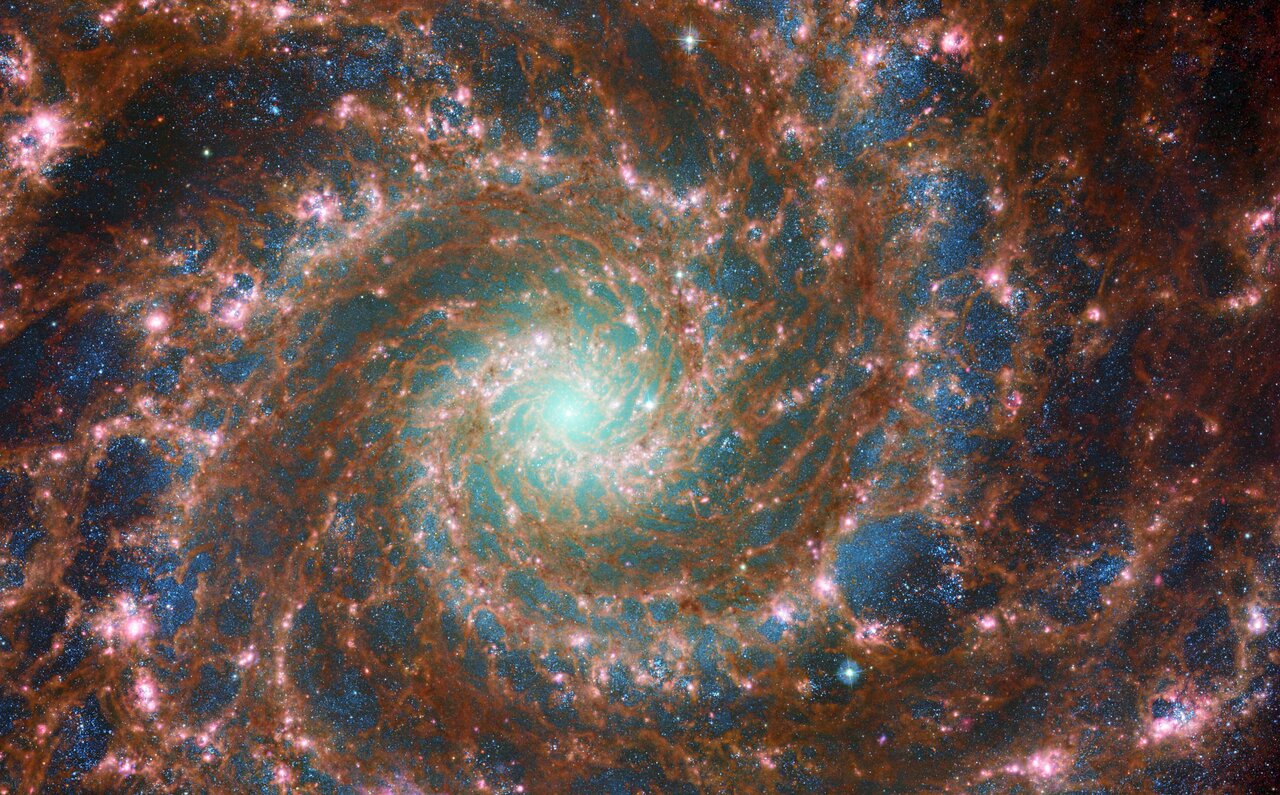 Astronomical objects can be better understood when data from telescopes operating across the electromagnetic spectrum is combined. Hence, Hubble and Webb's data complement each other to provide a comprehensive view of M74.

The James Webb Space Telescope continues gathering unprecedented data on galaxies and stars located far away from Earth. The space observatory has been revealing the wonders of the cosmos for months, gathering scientific data of the utmost importance. Now, scientists revealed more of its magic. In a new NASA/ESA image, the James Webb space telescope reveals stunning details of a previously unknown slice of the cosmos 32 million light-years away.

As a result of the infrared technology of the telescope, launched in December 2021, astronomers now have a clearer view of the so-called Phantom Galaxy than they ever had before. In the grandiose spiral arms that wind outward from the center of this image, Webb’s sharp vision has revealed delicate filaments of gas and dust, said NASA and the ESA on Monday.

It also allows an unobstructed view of the nuclear star cluster at the galaxy’s center because of the lack of gas. Located 32 million light-years distant from Earth, the whirling celestial form is officially called M74. A bright, blue center swirls around a cloud of white, red, and pink dust, set against the dark background of deep space in this image from the Webb telescope. A previous Hubble image captured the spiraling blue and pink arms of M74, but its glowing center appeared yellow instead.

NASA and the ESA described the Phantom Galaxy as one of their favorite targets for studying galactic spirals. Using the picture taken by Webb, scientists will be able to find out more about 19 star-forming galaxies around our own Milky Way galaxy, as well as learn more about the earliest phases of star formation in the local universe.

As well as identifying star-forming regions in galaxies, it will help astronomers determine the masses and ages of star clusters, as well as learn more about the small dust grains drifting in interstellar space, according to the statement. New images from the Webb telescope have thrilled the space community as the telescope orbits the Sun in a region of space called the second Lagrange point, a million miles (1.6 million kilometers) away from Earth.

Its primary mirror measures more than 21 feet (6.5 meters) across and is a joint effort between NASA, ESA, and the Canadian Space Agency. Although it should operate for approximately 20 years, there is a good chance that it will continue to operate for much longer.