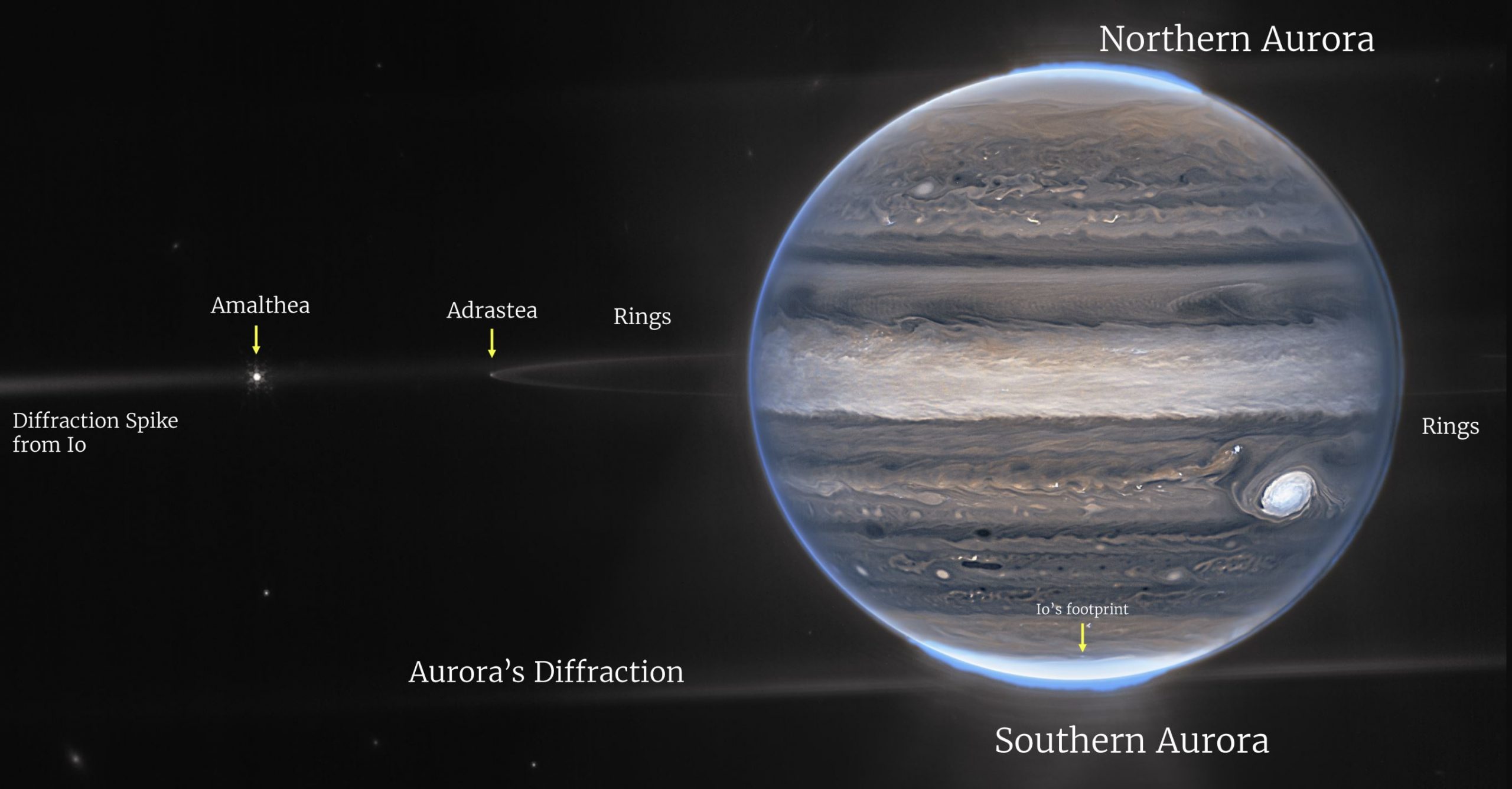 These are probably one of the most amazing photographs of Jupiter to date.

The James Webb Space Telescope continues to produce mind-boggling images of space. This time, instead of looking into the past, the space telescope turned to our cosmic neighborhood, turning its expensive, state-of-the-art cameras toward the largest planet in our solar system, Jupiter.

There are many things going on on Jupiter, from giant storms to powerful winds to auroras.

Although several missions have studied Jupiter and its moons up close, using the latest telescope at our disposal isn’t a terrible idea to try and find out more.

That is precisely what NASA’s James Webb Space Telescope did.

Jupiter’s inner life will be revealed even further by Webb’s observations.

The upper right quadrant of the image shows Jupiter in a wide field view. Colors such as blues, browns, and cream are used to render the planet’s swirling horizontal stripes. Polar auroras glow electric blue above Jupiter’s north and south poles. There is a white glow emanating from the auroras.

Due to the amount of sunlight reflecting from the clouds, the Great Red Spot appears white in these views.

An equatorial ring glows faintly white along the planet’s equator. Compared to the planet itself, these rings are a million times fainter. An image of one of the Jovian moon appears at the left edge of the rings as a tiny white dot. The diameter of this moon is only about 12 miles (20 km). On the left is another moon, about 100 miles (150 km) across, which is dotted with tiny white diffraction spikes. There are faintly glowing white galaxies in the distance, but the rest of the image is black.

Two images were taken with the observatory’s Near-Infrared Camera (NIRCam), which employs three infrared filters to reveal details on the planet. Because infrared light cannot be seen by humans, it has been translated into visible light.

The brightness indicates high altitude, so both the Great Red Spot and the equatorial region have hazes associated with high altitude,” explained Heidi Hammel, the Webb interdisciplinary scientist for solar system observations.

Observations from telescopes like Webb don’t come to Earth neatly packaged. The raw data contains information about Webb’s detector brightness. The science operations center for Webb, STScI, receives these raw data. A calibration file is prepared by STScI and distributed to the Mikulski Archive for Space Telescopes so they can be analyzed scientifically.