A pair of Japenese robots have photographed stunning images of the surface of an asteroid after successfully having been released from the Hayabusa2 probe the Japanese Space Agency has revealed.

The images were taken on the surface of asteroid Ryugu, located some 180 million miles away.

The rovers–tiny tin-shaped robots–belong to the Japan Aerospace Exploration Agency and were released from the Hayabusa 2 probe. 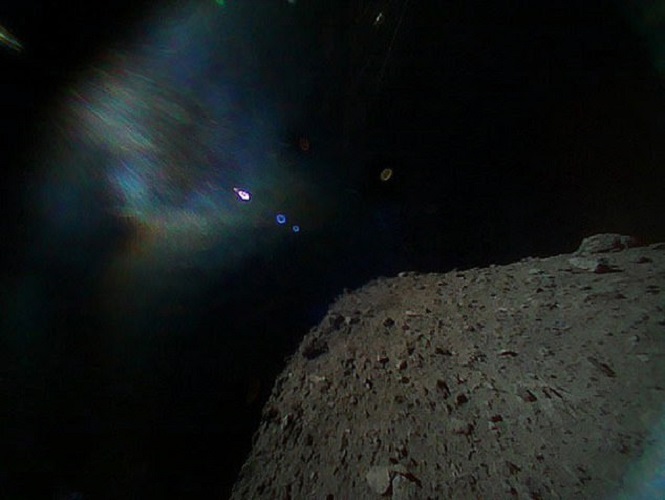 Image from the surface of Asteroid Ryugu, photographed by rovers of the Japanese Space Agency. Image Credit: JAXA“Each of the rovers is operating normally and has started surveying Ryugu’s surface,” JAXA said in a statement.

The newly released images show the craggy surface of the mysterious Ryugu asteroid in great depth, taking into consideration the images traveled more than 180 million miles.

The two tin-shaped rovers are used by the Japanese Space agency in order to search for clues of the origin of our solar system.

According to the agency, the rover mission is the worlds first moving, robotic observation on the surface of an asteroid.

‘Each of the rovers is operating normally and has started surveying Ryugu’s surface,’ JAXA said in a statement.

JAXA mission scientists will take advantage of the low gravity on the surface of Ryugu and have their rovers jump around the surface, performing scientific experiments.

According to reports, the miniature robots will soar as high as 15 meters above the surface and be able to stay suspended in the air up to fifteen minutes in order to gather necessary scientific data about the asteroid.

JAXA project manager Yuichi Tsuda spoke about the feeling of having successfully landed on the surface of the asteroid:

“I am so proud that we have established a new method of space exploration for small celestial bodies.”

This is the agencies first successful mission.

In 2005, JAXA tried landing a rover on another asteroid but failed.

Now, after having robots on the surface, JAXA will study as much as it can from the asteroid.

According to JAXA, Hayabusa2 will deploy an “impactor” that will explode above the asteroid next month.

It will shoot a two-kilo copper missile in order to blast a small crater into the surface.

One the crater forms, the probe will proceed and collect “fresh” materials that have been unexposed to millennia of wind and radiation. Scientists are hoping for answers to some of the fundamental questions about life, our solar system, and the universe, including even answering one of the most important questions asked by scientists for decades: whether elements from space helped give rise to life on Earth.

After collecting samples, the Hayabusa2 probe will return to Earth with fresh samples in 2020.

Will 500-Meter-Wide Asteroid Bennu Collide with Earth and Wipeout Mankind?

Here’s An Image of an Asteroid With its Own Moon, 5.2 Million km Away