Organic material in a mineralized form has been discovered embedded in a Martian meteorite found in the late seventies.

ALH-77005 is a Martian meteorite discovered in the 1970s in Antarctica.

While it may seem like just another space rock that impacted Earth, it contains numerous mineralized ‘biosignatures,’ including coccoidal, filamentous structures and organic material, according to a team of scientists from Hungary.

And this is actually huge news.

Mars has been giving us a lot to talk about.

In recent months we’ve found out amazing things about the red planet.

Recent research has hinted at the possibility that there may be life right now on Mars after experts identified mysterious objects (fungi) that may be growing out of the Martian soil.

We also confirmed the red planet was home to vast oceans, and massive rivers, among other things.

And the Martian meteorite fragment, ALH-77005 may help us understand the chances of life originating on Mars. The enigmatic space rock was discovered partially embedded into the ice at the Allan Hills site (in South Victoria Land) by a Japanese Institute of Polar research expedition in 1977-1978.

“Our work is important to a broad audience because it integrates planetary, earth, biological, chemical, and environmental sciences and will be of interest to many researchers in those fields,” explained in a statement the authors leading scientists Dr. Ildiko Gyollai, a researcher at the HAS Research Centre for Astronomy and Earth Sciences in Budapest.

“The research will also be of interest to planetologists, experts of meteorite and astrobiology as well as researchers of the origin of life, and to the general public since it offers an example of a novel aspect of microbial mediation in stone meteorites,” Dr. Gyollai adds.

ALH-77005 is estimated to be around 175 million years old, and scientists found it had an exposure to cosmic rays of about 3 million years.

“The other signatures for biogenicity of ALH-77005 are strong negative δ13C, enrichment of iron, manganese, phosphorus, zinc in shock melt support scenario,” the researchers said.

“Our study proposes the presence of microbial mediation on Mars.”

The new study was published in the journal Open Astronomy.

Via
Open Astronomy
Get our content delivered to your email. Don't worry, we don't send spam.
New on Curiosmos
Categories 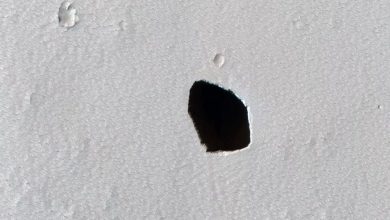 Inside Mars: Take a Peek Into Martian Pits in Stunning New Images From the Red Planet

This is Opportunity’s Last 360 Panorama Image of Mars, and it Reveals Fascinating Features

Coronavirus Causes Europe and Russia to Delay ExoMars Mission Until 2022