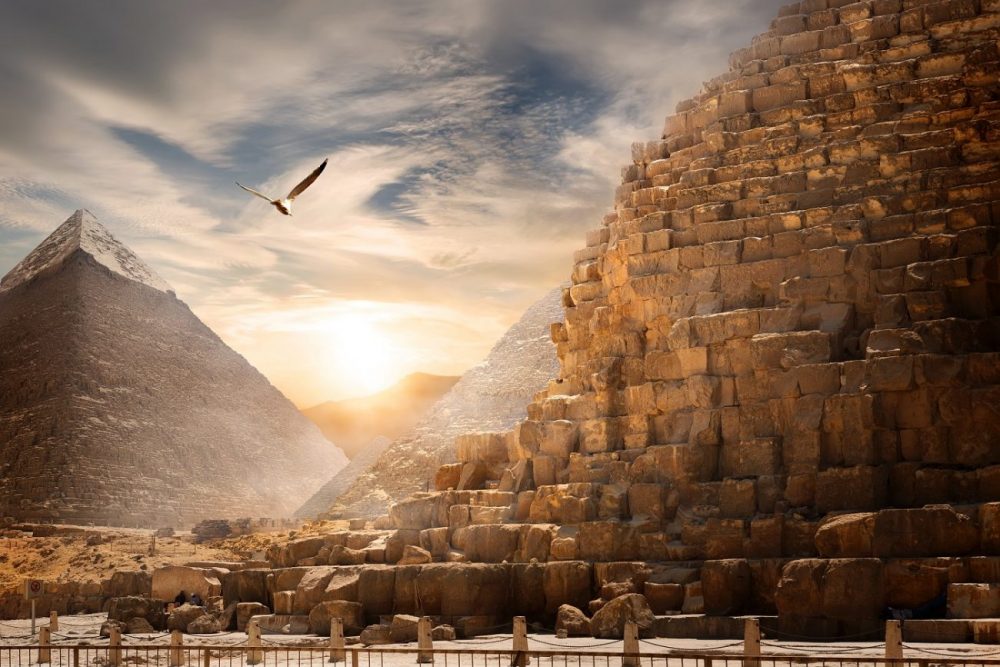 Archeologists have discovered the remains of a Pyramid Builder Town at the footsteps of the Great Pyramid of Giza. The town is thought to have been used as an ancient port.

During a new documentary series archeologists have revealed the existence of a long-lost town’ that once stood proud just next to the Pyramids of the Giza Plateau.

The worker town, reveal archeologists, was most likely used as an ancient port, where the massive blocks of stones were transported to, after the journey up the River Nile from their quarries.

One of the most fascinating monuments ever built by human hands is the Great Pyramid of Giza.

A building unlike any other

Standing tall and proud after more than 4,500 years, this majestic structure has withstood natural disasters, wars, and practically anything else ‘thrown at it’.

though to have been built in a period of around 20 years, archeologists have still not managed to understand the entire process that involved building a structure of such magnitude.

How were the blocks quarried, how were they transported? Did the ancient Egyptians use the Nile River to move the massive blocks? And how did they place them into position? Were the workers paid? Or did the ancient rulers use slave labor? And why is it that we don’t have almost any documents describing how the structure was built?

We only have an ancient papyrus, believed to have been penned down by a man called Merer which details how he oversaw a team of 40 people that were tasked with moving the massive stone blocks along the river Nile.

Too many questions remain unanswered.

How was it built?

Since ancient texts describing the building process are lacking, we need to dig into the sands of Egypt to look for clues on how the ancient Egyptians did it.

And it seems that a discovery made at the bank of the River Nile may confirm archeological theories on how this ancient civilization managed to transport the supermassive blocks of stone to the building site, eventually constructing a pyramid with a volume of 2,583,283 cubic meters.

Not only that, but experts estimate that as many as 5.5 million tons of limestone, 8,000 tons of granite (imported from Aswan), and 500,000 tons of mortar were used in the construction of the Great Pyramid.

A discovery at the footsteps of the pyramid

During Channel 4’s series ‘Egypt Great Pyramid: The New Evidence‘, archeologist Mark Lehner reveals a discovery made by his team at the footsteps of the pyramid. There, the researchers uncovered the ancient remains of a long-lost town that they say was once used as an ancient Egyptian port.

Lehner believes that it was precisely there where Mere, the man that oversaw a small part of the construction process stood, more than 4,500 years ago.

“We are on the spot where Merer and his men stayed overnight,” revealed Lehner in the Channel 4 documentary.

“We put a grid over the whole place in order to map it and then we can decide where to excavate down to the floor level to the houses and places where they lived,” he revealed.

Archeological excavations revealed the entire layout of the small town where the ancient pyramid builders are thought to have lived for a time.

During the documentary, Lehner can be seen lying on the floor in what he believes may have been an ancient Egyptian bed.

“You come into the main living area now, opening off this same central room, you also have his bedroom. This is a rather substantial sleeping platform – as we call them,” the archaeologist explained.

“It’s just about the right length, you know, for an official of moderate height like myself – to stretch out,” added Lehner.