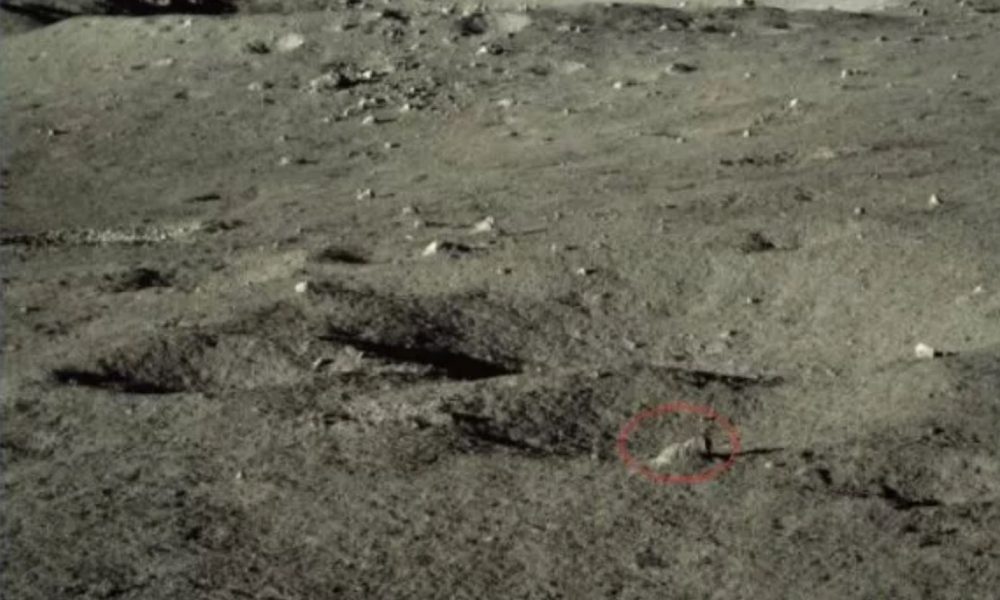 A series of mysterious lunar rocks have been spotted by the Chinese Rover exploring the far side of the moon.

Not only has the Chinese lunar mission sent back a plethora of previously unknown data about the far side, but it has also snapped countless images that have allowed us to take an unprecedented peek at the lunar far side.

During its mission, the Yutu-2 rover has encountered quite a few mysteries.

Not long ago we reported about a strange gel-like substance that the rover found while exploring a crater on the far side of the moon.

Now, it seems the rover has encountered another lunar anomaly: a strange rock, or better said a series of strange rocks.

On the 13th lunar day of the Chang’e-4 mission, the rover photographed rocks that look brighter than the rest of the surrounding terrain, according to a statement issued by the Chinese government-sanctioned publication Our Space.

The lunar rocks, which are very different from those studied so far by experts could round the perspective of the geological history and evolution of the explored area, the Von Kármán crater.

A closer inspection of the rocks by the rover revealed unusual erosion which is believed to be caused by micrometeorites and large temperature changes between the long days and lunar nights.

The anomaly suggests that the fragments are relatively young since over time the rocks tend to erode in soil.

The strange brightness of the rocks also indicates that perhaps they originated in an area very different from the one being currently explored by the Chinese rover.

The Chang’e 4 mission has proven that our Moon holds many secrets that are still waiting to be revealed and studied up close.

The better understanding of the history of the Moon, its geological characteristics and the recently revealed “unique features” on the lunar far side will help us colonize the moon in the near future, opening a direct path to the exploration of the rest of the solar system.

The Chang’e-4 mission made history when, in January of 2019, it successfully performed a soft landing on the far side of the moon, in a large lunar impact crater called Von Kármán. This impact crater is nearly 180 kilometers in diameter, and lies within an immense impact crater known as the South Pole–Aitken basin of roughly 2,500 km (1,600 mi) in diameter and 13 km (8.1 mi) deep.

Lava has flowed into it multiple times since its formation, leaving its surface relatively even and dark.

Dan Moriarty a researcher at NASA’s Goddard Space Center in Maryland says that the size, shape, and color of the lunar rocks spotted by Yutu-2 provide clues to their origins.

“Because [the rocks] all look fairly similar in size and shape, it is reasonable to guess that they might all be related,” he revealed while speaking to Space.com.

“Chang’e-4 landed on a volcanic mare, [a] basalt patch, and those volcanic materials are much darker than normal lunar highlands crust. If these rocks are indeed brighter than the soil, it could mean that they are made up of a higher component of bright, highlands crust materials than the surrounding volcanic-rich soils.”

Moriarty explains that the lunar rocks spotted by Yutu-2 are probably relatively young, which means that they formed after major resurfacing events at the Von Kármán crater.

“So that could be 10-100 million years [ago] or 1-2 billion years. It’s really hard to say definitively,” he revealed to Space.com.