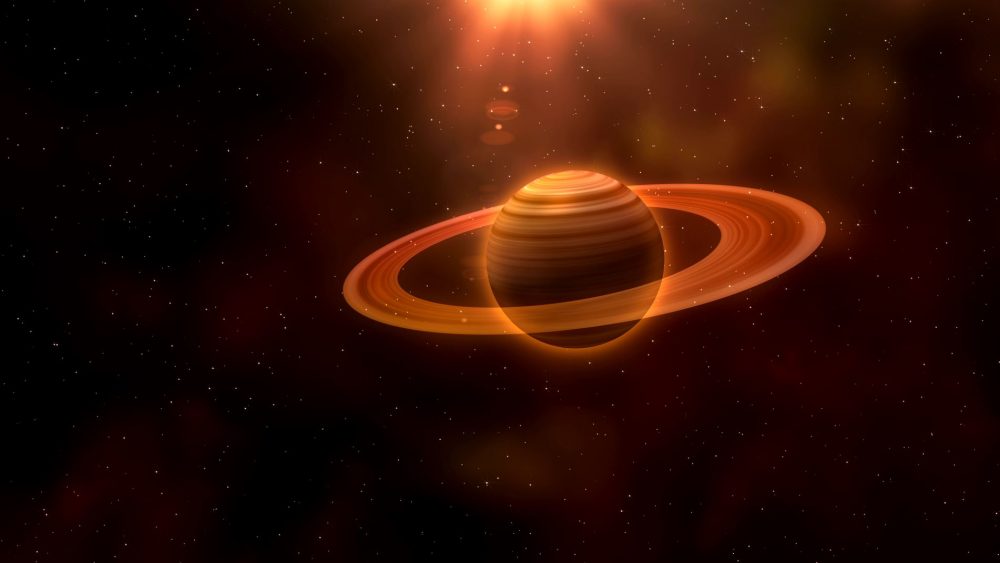 Billions of years ago, Mars likely had a massive ring around it, similar, albeit much smaller if compared to Saturn.

Our neighboring planet Mars, which we hope to visit one day soon with crewed space missions, continues to amaze us. It has now been revealed that Mars likely had predominant rings surrounding it millions of years ago, and evidence of that is Mars’ moon Deimos.

Scientists from the SETI Institute and Purdue University have discovered that the only way to produce the unusually tilted orbit of the moon Deimos orbiting Mars is for the Red Planet to have had a ring billions of years ago.

While some of the most massive planets in our solar system have giant rings and many large moons, Mars has only two small, warped moons called Phobos and Deimos.

Although these moons are small, their peculiar orbits hide important secrets about their past. For example, scientists long believed that the two moons orbiting Mars, discovered in 1877, were captured asteroids.

The theory goes like this. Millions of years ago, asteroids were traveling through space but got too close for comfort. Eventually, the Martian gravity captured them, enough not to make them crash but remain in orbit around the plant.

But was this what happened?

Since their orbits are almost on the same plane as the equator of Mars, the moons must have formed simultaneously as Mars. But the orbit of the smallest and most distant moon, Deimos, is tilted by two degrees.

Deimos’s orbit is not exactly in the plane with the equator of Mar, and this was not considered important, and no one cared to try to explain it, revealed lead author Matija Cuk, a research scientist at the SETI Institute.

“But once we had a great new idea and looked at it with new eyes, Deimos’ orbital tilt revealed his great secret,” Cuk explained.

This new idea was introduced in 2017 by Cuk’s co-author David Minton, a professor at Purdue University, and his then-graduate student Andrew Hesselbrock. They noted that the inner moon of Mars, Phobos, is losing altitude as its small gravity interacts with the impending Martian globe.

Soon, astronomically speaking, Phobos ‘orbit will drop too low, and Mars’ gravity will shatter it to pieces producing a ring around the planet. Hesselbrock and Minton proposed that for billions of years, generations of Martian moons were destroyed in rings. Each time, the ring would give rise to a new, smaller moon to repeat the cycle.

This cyclical theory of the Martian moon has a crucial element that makes the Deimos tilt possible: a newborn moon would move away from the ring and Mars, which is opposite to the inner spiral that Phobos experiences due to gravitational interactions with Mars.

A moon that migrates outward, just outside the rings, may encounter a so-called orbital resonance, in which Deimos’ orbital period is three times greater than that of the other moon.

These orbital resonances are demanding but predictable about the direction in which they intersect. Therefore, we can say that only an outward-moving moon could have strongly affected Deimos, which means that Mars must have had a ring that pushes the inner moon out.

Cuk and his collaborators deduce that this moon could have been 20 times more massive than Phobos and could have been its “grandmother” existing just over 3 Billion years ago, followed by two more ring-moon cycles, Phobos being the last moon.

The tilt of Mars’ moon and its orbit have significant consequences for our understanding of Mars and its system. The discovery of past orbital resonance almost confirms the ring-moon cyclical theory for Mars.

It implies that for much of its history, Mars had a prominent ring.

While Deimos is billions of years old, Cuk and his collaborators believe that Phobos is young as astronomical objects advance, forming perhaps just 200 million years ago, just in time when dinosaurs roamed the Earth.

These theories can undergo some serious testing in a few years, as the Japanese space agency JAXA plans to send a spacecraft to Phobos in 2024, which would collect samples from the moon’s surface and return them to Earth.

Cuk is hopeful that this will give us firm answers about the long history of the Martian moons: “I do theoretical calculations for a living, and they are good, but having them tested in the real world once in a while is even better,” he explained in a statement.