Mars is home to countless mysteries.

One such mystery is not on the ground, but rather above one of Mars’ largest volcanoes.

There’s a massive ‘smoke plume’ on Mars, around 1,500 kilometers in length causing confusion among experts.

The mysterious white plume detected in September near the volcano Arsia Mons has attracted scientific attention because two months after its discovery, it is still there.

Unlike other Martian cloud structures (yeah Mar has clouds)  that seem to disappear and appear over time, this massive plume seems to be quite persistent.

The plume was unveiled on September 13 and remains in images from Mars taken in November, according to the European Space Agency.

The agency’s Mars Express camera has been recording images and observing the plume up close.

“Montane clouds are very common on Mars, but it was the length of the cloud and its duration that makes it interesting,” said Francois Forget, a senior research scientist at the National Center for Scientific Research (CNRS) in Paris.

“Usually, it is more localized to the volcano.”

And while the cloud exists near the volcano, it wasn’t caused by it.

Forget and his colleagues have ruled out volcanic discharge as  Arsia Mons has been inactive for at least 10 million years, and its maximum activity occurred about 150 million years ago.

At 20,000 meters altitude, Arsia Mons is the southernmost volcano of a group of three ancient volcanoes located on an elevated plateau known as the Tharsis region on Mars.

Experts say that the plume is an orographic or lee cloud, formed thanks to a number of factors that are common on Earth, and on Mars as well.

“The dust storms create darkened conditions and reduced heat at the planet surface and increased absorption of solar radiation and heating by the dust particles high in the atmosphere,” Forget explained.

“Just like tropical air on Earth, when this unusually warm air encounters a topographic feature such as a mountain or ancient volcano such as Arsia Mons, disturbance in the air parcel is created as it is forced upward and over the volcano to an even higher elevation.”

Water Ice Discovered in the Subsoil Near Mars’ Equator 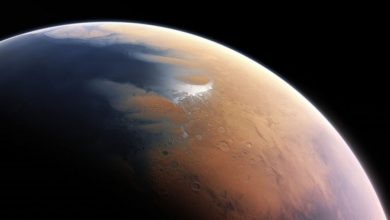 NASA’s Mars Orbiter Spies Dragon on the Surface of Mars