Holy shark! While exploring an underground cave in Kentucky, researchers have come across the remains of a massive, 300-million-year-old shark skull.

Although the discovery of the ancient shark skull is one of the most important discoveries made inside the cave system, it isn’t the first. Previous explorations of the cave system have revealed plenty of evidence of ancient shark activity. In fact, as noted b the Mammoth Cave National Park, more than one hundred species of sharks have already been identified inside the cave.

Most of this evidence originates from teeth, which remain well preserved over great periods thanks to their composition: calcium phosphate.

While the discovery of teeth belonging to ancient species of shark is incredible, finding a skull is a Eureka moment. This is because the skeletons of sharks are composed of cartilage and not bone.

Analysis of the remains points to the possibility that the newly discovered skull belongs to a long-extinct shark species known as Saivodus striatus. This species of shark is believed to have grown to the size of a modern-day Great White, between 3.4 to 4 meters (11 to 13 feet) in length.

In a Facebook post, researchers from the Mammoth Cave National Park praised the discovery of the fossil.

“The preservation of these shark fossils is superb,” the researchers wrote.

“Because the cave is not exposed to external elements such as rain, snow, and wind, the rate of erosion of the limestone in the cave is slow so fossils tend to be very detailed and mostly intact.”

It is believed that the vast cave system in Kentucky was inhabited some 330 million years ago during the Late Mississippian period by several species of now-extinct sharks. During this time, much of the Mississippi River valley was actually located underwater, from around 358.9 to approximately 323.2 million years ago.

This is why it isn’t surprising to find a lot of marine fossils in the area, despite the fact that today, the region is located around 850 kilometers from the coastline.

Sharks are some of the oldest living creatures on Earth. Scientists have found evidence of sharks living on Earth for at least 450 million years. This means these aquatic creatures are older than the dinosaurs. 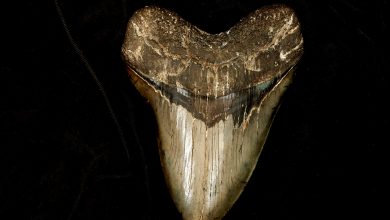 Unexpected: Scientists Find the Fossil of a 91-Million-Year-Old Shark in Kansas

Hold my Coffee, The US Navy is Officially Building a High-Tech UFO