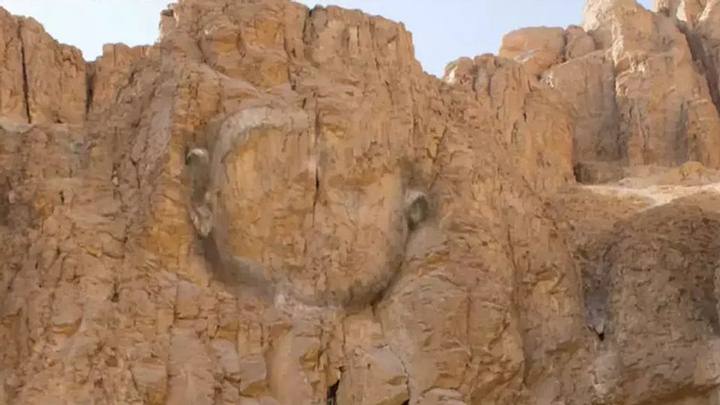 A group of archaeologists discovered a massive face carved onto the mountainside at the Theban Necropolis. The gigantic face is reminiscent of the face carved on the Great Sphinx of Giza.

Archaeologists have discovered a massive face carved into the rock reminiscent of the Great Sphinx in Giza. The gigantic face which looked over the royal necropolis in ancient times was found to “light up” during the solstices.

At the center of the Theban Necropolis remain many hidden secrets of the ancient world. In 1881, archaeologists stumbled across tomb TT 320, with over 40 mummies of well-known ancient Egyptian pharaohs such as Ramses II, Seti I, and ThutmoseIII.

Archaeologists have made another fascinating discovery: these mummies were all guarded by a massive statue carved into the mountainside. Although badly destroyed, researchers have identified part of the temple, the arch of the eyebrow, and even the hollow of the nose, all with exact proportions.

The discovery was documented by a mission of Spanish archaeologists from the Complutense University of Madrid (UCM) in collaboration with the Ancient Egyptian Documentation Center of the Egyptian Ministry of Antiquities (CEDAE).

Called the Royal Cache Wadi Survey (or C2 Project), the mission identified a high number of writings on the rocks at the site, mummified animals, offerings, an unexplored tomb, and this 20-meter-high effigy that absolutely nothing was known about until now.

“It appears to represent a wigged face, perhaps similar to that of the goddess Hathor, daughter of the Sun god Ra. And although it is not exactly a Sšhinx because it does not have the body of an animal, it would occupy the same guardian role as the Sphinx in Giza“, explains the Egyptologist José Ramón Pérez-Aquino, professor of Ancient History at the UCM and co-director of the C2 Project.

Archaeologists believe that the face carved onto the mountainside was not in ruins due to erosion, but was intentionally disfigured.

In the late antiquity (4th, 5th, and 6th centuries) the area was highly Christianized and the old temples became monasteries.

In that context, the carved face could have been seen as something too big and incompatible with the Christian religion reveal Egyptologists.

In the same way, those responsible for the destruction could have been Muslims, since the Islamization of the area occurred in the year 637 AD.

Another interesting detail is that the guardian’s face lights up during the solstice, which was verified by archaeologist Pérez-Accino on December 21, when the archaeological campaign was already concluding.