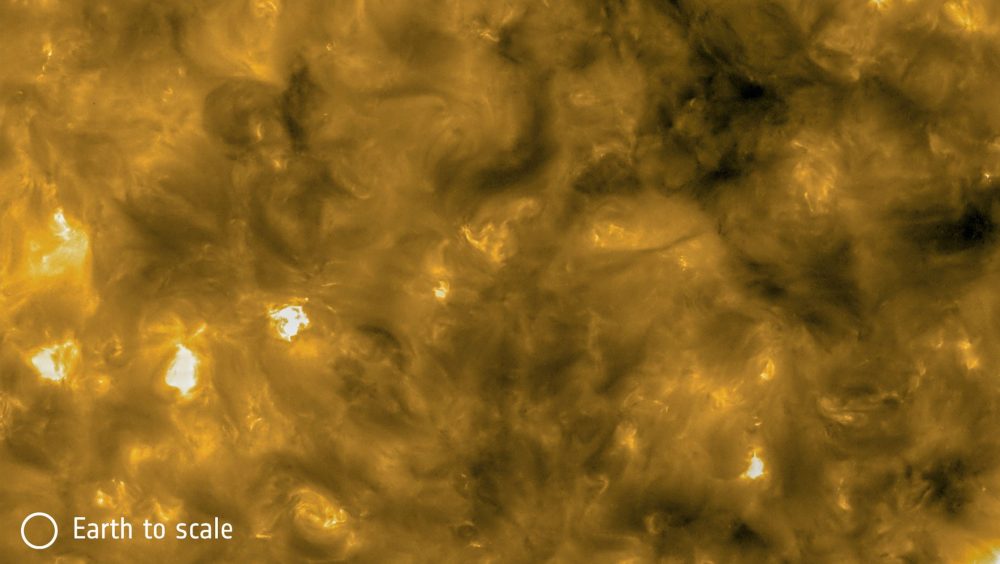 Not only did the Solar Orbiter photograph never-before-seen close-up images of the Sun's surface, but the spacecraft also discovered mysterious solar surface details dubbed as "campfires."

The unique aspect of the Solar Orbiter mission is that no other spacecraft has been able to take images of the Sun’s surface from a closer distance.

The recently published images were taken at a distance of 77 million kilometers from the Sun’s surface, which is the closest a camera has ever gotten near the Sun.

The images, obtained by the Solar Orbiter probe, revealed multiple solar mini-eruptions, described as “campfires,” on the surface of our star.

At a distance of 77 million kilometers from the surface, ESA’s Solar Orbiter spacecraft has snapped its first images of the Sun. This is the closest a camera has ever own near the Sun. The mind-boggling images reveal features on the Sun’s surface that have never before been observed in such great detail. Ultimately, the Solar Orbiter will get as close as 42 million km to the Sun, which is almost a quarter of the distance from Sun to Earth.

The Solar Orbiter is an international collaboration between ESA and NASA to study the Sun. It was launched on February 9, 2020, and completed its first near-star move in mid-June.

“These unprecedented images of the Sun are the closest ever obtained,” said Holly Gilbert, project scientist for the mission at NASA’s Goddard Space Center in Greenbelt, Maryland.

“These amazing images will help scientists study the different atmospheric layers of the Sun, which is important in understanding how space weather works near Earth and through the solar system.”

“We did not expect such results so soon,” added Daniel Müeller of ESA. “It is an excellent start for the Solar Orbiter.”

As revealed by the European Space Agency, the spacecraft is currently in its cruise phase, on its way to Venus, but will ultimately get even closer to the Sun, which will allow it to take even more detailed images of our home star.

However, reaching this point was not an easy task.

The coronavirus pandemic forced mission control at the Operations Center of the European Space Agency (ESOC) in Darmstadt, Germany, to shut down completely for more than a week.

During the commissioning phase (the period of time when each instrument is tested), the ESOC staff was reduced to the basics and indispensable, with essential staff working from home.

Nonetheless, the team adapted, even preparing for the unexpected encounter between the orbiter and comet and ATLAS dust and ion tails in early June.

The spacecraft completed its commission just in time for its first pass close to the Sun, flying over the star some 77 million kilometers with all its instruments activated to take the images are shown in this article.

The Solar Orbiter carries six imagery instruments, each to study a different aspect of the Sun.

Normally, the first images are to confirm that everything is working correctly, so scientists did not expect new discoveries this time.

However, the ultraviolet instrument (EUI) sent data showing solar characteristics never before observed in such detail.

Lead researcher David Berghmans, an astrophysicist at the Royal Belgian Observatory in Brussels, points to what he calls “campfires” distributed on the surface of the Sun.

“The campfires are little relatives of the solar flares that we can observe from Earth, a million or billion times smaller,” said Berghmans.

“The Sun might look quiet at first glance, but when we look in detail, we can see those miniature flares everywhere we look.”

It is not yet clear what these “campfires” are or how they correspond to the solar illuminations observed by other missions.

One possible explanation is that they are mini-explosions: in theory, tiny but ubiquitous “sparks” that would help heat the Sun’s outer atmosphere, or corona, to its temperature 300 times higher than that of the solar surface.

“These campfires are totally insignificant each by themselves, but summing up their effect all over the Sun, they might be the dominant contribution to the heating of the solar corona,” reveals Frédéric Auchère, of the Institut d’Astrophysique Spatiale (IAS), France, Co-Principal Investigator of EUI.

To know this for sure, scientists need more precise measurements of the temperatures of these campfires, and fortunately, the Solar Orbiter has an instrument to do that, SPICE (Spectral Imaging of the Coronal Environment).

Images obtained by Solar Orbiter’s other instruments also showed promise. For example, the SoloHI (Solar and Heliospheric Imager) instrument revealed so-called “zodiacal light” (sunlight reflected in interplanetary dust), a light that is so dim that the bright face of the Sun normally obscures it. To see it, SoloHI reduced sunlight to one trillionth of its original brightness.

Tests of the PHI instrument (Polar and Helioseismic Imager) were also successful. PHI maps the solar magnetic field, with a special focus on the poles. Later in the mission, when the Solar Orbiter gradually tilts to a 24-degree orbit above the plane of the planets, this instrument will have its glory day by obtaining unprecedented views of the Sun’s poles.