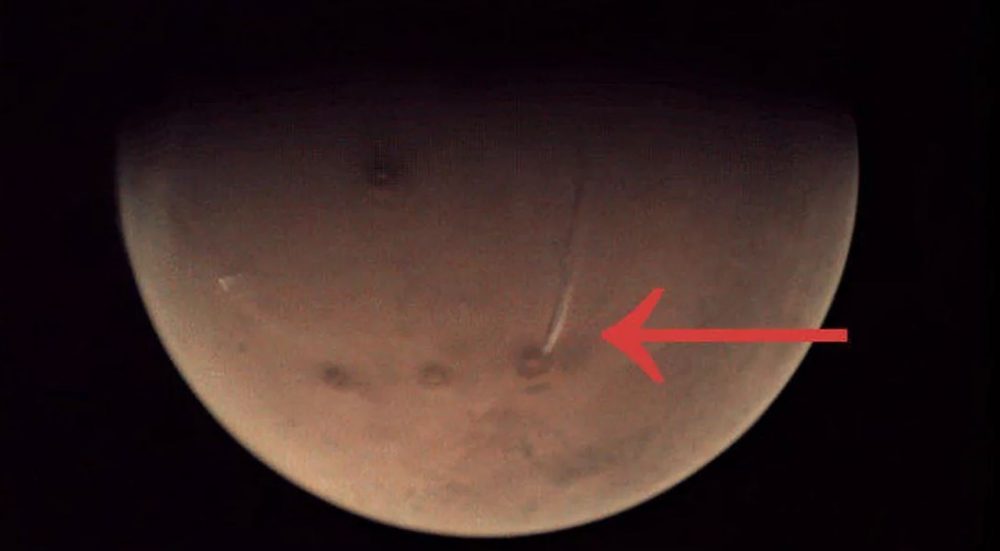 The oddly shaped plume is a unique phenomenon that appears above Arsia Mons, the southernmost of three volcanoes (collectively known as Tharsis Montes) on the Tharsis bulge near the equator of the planet Mars.

Scientists have spotted the mysterious elongated plume above Mars’ Arsia Mons volcano reappear and say it is not created by volcanic activity on Mars.

A mysteriously long and thin cloud has appeared again over the 20,000-meter-high Arsia Mons volcano on Mars.

A recurring feature, the cloud is made up of water ice, but despite appearances, it is not a plume linked to volcanic activity.

Instead, it is formed as the airflow is influenced by the leeward slope of the volcano, the side that does not face the wind.

These new images of the cloud, which can reach up to 1,800 km in length, were taken on July 17 and 19 by the Visual Monitoring Camera (VMC) aboard ESA’s Mars Express orbiter, which has been studying the Red Planet from orbit for the past 16 years.

“We have been investigating this intriguing phenomenon and expected to see a cloud of this type at this time,” explains Jorge Hernández-Bernal, a doctoral candidate at the University of the Basque Country (Spain) and lead author of the ongoing study, in a statement.

“This elongated cloud forms every martian year during this season around the southern solstice, and repeats for 80 days or even more, following a rapid daily cycle. However, we don’t know yet if the clouds are always quite this impressive.”

The first time the odd feature was made popular by the media was back in October 2018, when some people even ventured out to suggest that Mars was volcanically active and that the oddly shaped plume was the result of volcanic activity.

However, the red planet hasn’t been volcanically active for around 500 million years.

In 2018, when the news of the “oddly-shaped cloud” went viral, Dr. Tanya Harrison from NASA explained that the odd feature was not a plume of smoke, but rather water ice clouds condensing out over the summit of the Arsia Mons volcano. In fact, Dr. Harrison even explained that such clouds are popular over this particular volcano.

And the recent image shared by the Mars Express orbiter proves that the oddly-shaped cloud is indeed a popular phenomenon in that particular region on Mars.

A Martian day, or Sol, is slightly longer than an Earth day at 24 hours, 39 minutes, and 35 seconds long.

A year on the red planet consists of 668 soles, approximately 687 days, so the seasons last twice as long.

The southern solstice is the period of the year when the Sun is in the southernmost position of the Martian skies, just like December 21 on Earth.

In the early morning hours during this period, this fleeting cloud grows for approximately three hours and quickly disappears a few hours later.

Most spacecraft in orbit around the Red Planet tend to watch in the afternoon; however, Mars Express is in a prime position to gather and provide crucial information about this unique effect, enabling to snap unprecedented images of the mysterious clouds.

Note that plumes on Mars have been found in different areas in the past.