Is E.T. trying to get in touch with Earth? Or is it possible that a mysterious, still unexplained phenomenon is causing these mysterious signals? Scientists still don’t have an exact answer.

Referred to as Fast radio bursts or FRB’s, the rare radio emissions tend to appear randomly over time, which makes them extremely difficult to spot and study.

According to experts, the latest FRB comes from a distant galaxy located around 1.5 billion light-years away from Earth.

What causes them remains a cosmic mystery.

While it may not be aliens, scientists have failed to explain their cause and origin.

Among the leading theories are Black Holes, Super-dense Neutron Stars, and of course aliens.

Suggesting that FRBs are the product of Alien civilizations may sound outlandish to some, but as we have failed to come to the bottom of what causes them, some scientists have remained open-minded.

One such scientist is Professor Avid Loeb, member of the Harvard-Smithsonian Centre for Astrophysics in the US who has not ruled out that the mysterious, distant signals may be the result of advanced alien technologies.

Professor Loeb is the scientist who suggested that ‘Oumuamua, the mysterious interstellar object that zipped through our solar system last year, may be an alien space probe, sent from a distant alien civilization to study our solar system.

The mysterious signals, which have become more common in recent years were first detected by scientists in 2007 when a fast radio burst was spotted in data obtained back in 2001.

“Knowing that there is another suggests that there could be more out there. And with more repeaters and more sources available for study, we may be able to understand these cosmic puzzles – where they’re from and what causes them,” said Chime astrophysicist Dr. Ingrid Stairs, from the University of British Columbia.

The newly detected FRBs were reported by a Canadian-led team of astronomers )who hunt FRB’s) in two scientific papers published in the journal Nature (here and here).

“Whatever the source of these radio waves is, it’s interesting to see how wide a range of frequencies it can produce,” team member Arun Naidu, of McGill University, said in a statement.

“There are some models where intrinsically the source can’t produce anything below a certain frequency.”

The repeating fast radio burst, called FRB180814 was intercepted by the CHIME radio telescope, the Canadian Hydrogen Intensity Mapping Experiment.
And while we don’t know what causes the signals, researchers say that whatever is producing them continues functioning after they’ve been sent into space.
“It can’t be cataclysmic,” explained Shami Chatterjee from Cornell University in the US, a researcher who was not involved in the latest studies published in the journal Nature.
“It has to be a mechanism that allows whatever it is producing to survive. You could imagine two neutron stars smashing into each other and producing an explosion and pulse of radio waves, but that would destroy the neutron stars, so you couldn’t have it repeat after that.”

Curiously, out of more than 60 Fast Radio Bursts detected to date, repeating radio bursts have only been picked up once before when researchers using the Arecibo radio telescope in Puerto Rico detected the FRB in 2015.

“Until now, there was only one known repeating FRB. Knowing that there is another suggests that there could be more out there,” added CHIME team member Ingrid Stairs, an astrophysicist at the University of British Columbia.

“And with more repeaters and more sources available for study, we may be able to understand these cosmic puzzles – where they’re from and what causes them.” 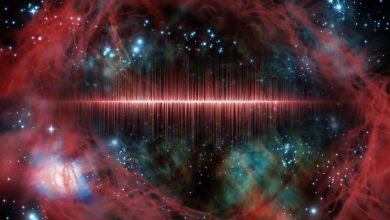