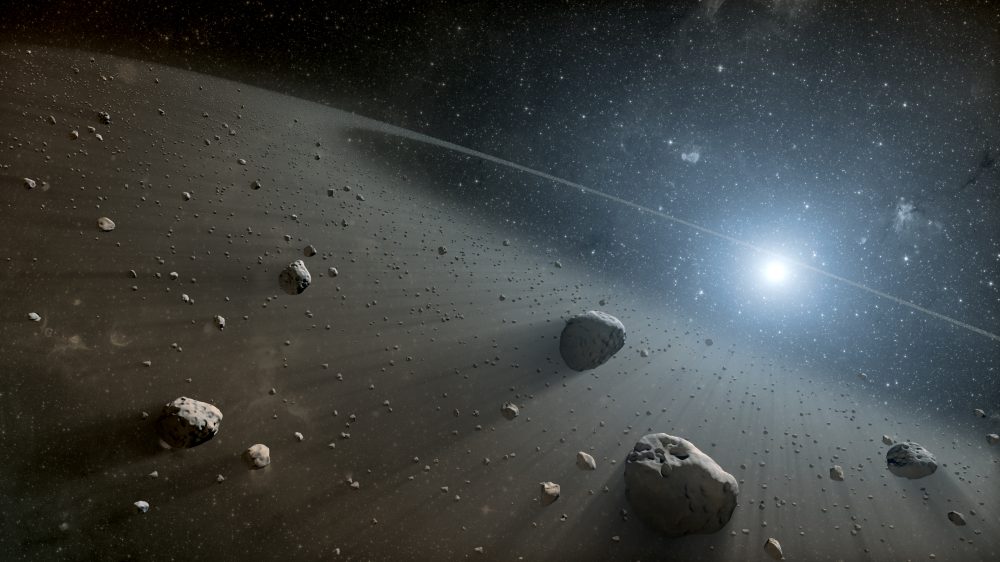 The main asteroid belt is an unexpected place to find red asteroids.

Astronomers have unexpectedly discovered two unusual objects within the main asteroid belt, a region in space located between the orbits of Jupiter and Mars.

One of the things that took experts by surprise was the color of these asteroids (red), but also the fact that these objects should not be there.

This is why researchers took a special interest in them. A study of the objects further revealed that there are traces of strange organic matter on the surface of the two asteroids.

1. These two unique objects were discovered in the last century, but their color was determined only recently, using modern equipment.

3. Typically, in the inner solar system, objects reflect in blue. Extra-red space bodies are mainly represented by the so-called trans-Neptunian objects. Such objects, as the name implies, are located beyond the orbit of Neptune at a great distance from the Earth. The two red asteroids in question should not even be located in the main asteroid belt.

4. Space researchers believe that the red color of the asteroids indicates that the objects came from the region of the solar system in which Neptune orbits.

5. Yet, when astronomers performed spectroscopic observations of the objects, they discovered that the two asteroids were even redder than the typical D-type bodies. The red color was found to be due to organic substances that cover the space objects.

6. Based on their knowledge, scientists have suggested that the objects entered their current orbits early in the formation of the solar system. Most likely, such a fate befell them due to the movement of the giant planets and their movement into today’s stable orbits. It is believed that these movements “knocked out” many objects from their then orbits.

7. Some were thrown towards the Oort cloud, and, possibly, outside the solar system. Others, on the contrary, were “pushed” towards the center. This, for example, triggered the Late Heavy Bombardment, the effects of which we can see by looking at the moon.

8. Therefore, it is likely that it was the gravitational processes caused by the movement of the giant planets that led to the fact that two red asteroids moved from the far edge of the solar system into the main asteroid belt.

9. In order to obtain complex organic matter on their surface, the asteroids should have been exposed to very low temperatures. This suggests that initially the asteroids were covered with a layer of ice before they fell under the influence of solar rays. If the objects were too close to the Sun in the beginning, they would not have had enough ice to form such a complex and unique organic structure.

10. The discovery of the color of these red asteroids indicates that there could be a bigger population of such objects in the Main Belt. The next step should be to estimate their number and possibly consider the asteroid belt as a possible destination for a research mission. If there are suitable red objects this close to us, there will be no need to send missions to the Kuiper Belt when we can study the same type of objects in the Main Asteroid Belt.