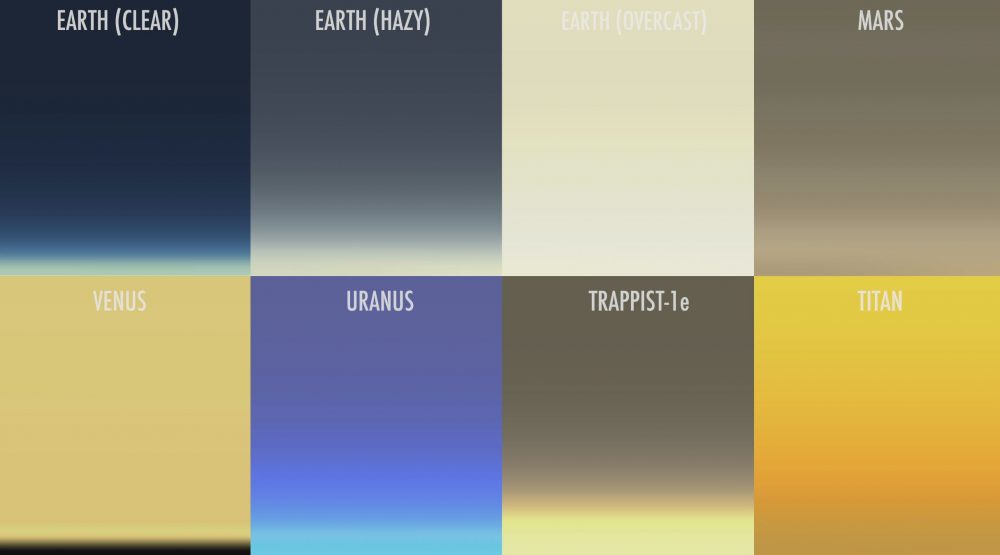 Check out what sunsets on different worlds would look like with the help of this NASA tool.

A new tool developed by scientists at NASA’s Goddard Space Flight Center allows us to see what sunsets look like on planets in our solar system like Mars, Venus, Uranus, or moons like Titan, but also what a sunset may look like on distant exoplanets like Trappist 1-e.

The new tool is part of the Planetary Spectrum Generator used to synthesize/retrieve planetary spectra (atmospheres and surfaces) for a broad range of wavelengths 50 nm to 100 mm.

Have you ever imagined seeing what a sunset looks like from Mars? How about Venus, or a distant world such as Uranus? Although humankind has not developed the necessary technology to travel to another planet and witness sunset or sunrise, we are pretty close to making it possible.

In the meantime, a NASA expert has created a stunning video illustration of what sunsets look like on other planets, revealing an intricate set of colors that are different depending on what planet the sunset is observed from.

A planetary scientist at NASA’s Goddard Space Flight Center has created simulations of the hues of sunset on the surface of various worlds in our solar system.

One day, a probe could descend through Uranus’ atmosphere, with Villanueva’s tool that helps scientists interpret the light measurements that will reveal its chemical composition.

To validate his tool’s accuracy, Villanueva simulated known sky colors from Uranus and other worlds, some of which are shown in the following videos.

Villanueva’s simulations show how our Sun appears to be set from someone’s perspective on these worlds.

As these planets rotate away from sunlight, which happens during a sunset, photons scatter in different directions depending on the photons’ energy and the types of molecules in the atmospheres.

The result is a palette of colors that would be visible only to those standing on the surface of these worlds.

Villanueva’s simulations show the entire sky’s views as if you were looking up at the sky through a super-wide camera lens of Earth, Venus, Mars, Uranus, and Titan.

The white dot represents the location of the Sun.

The halo of light seen towards the end of sunset on the hazy Earth occurs due to how light is scattered by particles, including dust or fog, suspended in clouds.

The same is true of the Martian halo.

On Mars, the sunset changes from a brownish to bluish color because Martian dust particles disperse the blue color more effectively, NASA explains in a statement.

These atmospheric simulations are now a new feature of a widely used online tool called the Planetary Spectrum Generator, developed by Villanueva and his Goddard colleagues at NASA.

The generator helps scientists replicate how light is transferred through the atmospheres of planets, exoplanets, moons, and comets to understand what their atmospheres and surfaces are made of.